The Lean Post / Articles / How do I know if someone is really incompetent or just struggling?

How do I recognize when someone is really incompetent? Sometimes people don’t have results because they’re put in a tough spot.

Yes, absolutely, and sometimes we like someone because they do something useful for us although they’re totally incompetent in everything else. Hard call. You are right it’s very hard to distinguish the person’s aptitude from the conditions they’re plunged into.

For instance, I can think of a young lean manager we all thought had enormous potential who decided as her next step to manage an operational team – her first management gig. For several weeks to months, we saw her struggle, to the point of losing confidence and making herself ill.

One of the nicest guys I know to have a beer with has ruined every team he’s been entrusted with, leaving behind poor performance, acrimony, and people at each other’s throat.Then a toxic person who was on her team left, and in a matter of a couple of months, the team is now hitting all its targets with top scores in the employee satisfaction survey. This is exactly as you describe. This junior manager had high potential but was put in precisely the one situation she was unprepared to deal with: working with someone with a grudge who was constantly second-guessing her, aggravating customers,  and whose response to all attempts to work together was passive aggressive. As a first-time manager, no matter how talented, our young friend didn’t have a chance – until conditions changed.

Conversely, when I think back to all the gemba situations where we’ve changed from one manager to the next and results have turned around in the same conditions and with the same teams, I’ve learned to look for two criteria in people:

Understanding quality work doesn’t necessarily mean being a perfectionist. There are a lot of real-life situations, particularly in project work, where “ship it, it will have to do,” is a sensible decision. But it’s very different to see the gaps with the ideal and live with them from assuming that whatever we do is good enough. Think about it this way: 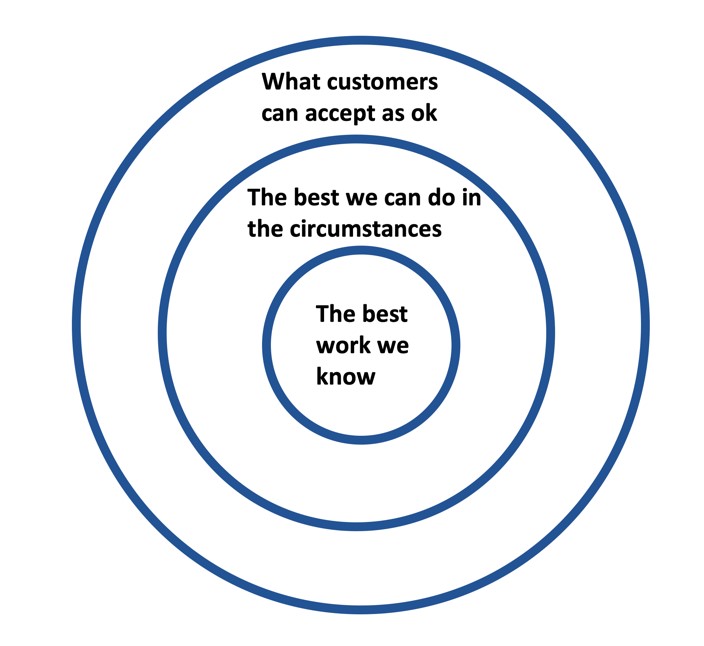 We’re looking for someone who is constantly thinking through these three circles:

In practice this is fairly easy to spot as all it takes is listening to what the person says and look at their judgment calls. Sure, some people bamboozle you by talking a good game and no action, but I’ve found that if you look at the quality compromises the person makes, you have some idea of their own quality standards and how important these standards are to them. The trick here is knowing beforehand of the typical trade-offs in the job and looking into how the person handles them in practice, on the gemba.

The second dimension is also relatively easy to spot if you’re distant enough from the situation and the emotions involved. When you throw someone into play, there are two kinds of people:

We end up with the four following scenarios: 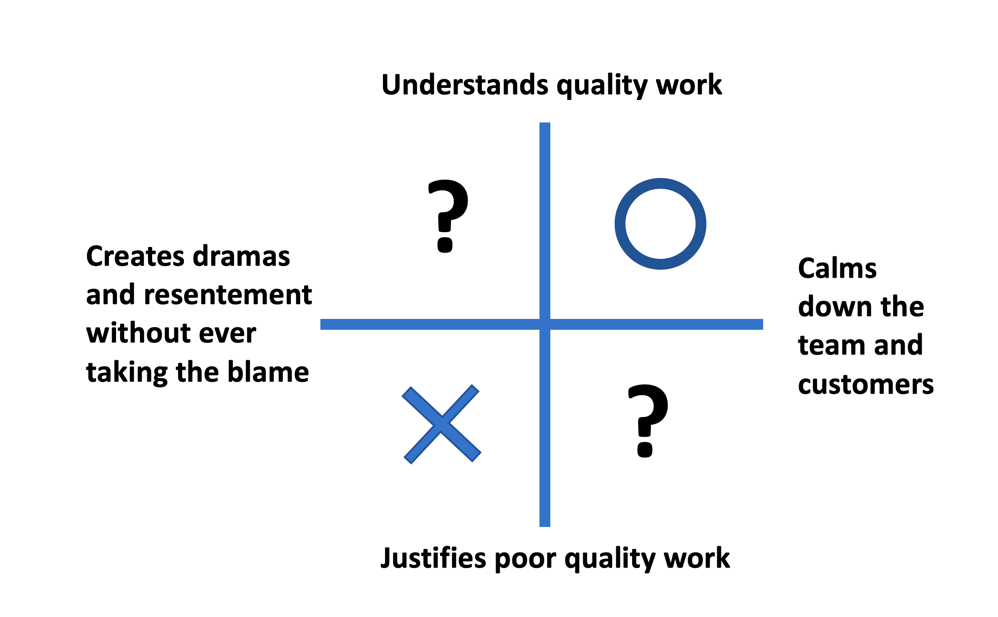 To answer your question, when someone is in the lower left-hand corner, no matter how friendly or useful they seem – you can make the hypothesis that they’re incompetent. It’s not the situation, it’s them. When someone is in the upper righthand corner, chances are you never hear about them because all goes smoothly. If someone like that struggles, look to the circumstances.

The question marks, obviously are the two other cases. I have no magic solutions as these are not that easy to spot or to know how to handle. From the gemba, I’d say that the tie-breaker question is: are they coachable?

The young manager I mentioned was seen as a high potential by senior management because she enjoyed being coached as a lean officer, was pragmatic and well-liked on the field, and tried suggestions from more experienced people without having to be prodded and pushed. When she took the operational job her greatest difficulty was figuring out what she needed to learn – and then her senior managers didn’t really help because the advice they gave her rested on too many assumptions about management – she had never managed a team. But she still took it, made up her mind, and moved forward. She is coachable.

No one is perfect. No one gets everything right all the time. But some people are willing to learn and some are not. I guess that the best way to distinguish the person’s potential from the situation they’re dumped in is whether they themselves seek coaching and learn, by picking one thing to improve after the other, rather than accept poor quality and pass the blame around.

Competence or incompetence has indeed a lot to do with the gap between the person’s experience and the situation they land in. What we can see is where they start and how they handle customers and their team, and how deeply they delve into understanding quality (and success) or just try to stay in the game. Never easy!