The Lean Post / Articles / How Team Leaders Should Divide Their Time

Through my career, I’ve seen one group of individuals on the shop floor who need the most support and training – yet instead receive weak training and inconsistent support. They are “team leaders.”

These people make or break operations. They are the “glue” that holds the pieces together.

Often I have seen competent team members who are promoted up through the ranks, or, in unionized plants, their seniority allows them to inherit the role of team leader. But in most of those cases, the management expected them to immediately know what to do, how to do it, and how to manage their time without the right degree of training and support. In reality all these new team leaders had in the way of knowledge was based on copying what the last person in their position used to do.

What a daunting predicament to place someone in! But this does routinely happen and then we wonder why we see issues on the floor. It’s often because they are self-inflicted by management’s inability to train and support these critically important players.

Toyota and a few other capable Tier One companies I have worked with over the years see the real value in the role of the team leader, and they put in place the support structure and guard rails to ensure people in these critical front line roles can learn, be coached and then succeed.

My sketch outlines work I did in one former organization to map out and deploy how front line team leaders should divide and manage their time. 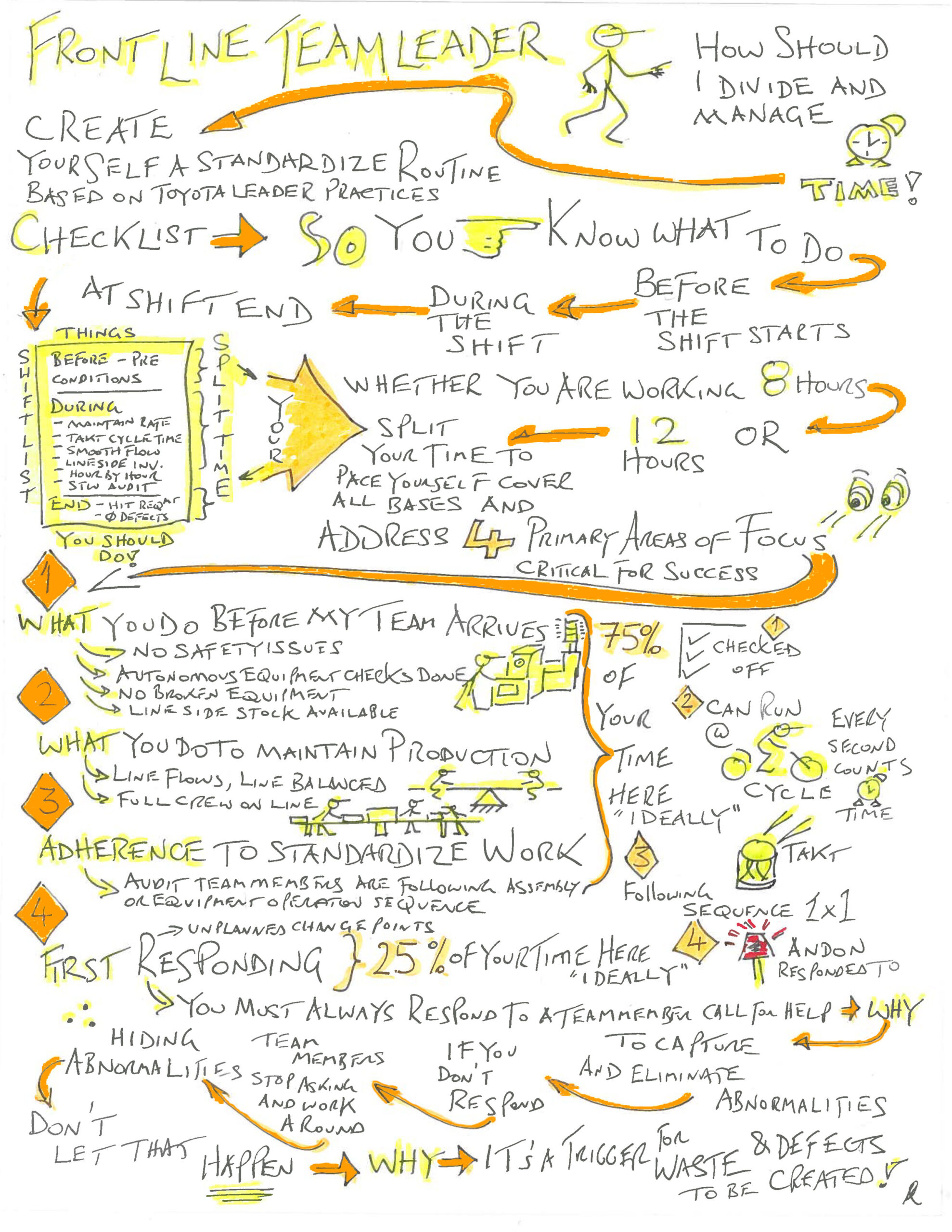 This approach, encompassing what to do before the shift starts, in the middle of a shift and at the end of a shift, was quite similar to the approach of my customer at the time, Toyota NA. To this day I continue to deploy these principles as tried and tested ways of developing people in this role.

The team leader model I used encompassed the four critical areas of floor management that the team leader role leads, is held accountable for and is responsible for driving. My sketch lists the series of focused tasks under these areas where a team leader should spend their time in repeatable and cycled patterns of routine standardized work.

Don’t forget to check out the animation as well which helps to reinforce the content in the sketch.

Born and raised in the United Kingdom, Andrew Quibell entered the automotive industry in the mid 1980’s as a trainee quality engineer. He advanced through the ranks into quality management and worked in several established tier-1 companies in the UK before joining the Textron division Kautex in 2002. Quibell entered Textron’s Lean Black Belt program in 2006, eventually becoming a leading lean practitioner in the business, working primarily in high volume manufacturing. His roles at Kautex included VP CI Global and Director, Quality – Global.

Prior to leaving the automotive sector, Quibell sat on Textron’s Quality & Continuous Improvement Council while also working as a regional advisor within Toyota’s tier-1 supplier base organization BAMA. Currently Quibell holds status as a Chartered Member of the UK CQI, a Senior Member of the ASQ, an Incorporated Engineer within ICME, and is registered as a principal auditor in QMS with IRCA.

In January 2016 Quibell left Kautex and moved into the printing industry, joining CIMPRESS – a leader in mass customization of printed products – as their Global Head of Quality Assurance.  Presently Andrew lives with his wife and daughter in the Windsor / Greater Detroit area.