In my 10 years as a lean consultant, I’ve found that the most successful lean managers are often the ones who want to implement a suggestions system early in their lean journey. They know that lean culture encourages the participation of all employees and, in a certain way, they want to give voice to their collaborators right from the beginning.

Unfortunately, many organizations take this step without first making the necessary changes that affect their companies’ decision-making processes. For this reason, they often end up raising tensions among employees that result in some of the situations shown in the following illustration. 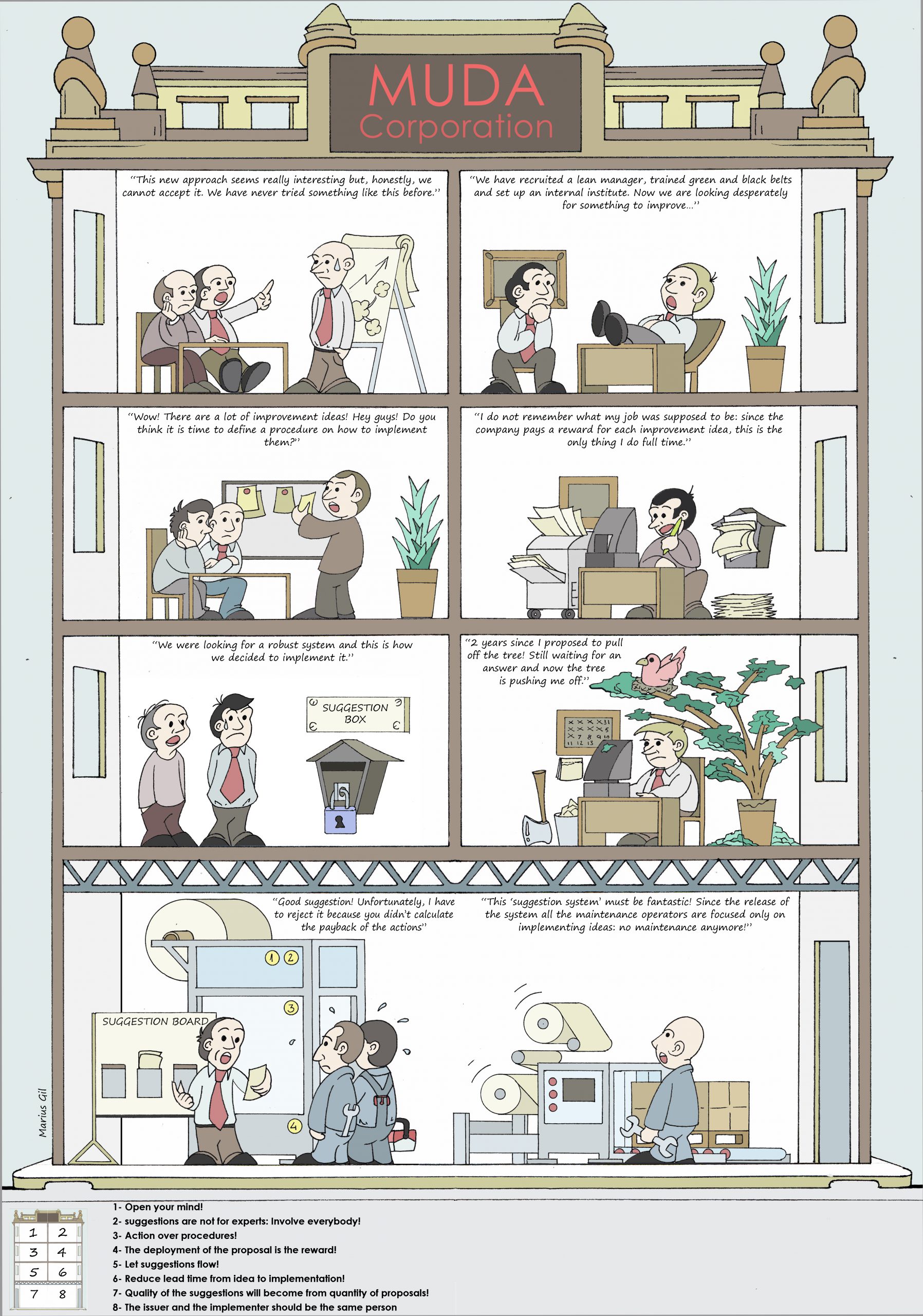 In order to redress how the system is being implemented, it is necessary to modify certain attitudes as well as some organizational structures. It is a time-consuming cultural transformation that every company should address along the lean journey. One article that best reflects this need for change and the benefits of decentralization in decision-making is J.P. Womack’s Fewer Heroes, More Farmers, published 05/12/06, in which the author claimed the need to reduce heroic behaviors in favor of a more down-to-earth “farmers’ approach.”

I remember a particular case working at an organization where the decisions and actions were traditionally taken by the top managers at each of the factories.

After some time running a sort of suggestions system, the lean coordinators realized that absolutely all of the suggestions issued would end up, with no exception, on the table of the plant manager for approval. This meant an extension of the time needed for approving the suggestions. As a consequence, most of the employees took that slow response as a lack of response to their proposals. So, they decided to stop providing new suggestions. After a while, some KPIs indicated that the number of suggestions was sinking. Under the effect of this unexpected situation, top management reacted in an astonishing way: in order to reverse the negative trend, they proposed to pay an economic incentive for every suggestion issued. Naturally, this didn’t improve anything.

As soon as management becomes aware that implementing a good suggestion system means more than placing a set of mailboxes at some corners of the plant, some organizations (not all) are able to redress their approach to it. They delegate the issuance, the approval and the implementation of the suggestions to the employees who submitted them, leaving them with the real autonomy.

This case is a good example of the need to redress the implementation of a suggestion system by delegating the issuance, approval and implementation to the staff of each of the processes, thus empowering the real actors of the program. I experienced many other situations like this during my lean career, in which a failure to change behaviors first derailed a well-intentioned suggestions system. I’ve now compiled the most memorable unchanged behaviors in this illustration for your reference. Keep an eye out for them and intervene as soon as you see them – it could keep your suggestions system from failing.

Marius Gil was introduced to Lean Management while he was working in the automotive industry some twenty years ago. From that early date until present he has coached a large number of professionals during the transformation process of their company. Today, Marius combines his continual learning process with other activities addressed to spread the lean culture through teaching, writing, consulting and designing training games.