Editor’s note: Two and a half years ago, the Lean Post connected with Zack Rosenberg, co-founder of SBP (formerly Saint Bernard Project). SBP is a not-for-profit disaster-resilience and -recovery organization, rebuilding homes that were destroyed by Hurricane Katrina in 2006, and other areas in need. SBP is unique in that it uses lean techniques in its rebuilding projects, which allows them to erect homes faster and significantly below market rate. It was founded after Rosenberg and Liz McCartney volunteered rebuilding homes in St. Bernard Parish after Hurricane Katrina. Frustrated by the inefficiencies and slow progress they encountered with traditional rebuilding methods, the two founded SBP with the mission of promoting disaster resilience and recovery for those in need.

Today, SBP continues this work to assist victims of Hurricane Harvey in Texas. In honor of their commitment to those in need, the Lean Post presents a video of SBP’s presentation on their work from the 2017 Lean Transformation Summit, as well as LEI’s original interview with Rosenberg from 2015.

Learn how you can help SBP in their mission through their Hurricane Harvey “Recovery Now” Fund.

LEAN PRINCIPLES ARE CHANGING HOW THE U.S. RECOVERS FROM TORNADOES & FLOODS 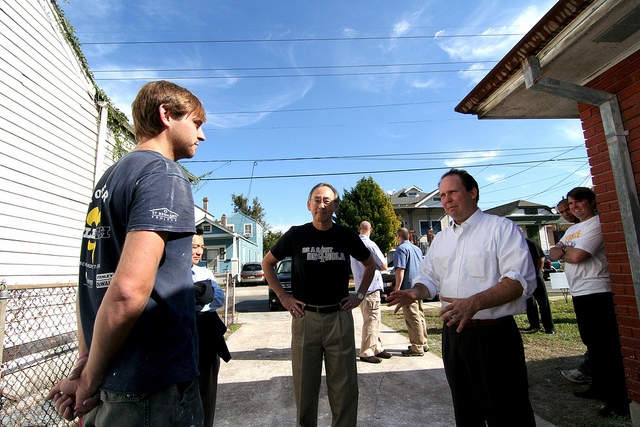 Zack co-founded SBP with his wife Liz McCartney, after volunteering in New Orleans six months after Hurricane Katrina.  Disturbed by the lack rebuilding and predictability of recovery for most families, Zack and Liz began asking hard questions to understand the factors leading to the intolerable conditions faced by disaster survivors. From this desire to minimize the suffering caused by delayed recovery, the trial attorney and school teacher began rebuilding homes for New Orleans most vulnerable populations.

Leveraging private-sector innovations from Toyota and philosophies from UPS, Zack transformed SBP, adopting a culture of problem-solving by teaching staff and AmeriCorps members to surface them at every level. This ethos of continuous discontent has enabled SBP to become the leading long-term recovery nonprofit, rebuilding more than 1,860 homes nationwide, and has grown to include more than 30,000 volunteers annually, 240 AmeriCorps members and 76 staff.

SBP now looks at a host of interventions designed to shrink the time between disaster and recovery, resulting in much-needed systems change in an otherwise unchanging landscape that is disaster recovery. Zack and Liz co-authored the book, Getting Home, which was released in March of 2019.

Getting Home chronicles the founding of SBP, and how SBP partnered with Toyota to apply the lean principles of the Toyota Production System (TPS) to rebuild homes and lives following natural disasters throughout the U.S. and its territories, creating a culture of continuous improvement within SBP to reduce the duration of time between disaster and recovery.