The Lean Post / Articles / Why does my team resist multi-skilling?

I’m trying to introduce multi-skilling in my team but am surprised by the amount of resistance I encounter from my team members. What am I missing?

Tough one. There are two immediate issues here. First, how deeply are you trying to multi-skill? And secondly, are you taking into account that learning a new skill is, quite simply, hard?

Typically, when managers think about multiskilling they approach this abstractly by listing the core competencies in the team and evaluating each person on their level of proficiency on each competence. In lean we use the following framework:

Then they’d draw a matrix, as described here in Jeff Liker and David Meier’s The Toyota Way Fieldbook: 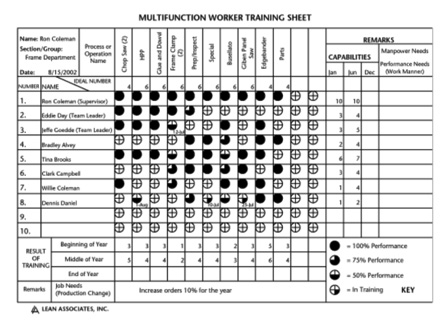 and start thinking of strategies for cross-training people – a training timetable, a program, etc.

Framed this way, this is (again) a people-free solution. Unless there’s already an established culture of cross-training and your team members expect this to happen and have started from day one with courses and tutoring, you’ll find that you’re doing something to them, not with them.

For any of us, learning a new skill is no easy thing – it requires both wanting to and the grit to pursue through the difficult training period. Furthermore, some skills require much more of a technical background than others. It’s relatively easy to learn a new technique in the same field, but learning something from another field is very hard because one has to absorb first a lot of the fundamentals.

For instance, a maintenance company that sent technicians on-site realized that it could be sending two people independently to the same site for, say, an electrical problem and mechanical maintenance. The obvious idea was to teach electricians to do mechanical work and vice-versa. However, electricians are generally totally unprepared to learn mechanics and mechanics can’t see electric work beyond bundles of incomprehensible wires. Furthermore, if you force the training, you rob your guys of their strengths by asking them to take on jobs in which they feel less than competent (as opposed to those where they’re confident of their skills). No wonder they resist.

The first trick is to look into the work carefully and look for next step developmental possibilities. For instance, in the previous case, the leaders realized that they didn’t need to train electricians to be mechanics in general. The most frequently performed mechanical activity was to change filters. They narrowed down the training for electricians to changing the filter and they overinvested in this narrow skill. Some electricians refused to do it, but most accepted to learn this narrow skill because they felt reasonably confident they could become competent at it without having to learn mechanics from scratch.

The first part of the issue you’re facing is to make sure you have identified specific skills area where people feel they can help each other by learning to do a new thing without having to learn an entire new domain which would be both scary and lead to loss of specialty.

The second issue is that learning anything new is hard. A learning curve is built on performance progress at every new cycle of doing the same thing again and again, just as you practice a hitting a ball with a golf club. Typically, learning curves look like: 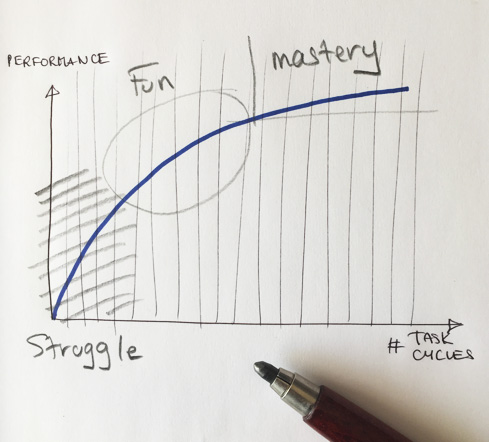 There are three phases:

As a result, if you’re serious about multi-skilling, you need to face two complex issues: first breaking down the jobs into achievable steps in terms of small concrete skills, which means finding chunks of work that produce some performance without demanding a deep investment in learning the theoretical background, and second holding people’s hand as they go up the learning curve and the emotions that go with it.

One key question therefore is: have you thought about what’s in it for them? Not in terms of carrot and stick, but in terms of how each of your team members can visualize the personal benefit if/when they do acquire the new skill. What do they intend to do with it?

Fascinating topic and yes, indeed, one of the greatest sources of improved performance and added flexibility from developing people. It is difficult, however, and needs quite a bit of thought first to figure out how to achieve multiskilling with the team rather than doing it to them.