LEI CEO Eric Buehrens gave a challenging talk about the future of labor and our obligation in the lean community. Noting the decline of manufacturing as a share of total employment in the US economy over the past 50 years at a time where the total value of the economy has remained over ten percent, Eric noted that “this is a picture of what productivity and technological improvement looks like.” And he noted that we in the lean field “have had something to do with it.”

And yet such change causes anxiety for people who fear that robot workers will take their jobs. Anxiety about the range of ways that automation and mechanization and AI (as it enters into knowledge work) are bringing disruptive changes everywhere. Things seem to be under attach, and these shifts bring about profound changes in the social contract—the legal, financial and regulatory contract between employer and employee. 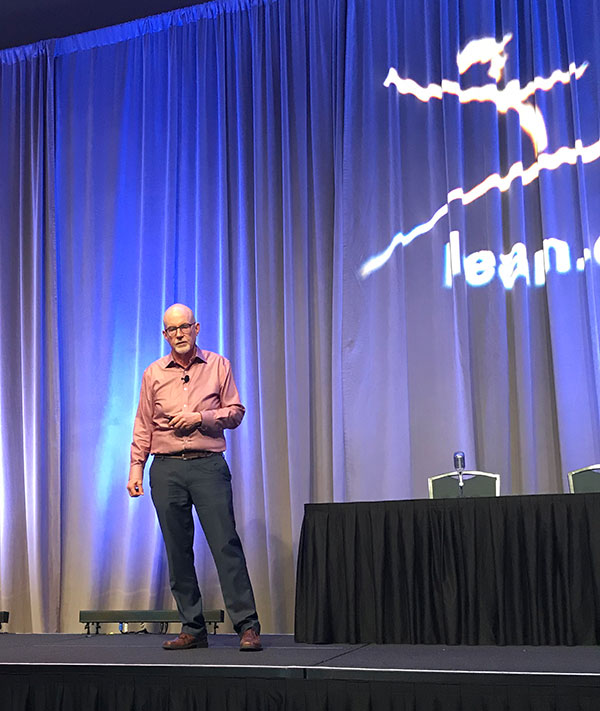 Noting the often overlooked impact of Uber on the drivers themselves, Eric cited data showing that 54 percent of Uber drivers are making less than the minimum wage. The low prices paid by consumers has been essentially subsidized by the uber drivers and VCs. And that on a systems level there are other costs that have been externalized, leading New York City to consider a fee on Uber to account for the congestion it has caused.

Looking forward, Eric discussed the relentless march of machine learning in areas such as medicine, where sophisticated machines are to read retinal scans, threatening to replace highly skilled knowledge workers with years of training. He cited a machine that has learned how to beat the best chess champion in the world. The arc has gone from teaching a computer to play chess, to having that computer be able to be the best in the world; the process now enables the computer to teach another computer the game. At this point “we don’t even know what the machine knows. Its logic is beyond what we can comprehend.”

Looking ahead, Eric referred to a Ted talk that asked whether machines might one day take over a huge amount of work, leaving a surplus of labor. While he called this “a good problem to have,” he identified it as a mixed blessing, something that one could be both optimistic and pessimistic about.

Sharing the slide with the word “Generation,” Eric said “I found myself thinking a lot about this word as I prepared for this talk.”  In all of its meanings it has weight and resonance. As a noun the word describes all of the people born and living at the same time. In business and technology we use the word to describe things we make. Do we want to use the current or the next generation product? Generation is also used to describe lifetime: the human generation. Families come, they have families people pass away. Companies come and go. Moreover we refer to the life of companies in the same way. And today, “it seems like the pace of birth and death of enterprise is coming faster and faster.”

And finally, Eric referred to the use of generation as a verb: to bring something into being.

This use of the word pointed to lean thinking moving forward in the world of work:

“The future calls us to be creative, generative. Our thinking need to mirror the changes in society that we see around us,” he said. Calling for new thinking to make work more productive and humane, he said this to the people gathered at the summit:

“There are many people in this room thinking about how to make work more productive and humane…Our job in the lean community is to find these people and work with them to create the future to be generative as we think about the world of work in the future.”

Slides of his talk appear below: