The Lean Post / Articles / I read everywhere that in lean we should focus on process over results – does that mean we ignore budgets?

I read everywhere that in lean we should focus on process over results – does that mean that we need to ignore budgets altogether?

No, of course not! One of the puzzles of the old days of lean was that Toyota seemed to be completely focused on improvement rather than costs (“Costs do not exist to be calculated. Costs exist to be reduced” is the famous Taiichi Ohno quote) and yet, in product development, Toyota had the most detailed and rigorous costs tables anyone had ever seen.

One hard issue is that costs are a fiction – a necessary fiction, but a fiction nonetheless. Price, of course, is a fact. I know how much I paid for something. But cost is an opinion. Imagine I need to print an invoice to send to a customer, but my printer’s ink cartridge is empty. I know how much the cartridge will “cost” me in terms of price – what will appear on my credit card bill. But what about:

And that’s the simplest element – a component. When we try on the gemba to establish the target cost for a project, say a part for a manufacturer, we immediately hit endless problems. How do we attribute the cost of the tool to the parts?  It completely depends on how many parts we’re going to sell (which we don’t know). How do we attribute engineering time to the part? Engineers rarely work on one single job, and then testing and so on brings in other people as well. What about the cost of controlling for good parts? Or more esoteric problems if we work across borders: how do we impute exchange rate variations?

Accountancy has to be exact – that’s the point of it. The books have to balance, so costs are estimated more or less truthfully to make sure the numbers do balance and shift as much of the real costs to the next door department, or better yet, to no department at all – as variances that can be averaged out over the whole company.

Knowing that, without a budget, we can’t have any notion of whether what we do is profitable or not – so we need the budget.

But we also need kanban cards.

A customer buys a product, this becomes a kanban card to be served. Then each of the parts themselves become kanban cards as well: 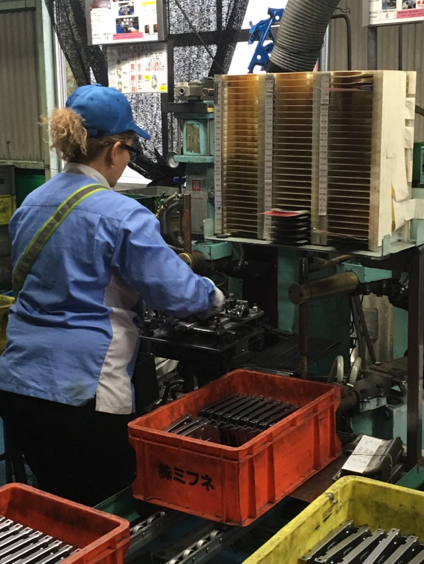 Now, obviously, we don’t have Star Trek machines that assemble the part here and there out of air molecules, so we need to have a few parts in advance. But kanban essentially shows you three distances:

Each of these distances have costs, as the work, visualized through kanban, that is held either in inventory or in backlog should pay rent for all the fixed costs of the business. Lead-time is a true reflection of how well you use your capital to deliver what customers want.

Tracking the kanban cards allows you to better understand your capital costs in three main ways:

There is nothing magical about this, and indeed, nothing easy. Most of Ohno’s first book, Workplace Management, is about his frustration in teaching the bean counters what real costs are, as opposed to accounting shenanigans.

But what does happen if you somehow manage to combine the contradiction of “Budget is God” and “Don’t Mess With The Kanbans” to use my father’s language is that, progressively, you learn to reconcile accounting costs with real costs, as Ory Fiume has described in Real Numbers.

When lean old timers say focus on the process, not the results, they usually mean that financial results come out of 1) doing the right things and 2) doing them right. They’re not saying ignore financial results and pray for the best – this is a “lean” interpretation that appeared much later. In the early days, believe me, the very same guys who would beat you up about putting more energy in shortening lead-times would grill you on your understanding of costs to the cent.

Similarly, I don’t know where they’re at now and every plant is different, but the Toyota plants I visited used to insist quantifying every creative idea in monetary gains, with ridiculous numbers such as 0.2 cents per part. The idea was one step, one second, one cent: familiarizing all team members to the frugality implied in kaizen.

What they mean is starting by the budget numbers to make decisions is like trying to push the needle to get the engine to run faster – it’s plain silly. On the other hand, you really, really need to understand the financial impact of what you do to grasp how the business works. So the trick is to start with the kanbans (the process), look into all the problems they reveal and engage people in solving them to improve the technical processes, and progressively align your unit costs in your budget to something that makes more sense, that is “tru-er.”

“Don’t mess with the kanbans,” yes – but also remember “budget is God.”