The Lean Post / Articles / Leading with Respect is Not a Soft Skill: An interview with Mike Orzen

Leadership is not often thought of as a hard skill, but Mike Orzen says it should be. I recently sat down with Mike to get his take on why leaders should view and treat it as a hard skill, specifically in the case of the Michael and Freddy Balle-developed lead with respect model:

What is the lead with respect model?

The lead with respect (LwR) model is about addressing both pillars of creating a highly effective organization. The two supporting elements are continuous improvement and respect for people – and what we find in almost every organization is that we’re very fluid in continuous improvement and the tools associated with it, but we really don’t invest much time or thoughtful effort in respect for people. The majority of leaders will say, “Of course I respect my people! They’re my most important asset,“ which is wonderful, but building a culture of respect for people requires well-defined behaviors, shared practices, and a clear roadmap. The LwR model gives us that through seven core practices.

What’s the danger of focusing exclusively on the continuous improvement column and disregarding the respect column?

By itself, a tools-based approach creates a temporary “sugar high” with only superficial engagement, leading to short-lasting, shallow changes that rarely sustain themselves. Tools are enticing because they are fun to learn, give the appearance of progress, and support an implementation methodology. This is where we think we know the solution and believe that if we just roll out the right set of tools a transformation will take hold. It’s a myth! Ignoring the second pillar of LwR is like trying to build a house with a single column. For years, we have known that a lean transformation requires two supports: continuous improvement and respect for people.

By definition, a hard skill is a teachable skill that can be defined and measured. That doesn’t sound like leadership – in this regard, how can LwR be a hard skill?

Great question. Leadership applying LwR is definitely a skill that can be taught. It’s true that when we hear terms like “lead with respect” or “leadership” or “connecting with people” we often label them as soft skills, which are more associated with getting along with others. But while LWR has some elements of a soft (social) skill, let’s not forget that the ultimate purpose of LwR is to drive performance and measurable results. When we focus on improving process through the development of people, the outcome is measurable and sustainable performance – and that characterizes a hard skill that can be taught, modeled, coached, and measured.

So LwR can be defined as a hard skill in that once it is learned it produces measurable results?

Exactly. There is nothing soft about it – you can measure and quantify the impact of LwR. As we engage our teams applying the principles of LwR, we develop higher levels of communication, trust, teamwork, engagement, and accountability. The measurable impact is the improvement of performance numbers through these developed skills. That includes everything from financials, to productivity, to talent retention, to quality, to delivery time, to safety. LwR is also a hard skill because it’s a difficult skill. It’s difficult in the sense that instilling new behaviors in ourselves is the hardest challenge we have as human beings. And in order to succeed we need to learn and then practice these behaviors consistently until they become the habits that define our leadership style.

The main quality you’ll notice in a leader who’s embraced the LwR model as a hard skill set is a challenging and engaging, yet very humble leadership style – meaning that they’re comfortable knowing and admitting that they don’t have all the answers. They realize that their role is to engage and challenge employees to constantly improve their skills to better manage work processes. This fosters respect within a culture of mutual trust and you’ll hear employees saying things like, “I feel valued in my job,” “I felt challenged today,” “I had a great conversation with my boss today” and “I feel trusted.” I think Joe Maddon, coach of the Chicago Cubs, captured it well when he said: “If you focus on the outcome, there can be fear. If you focus on the process, you can be fearless.” LwR is all about creating deep connections with people to eliminate fear and foster new levels of engagement and self-assumed accountability.

That sounds great. But what can go wrong when a leader doesn’t view LwR as a hard skill requiring learning and practice?

The leader who only perceives LwR as a soft skill may conclude that it is optional and won’t see the need to examine their leadership style or practice new behaviors. As a result, they’ll focus less on employee development and instead try to fix things themselves by telling people what to do. Their leadership style comes across to others as essentially saying, “I’m really not listening to your opinion; I’m just waiting for you to stop talking so I can tell you what to do.” A leader can implement visual management and standard work and other tools, but they won’t amount to anything because as soon as the lean consultant or coach pushing the lean transformation is out of the room, all lean thinking and behavior comes to a halt and the transformation fails. And this happens primarily because the leader doesn’t have the correct perspective on the nature of LwR. 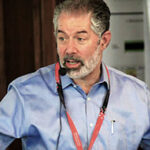 With a consulting and coaching career spanning more than 20 years, Mike has gathered a unique blend of lean, IT, healthcare, and operations experience that he uses to coach organizations pursuing enterprise excellence.

Very relevant and great perspective of leadership as hard skill.

Great model to develop for me especially progressing past “fix things” as that is what is currently valued in my organization.