The Lean Post / Articles / Muda Corporation: The Pitfalls of 5S

5S is undoubtedly one of the most popular lean methodologies. It is even enjoying more acceptance in sectors traditionally reluctant to embrace management systems that come from different industries (namely the automotive industry – “We do not make bolts and screws” is a statement that I have heard repeatedly). Among others, I am referring to the food industry, healthcare and pharmaceuticals. In most of these sectors, people feel that the story behind the implementation of 5S fits well into their way of working and their own culture.

Unfortunately, no matter how positive their approach to 5S is, I have seen some organizations confuse 5S with the whole lean philosophy. In other words, they tend to believe that lean starts and finishes simply by setting up a 5S program extended across the company. Eight other common mistakes I’ve seen companies make with their 5S efforts are featured in my new installment of my Muda Corporation series. 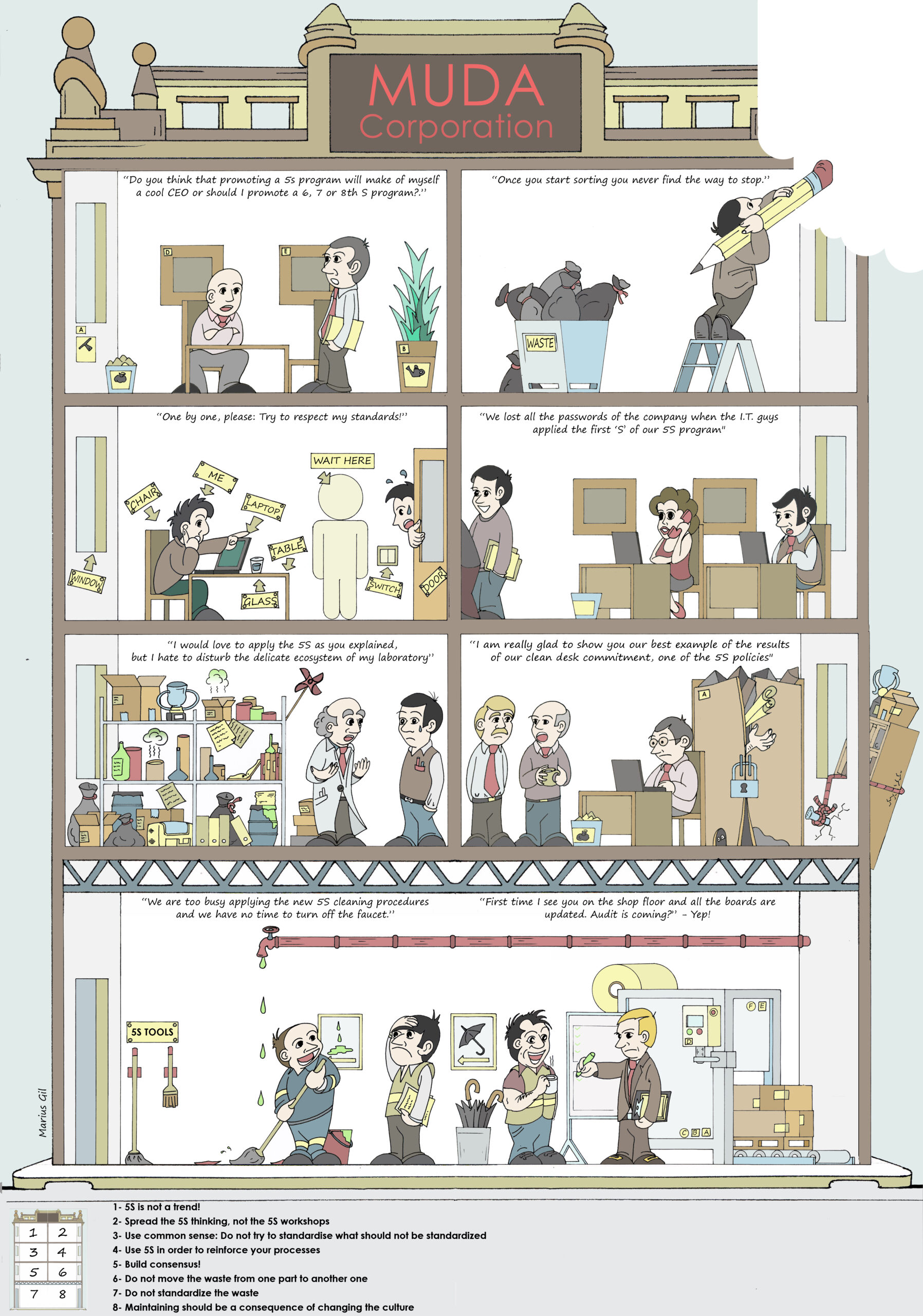 This reminds me of a case of a pharmaceutical company I worked with, in which a new plant manager had been recently appointed. At first glance, the plant showed excellent examples of visual management and 5S concepts. A closer look, however, made it clear that some of the panels were not updated, the standards were not respected and not all the instructions were known by the staff. When the plant manager inquired the staff about these anomalous issues, his fears were fully confirmed: under the pressure of the group policies, the staff misinterpreted the 5S concepts, overwhelming work areas with information panels signs and labels that rarely helped to the needs of the process.

To cope with this situation of widespread confusion, he took a bold decision: he removed all signs and panels, deleted zonings and drove the process back to the basics, obviating the bulk of useless information built up over the years in response to erroneous assumptions. For many months the support functions and even the management team worked hand-in-hand with the production team on the shop floor, discovering where new standards were required and consequently redefining them.

One year later the plant manager explained the benefits of the new approach: the plant was now fully equipped with the necessary standards and most of the support functions had established their office on the shop. But the most valuable lesson probably was that too much information can be just as wasteful as a lack of it.

Sometimes we mix up the need to apply the 5S concept in everything we do with the need to develop 5S workshops in all areas of our companies. The first point is a real must while the second one is clearly a mistake. All lean tools should be applied in line with a pull system: only where the process shows its weaknesses and we understand its causes.

Marius Gil was introduced to Lean Management while he was working in the automotive industry some twenty years ago. From that early date until present he has coached a large number of professionals during the transformation process of their company. Today, Marius combines his continual learning process with other activities addressed to spread the lean culture through teaching, writing, consulting and designing training games.