Tatsuro Toyoda died over the holidays in Toyota City.

Tatsuro led the company as president for a time in the 1990s, but many of us will remember him especially for his role at Toyota’s joint venture with General Motors, NUMMI, where he led the launch of the most important factory of a generation. Without NUMMI and its lessons, I doubt whether the Detroit Three would have even survived until the Great Recession when two of the three filed for bankruptcy.

I met Tatsuro immediately upon joining Toyota in 1983, probably my second or third day on the job in Toyota City. He was head of what was then called the “Fremont Project Office.” This was the team that had just begun working on the project to reopen the old GM Fremont, CA, plant (now the home of Tesla) to produce a variant of the Corolla, rebadged as the Chevrolet Nova. Tatsuro was polite, telling me of his time studying under Dr. Deming at NYU, and animated in relating stories of driving across the USA in a rented Chevy as a young man. 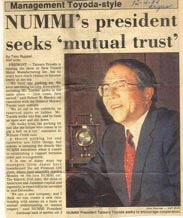 This clipping from a now-defunct Fremont newspaper shows Tatsuro preaching his key message just a few days before NUMMI produced its first car in early December 1984. Of NUMMI’s many lessons, none were more important than to show that a new type of working relationship between labor and management was possible. More than possible – necessary.

In the book, Smarter Faster Better author Charles Duhigg tells the story of Tatsuro inspiring NUMMI’s grizzled union workforce with the message that it was okay to admit you’ve got a problem. More than okay, it was requested. NUMMI’s, as all of Toyota’s famous assembly lines, was characterized by every worker being empowered to notify whenever they struggled or encountered a problem. Whenever a worker spotted a problem, he or she would send a signal (by pulling on an overhanging rope) – an SOS call for help – which would trigger a sequence of actions.  Help would come immediately, the problem would be contained, and corrective actions taken. If the problem couldn’t be solved immediately, the line would stop. Before long, the entire line, the entire plant, would shut down. That’s a big deal. Not unexpectedly, the NUMMI’s union workers – having worked long years under a GM regime that explicitly did NOT ask for their input – needed some convincing that it really was okay to pull the rope, which would bring help and even stop the line. Tatsuro’s words and actions were instrumental in winning their trust. In Duhigg’s account, word of Tatsuro’s personal encouragement to pull the rope spread through the plant like wildfire. Mutual trust were words that were on the lips of everyone, from Tatsuro on down. And more than words, actions turned the ideas into reality. Under Tatsuro’s leadership, the Fremont plant went from GM’s worst to its best, with the same supposedly “bad” workforce. Tatsuro and his team proved that it wasn’t a workforce problem, it was a leadership problem. A system problem. A trust problem. Under Tatsuro’s leadership, NUMMI really was a place of mutual trust.

It was 35 years ago that Tatsuro and his team worked their magic at NUMMI.  If those factory walls could talk, the stories they could tell! Those walls witnessed momentous transformations – from GM’s worst factory producing its worst quality (at a time when GM’s quality was horrendous) with the UAW’s worst workforce (even UAW national and international leadership had thrown up their hands in frustration in dealing with them) – to NUMMI’s revolutionary operational and labor management practices to today’s high-tech wonderland of Elon Musk. Unfortunately, the lessons of NUMMI seem to have been lost within those four walls.  I don’t know exactly, but I guess Tesla may have around a thousand or so robots. And I don’t know exactly but I guess it has about five times that many workers. The long-promised day of the lights-out factory may yet arrive, but I don’t expect it in my lifetime. Building great cars is still a matter of using people in the right way. Engaging their hearts and minds as well as their feet and hands. A Toyota-run factory like NUMMI is a wonderland of a very different kind – of effort to work with harmony between man and machine, labor and management, company and customer. That is the legacy of Tatsuro Toyoda and his team in Fremont.