Like many lean organizations, my company, Washington Health System, can at times spend way too much time on firefighting. Recently, our Transport Team was having a hard time with this. We had excessive amount of people reporting off for the day and long wait times for transporting patients, and these generally added an extra layer of stress to the organization during busy times.

The manager of the transport team was very frustrated, and felt she had no control over what was going to happen on any given day. We were eventually able to inspire the manager as well as the team to take control of their performance by following a simple leader standard work (LSW) framework. We put daily metrics in place. We held daily huddles that were largely improvement-focused as opposed to only having monthly staff meetings that were focused on monthly performance metrics. And the team would often try several improvements in a given week because they could tell quickly whether an  experiment was working or not.

The value of this daily work became apparent one day about six weeks into our journey. On that day the manager noticed an anomaly on the dashboard we use to track trips and requests. She said, “Look at this; someone’s not following their standardized work!” She did a quick report and could see that times were getting longer and it looked like things were going to get worse since our busiest time of the day was approaching, so she took corrective action. I stopped her and said, “Do you smell that?”

Looking at me like I was crazy, she said, “What? I don’t smell anything.” 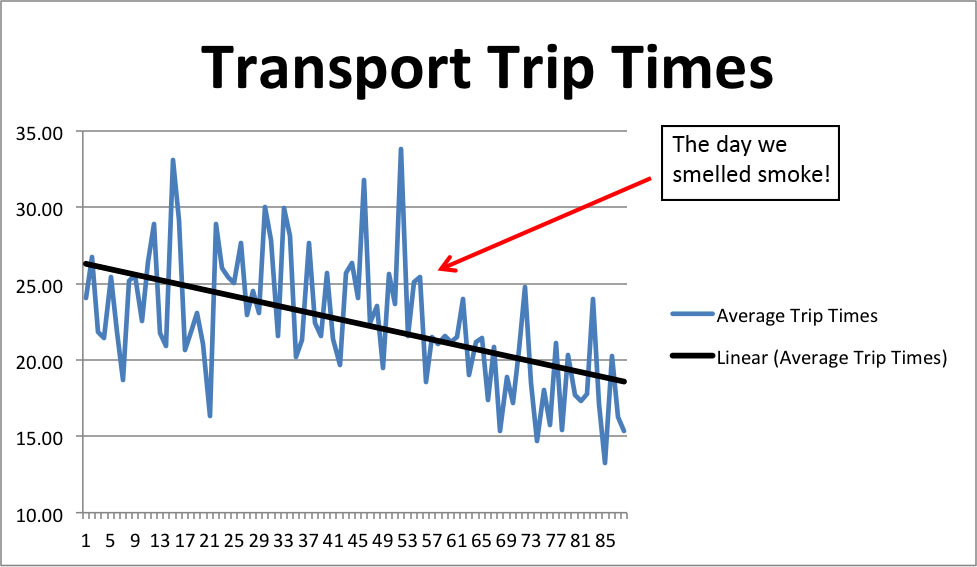 That day was the turning point. Since then we’ve reduced average trip times by 30 percent, but more importantly we’ve reduced the overburdening on our transport staff. Unplanned absences have declined by 90 percent. The team is generally happier and the manager loves her job again.

LSW is now our go-to for stamping out firefighting. For the purposes of this article and the situation above, my interpretation of LSW is scheduling the actions that will drive the organization forward on your calendar so that the things that come up every day won’t take over your week.  LSW provides the framework for prioritizing what needs to get accomplished every day, and builds a rhythm into your schedule as a leader so others know what to expect from you and when to expect it.

Stephen Covey wrote, “The key is not to prioritize what’s on your schedule, but to schedule your priorities.” That is the core premise of LSW as we use it at WHS: identifying time to spend on the priorities in order to avoid reactive management, aka firefighting. But to truly be effective, the correct priorities must be identified. What are the priorities of a lean leader?In the scenario above, we used five:

With those in mind, we started creating LSW by creating a list of all the tasks the manager did daily, weekly, and monthly. We included the tasks that should have been getting done but weren’t –one-on-one meetings with staff, daily metrics reviews, process or standard work audits, etc. The next step was to truly prioritize the list into what was most important for the long-term success of the organization. Then, starting with a blank calendar, we started building a theoretical plan of how each day, week and month would look with no fires. We just scheduled the priorities.

With the LSW framework and daily metrics in place, the manager was then able to truly use the priorities to guide her leadership of the team. For example, when working to understand fluctuations in transport requests, the manager’s visual controls indicated certain departments were essentially “batch processing” requests. When this would occur, she would then Go and See, ask why, and understand what was happening.  Then she would discuss with her team at the afternoon huddle and ask, “How can we improve this situation?” The team then would test their ideas and evaluate the impact based on the daily metrics, often the very next day. The results spoke for themselves.

But of course, you also need a way to sustain those gains. Notice that the priorities above are largely conceptual. We keep the concepts as the reasons behind these five key actions, which let us continuously improve our system and organization simultaneously:

What success stories or challenges have you experienced when using LSW?