The Lean Post / Articles / Is There No Other Lean Exemplar Than Toyota?

In preparing for tomorrow’s Ask Me Anything session on The Lean Post, I was thinking of questions that I’m very often asked and are very hard to answer. Two in particular came to mind:

In fact, I feel these two questions are closely related. I believe that while Toyota isn’t the only lean exemplar out there, it still gives us a flawless example of what lean truly is – a definition that is so often misunderstood. Let us try to disentangle the matter. 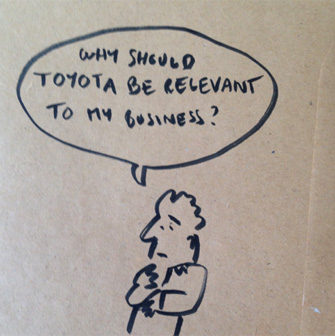 There are many, many lean successes outside of Toyota, and contrary to other management movements, the lean field is very well documented both in its successes and failures (and everything in between) in books, journals such as The Lean Post or Planet Lean, blogs and so on. Toyota’s special place comes from the fact that the entire company was built on a specific set of values and operating principles we have come to call “lean” – no other enterprise has such a long, continuing and enduring history with it.

“Leanness” (the Toyota Production System) is part of Toyota’s DNA, and still very much relevant today. For instance, when the company made an unprecedented $1 billion investment in artificial intelligence in Stanford and Cambridge, the head of this venture explained: “As extraordinary as the T.P.S. is, we believe it can be improved still further through the use of more data and more A.I.” This reveals two things:

To a large extent I’ve long considered the “lean” movement as our response to Toyota’s challenge – to create more value and less waste by building better products and services to satisfy customers better through developing people – it’s a very specific challenge, and Toyota remains ahead of the curve in this respect. So yes, Toyota is relevant now and, in many respects, what Toyota did in the late Seventies and early Eighties when it codified the TPS is still relevant as well.

Which brings us to the point that I believe is the most misunderstood about lean thinking. Not only is “lean” not a “thing” in itself, but a response to Toyota’s challenge; Toyota’s challenge is not an absolute either. Rather, it is the constant search for competitive advantage. The promise of TPS within Toyota, or lean thinking outside of Toyota, is that of a relative edge on the competition, not a blueprint for design thinking on a new kind of company (the fact that this over time does produce a new kind of company obscures the issue, because you don’t get there by seeking a new design or organization, but by honing your competitive skills on a daily basis).

This is bred in the bone at Toyota. In 1950, Toyota was basically bankrupt as a result of post-war trouble and a violent labor dispute and strike. The banks that bailed out the company imposed a restructuring plan which involved laying off workers and separating Toyota Motors from Toyota Sales. Kiichiro Toyoda, the company’s founder, resigned in disgrace and tasked the company to “Catch up with America in three years. Otherwise the automobile industry of Japan will not survive.” It took them longer than three years, but catch up they did.

The question is how? If you are a small, parochial, provincial company in a dominated, saturated market, what can you do? Furthermore, having been badly burned from their near-bankruptcy episode, Toyota executives committed to the additional constraints of no outside financing and no more strikes. What they then determined to do, which later led to the full TPS, was to seek competitive advantage through internal operation effectiveness rather than playing the game the way it was played by all competitors. This led them to seek two very clear industrial strategies:

Many lean thinkers I meet tend to discuss “lean” as a set of organizational design rules. They seek a model of efficiency, which can be applied to redesign their companies. My hunch is that this misses the profound lesson Toyota can teach us: relentless continuous improvement is a competitive edge that we can use to shape markets in our terms and bring competitors to compete on areas where we have the operational advantage.

There are no obvious big bang solutions to any large-scale problems – only many small steps in the right direction. Toyota’s deep lesson of improving technical processes everyday by working more mindfully and thinking more carefully about the decisions we make is, I believe, a proven way forward, if we abandon seeking full design solutions and submit to the discipline of daily kaizen to reach large-scale goals.