The Lean Post / Articles / The Second P in LPPD: Why the Future is About Lean Product and Process Development

Jim Womack, PhD, the founding CEO of the nonprofit Lean Enterprise Institute and a management thought leader, speaking at the Designing the Future summit in 2019, describes the thinking behind Lean Product and Process Development (LPPD) — and why it’s the future of lean thinking & practice.

I call this The Second P in LPPD, and I’ll make clear what that means in just a minute. Now, I do have some perspective on these things because I’m betting I am the oldest person here. Anybody here 70 or older? Well, there’s probably a couple of people who are too feeble to raise their arm. But whether I am or not, that’s what I’m thinking.

How “Lean Production” Came to Be

The term “lean production” was introduced by our MIT team in 1987. I think you all know John Krafcik, who is now the CEO of Waymo, which is the Google subsidiary that’s going to bring you autonomy or not. He had the idea, and I wrote it on the board. I remember writing “Lean” on the whiteboard at MIT because we needed a name for a phenomenon that we had documented; not just discovered but documented. We really had the evidence, and we needed to write an article, and we needed to have a name. The article was going to be called “The Triumph of the Blank Production System,” and we had to fill in the blank. 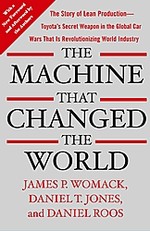 So, I got the whole team in the room and said, “Let’s lock the door over here till we get a name for this kind of thing.” The idea was that more value creates more value with less, so let’s call it lean. Then that was widely popularized in the Machine book [The Machine that Changed the World] 29 years ago. I still get a teeny bit of royalty. I always get a teeny bit of royalty but, because of the way that it was set up, everybody else got all the money. But that’s okay. I got a brand. Okay?

So, “lean production,” if you read the book — and, by the way, a million copies in 23 languages. I’ve signed a gazillion of them. I sometimes have time to ask, “What did you read in it?” And what they say is, “Well, this is a great book about manufacturing.” I say, “Really? Manufacturing?” Well, it turned out what they read — what they heard; they didn’t read — but what they heard was it was about factories.

Making products with fewer defects in order to improve good times and cost lower cost by applying lean techniques, okay? That’s what they heard. That’s what they read. But wait a minute, if you actually read the book — I know for a fact, I wrote it.

The Machine isn’t Only About Factories

But, if you actually read the book, the five chapters, equal length, one is on product development. One is on lean supplier management and how you develop and create it. [One is on] lean customer support. [One is on] something I’ll call lean fulfillment — what you might call production, but to me lean fulfillment. You got to take the order, you have to get the stuff together, you have to organize the people, you have to do whatever you have to do, and you have to get it to the people who want it. I call that fulfillment, okay? And then finally, a management system, lean management, to go with it. Now we have lean management in mind as the alternative to modern management. Think of that as Toyota versus GM. And we said in the book very clearly you need all five to have a lean enterprise. Then you put it all together.

And of course, what people heard is, “This is a book about factories.” Okay? Because the factory, the car plant — Charlie Chaplin and the assembly line — was just such a powerful metaphor, you know. It’s pattern recognition as well, it’s what our brain does: “I see the factory. I see Charlie. I see the assembly line.”

But anyway, we were being pretty bold, so I said, “I bet you can apply this to every value-creating activity at every organization, every industry in every country. You’ll do it.” So that’s what we said a long time ago. 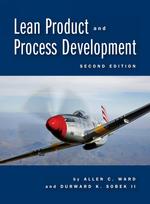 Let’s jump ahead to 2008, which was 18 years later, and we are preparing a book called Lean Product and Process Development.The author, Al Ward, is no longer with us, and so Durward Sobek and John Shook have been writing a book based on a bunch of videos and some notes by the author who is no longer with us. And I put the “Process” in that book. I was the publisher. I said, “It’s not just product development, it’s product and process development because every product must have a fulfillment process.” Right?

And what I meant — to repeat — is that yes, it’s about lean product, but it’s also about the way it’s delivered to the customer through a fulfillment process, and we ought to be talking about both at once. To this point, this community, this sub-community of the lean community — the lean product and process development community — has mostly been talking about product, right. But it creates an interesting situation that I think we’re giving away half of the business for the opportunity.

Why We Must Focus on Product and Process Development

I say about half, which is product development, but we’re not really seriously talking about process development. But anyway, that’s kind of weird. You wouldn’t think of developing a brand new product that’s just like the product you had before, but apparently, it’s not so weird to think about a brand new product that is fulfilled through a crummy, not at all lean process, but just like the process you had before. So, I’m trying to move this on, beyond this.

So, in consequence, there are two [issues]. One is that there is a loss of really important feedback between the fulfillment system, it’s called process, and the development process. Because, imagine you could fulfill this product, call it manufacturing if you like, with half the cost — half the time, half the effort, whatever. That is big feedback for a product developer. You can now afford more content for the customer. Or, if you must, you can afford to be more aggressive on price, or you can give the money to the CEO for his hobby project, or whatever. That’s probably happened to a few people. But, it’s not taking full advantage of the resources that you could use to give power to the product. And that’s a shame. So, they ought to do that.

Then the second point is that a failure to think about the process as you’re thinking about the product creates a splendid business opportunity for the lean consulting industry. Because they can come along — either in-house consultants, the CI or OpEx folks, or the external folks. Then, they immediately start doing kaizen when your new product encounters problems in fulfillment. They call it kaizen, but it’s actually rework. Kaizen is improvement to raise the standard; rework is you work at it every year, you’re down here, so you do rework to get back to here.

The Japanese have another word for it, shuzen, which is loosely — most Japanese words seem to be pretty loose; I don’t speak Japanese — but it’s kaizen that shouldn’t be necessary because you should’ve got it right the first time, okay? So don’t do any shuzen, folks. Cut that out, muda, that’s muda, and we want to get it right to begin with.

So, the consequence ordinarily, we’ll say, is the bulk of the work of the broader lean community. In my time, my 40 years has been doing kaizen on faulty fulfillment processes that should never have been launched into production. So, I think in 40 years, we can figure something out. Let’s do better. What do we do?

Well, okay. You LPPD folks must insist that new products be developed with a lean fulfillment process – that’s part of your job. Isn’t that what the chief engineer is supposed to see to? And you could insist that we do product and process development simultaneously and concurrently. You have the concurrently thing, I’ve done it, with lots of people involved on an equal basis. But right now, there are occasionally one to three folks — we might have some quality there.