The Lean Post / Articles / What’s new in your new novel “Lead With Respect”?

I see that you have a new lean management novel out called Lead With Respect. What’s new in it?

Well, the “respect” dimension of lean is hardly new. The very first paper published in English on the Toyota Production System, back in 1977 describes it as having two major features:

Although, in the continuously evolving meaning of the term “lean” (and we hope, improving), in the early days just-in-time was really put at the fore of the message, and we’ve collectively come to realize very progressively the importance of respect-for-people to lean thinking. Whereas lean was first essentially about kaizen workshops to improve flow, ten years ago we saw that to shift from one-step improvement to continuous improvement, on-going training to problem solving was also a core element of lean thinking. Yet, so far, we had not looked at lean starting with “respect” and figuring out how the rest of lean thinking looked from this point of view.

When Freddy and I started having this discussion, about five years ago, just after publication of The Lean Manager, we kept coming back to the basic fact that although Freddy tried hard to develop all of his direct reports to lean thinking, a few “got it” and many didn’t. Later on, after Freddy retired, we designed lean programs to help other companies based on his experience and we tried to improve the “got it” ratio without, I have to confess, much visible success. The conclusion always seemed to be that about 2 or 3 in 10 execs “got it,” and as a result would learn to redefine what performance meant for the group, and would be followed by another 5 or 6, who would then apply tools to catch-up, leaving an unavoidable 2 or 3 resisting new ideas to the bitter end. Overall, this delivered very visible results but had the well-known weakness of being quite fragile because the entire program would rest on the energy and wits of a small number of people.

I’m at the Gemba, Now What?

Looking at it case by case we then asked ourselves what did distinguish the leaders who “got it” from the ones who didn’t and came to realize we were asking the question of a leadership standard – was there a lean leadership behavior people could aspire to to deliver lean results? We’d been saying for years that the first step to lean thinking was to “go to the gemba and see” – but what, exactly, was a leader supposed to do once at the gemba? (We realized that many leaders shunned the Gemba because they felt uncomfortable about their role on the shop floor in front of workers’ comments and occasional demands.)

As a starting point, from Freddy’s first-hand experience as a supplier to Toyota, we started by interpreting “leadership” as a commitment to achieve objectives through the development of each individual person, as opposed to with the development of people: every leader assumes he or she develops people as a matter of course. Here, we realized that developing people was the first imperative: results were to be sought by people development first, not by command-and-control and incidentally, developing people. This led us to define the main goals of leading by going to the gemba:

In the numerous versions of the early drafts (thanks here to our editor, Tom Ehrenfeld, who kept challenging us on the topic), we realized that —

What we then needed to do was to describe more precisely what, exactly, we meant by “developing people” – and the people development underlying Toyota’s approach – thanks to Toyota Way’s Jeff Liker’s generous help we came to refine the “T-development” presented in the book: 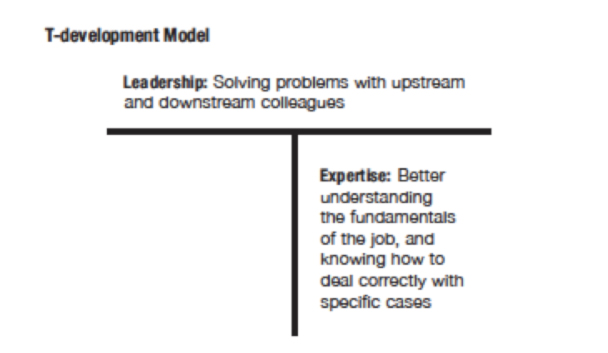 Finally, by looking back on lean leaders actual behavior on the gemba, we defined a behavioral management model based on improving both the results and the relationship which is now presented at the beginning of the book as the seven practices of Lead With Respect:

Indeed, we all know that there is not much new under the sun and that these ideas and practices have been at the core of lean practice since the very start – many of these already can be found in Taiichi Ohno’s own writings – what we hoped we have done is to focus on a “people first” look at lean and describe as precisely as we could the principles and tools of the people aspects of the lean tradition.

Is it new? Not as such as this has all been part of the TPS tradition for decades, but we believe this material has not hitherto been published in a consistent form. It’s new inasmuch as it presents what we hope is a full, self-consistent theory of HR that breaks away from both traditional Taylorist and the Human Relations schools. The principles and practices presented here are specific to lean and the underlying motivational model is a blend of modern psychology research and lean experience at the workplace – this part, for sure, is new.

In the 10 years we’ve been writing lean novels, Freddy and I have tried to present each time lean from a fresh perspective. The Gold Mine is an introduction to lean thinking and tools in a practical context, with a strong link to the business situation. The Lean Manager is a presentation of a full lean system as a complete way to run one’s business. Lead With Respect portrays on-the-job behaviors of lean leaders which can be learned through practice to fulfill the promise of lean by aligning the company’s success to individual fulfillment. A rather lofty aim, which we tried to make as lively as possible through the lives of the characters (boring text is muda!) to make it a good summer read as well!