The Lean Post / Articles / Any step forward in a lean transformation is a good step — right?

Surely a step forward in a lean transformation is a good thing, even if it’s not completely in the right direction?

Well, any step is a good step if we learn from it. Otherwise it’s just as step – and a step in the wrong direction does take you downhill. The whole point of PDCA is not just “plan” (the direction we want to go) and “do” (the step forward) but also “check” (is this going as we intended?) and  “act” (what conclusions do we draw?). Moving forward for moving’s sake is actually no step at all.

Increased output doesn’t necessarily yield outcome. This is socially difficult as people just want to move on, to do stuff, to get cracking. But the odds are that easy steps are steps along the path of least resistance (although they might not feel so easy to the person who actually gets the job done). Similarly, steps in the right direction tend to be an uphill struggle, and not so easy.

Think about quality issues. Think of any process where you are delivering late because of uncertain quality. The path of least resistance is to increase output and inspect and sort the work more thoroughly. In doing so, although your yield diminishes (proportion of good work to done work), your delivery output actually increases (less unhappy customers).  BUT, your learning opportunities and the probability of ever solving the fundamental problems recedes badly.

On the other hand, trying to identify the point of cause, the root cause and come up with a real countermeasure is hard and requires inquisitiveness and creative thinking – meanwhile, customers are not getting the jobs they asked for. This is hard. Following the first option is not necessarily incompatible with the second as long as the “check” (what happens to first-time-through?) is done properly, leading to the right “act” of distinguishing stop gap measures from policies.

The problem is tough enough with routine work, but imagine product design issues or marketing branding problems. In many situations, knowing what “the right direction is” is not obvious in the first place. How many product redesigns have we seen where the engineers are really happy with what they’ve done, but customers don’t take to it (New Coke anyone?) or rebranding gone bad (remember the Gap’s new logo until they retracted and returned to the old one?). The engineers and designers who make such costly mistakes are convinced they’re doing good (hard to judge your own lack of talent and/or inspiration) but, still …

First, stand on the shoulders of giants: Don’t go off into the blue by yourself. Choose the best competitor in your area, or the best product, or design, and emulate. This doesn’t mean copy blindly, but try to so as to understand the underlying choices. When Toyota designed its first Lexus, it wanted to achieve the drive of a BMW with the comfort of a Cadillac. So, sure, Lexus number one looked like a botched Mercedes, but it still had an astounding success because engineers put their energy in solving usage problems rather than reinventing luxury cars in the abstract. The result was a luxury brand and car that many – like African Lean Institute Founder Norman Faull, below, with his beloved Lexus – consider to be the best. 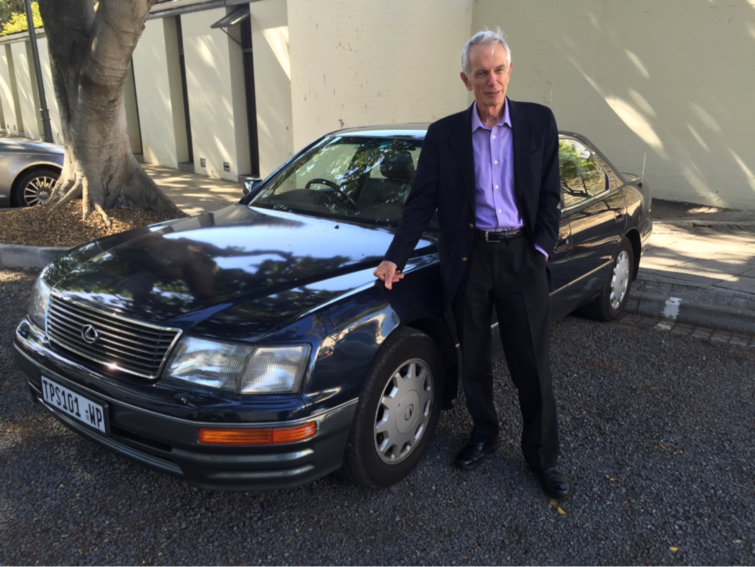 Second, iterate: Understand the flow of products you’re stepping into and have a clear vision of:

Looking at a flow of products usually means that some technical aspects can remain standard while some others need a lot of work. The main point is to be very careful with architectural changes which could radically change how customers relate with the product without the designers ever realizing it at first.

Thirdly, hansei: Accept that no mother finds her baby ugly, which is why it’s essential to think of the next step right at the end of the redesign (or simple kaizen). Thinking of the next kaizen will lead you to evaluate more clearly the one you’ve just made (yes, confirmation bias and all) and prepare you mentally to consider that maybe your great step forward wasn’t so great anyway.

There are three overarching lessons in lean thinking implicit in your question:

Yes, a step forward can be a bad thing, because it can take you a step further away from your goal. Yes, it’s easy to tell people “well done” because they have moved and you don’t want to put them down, and block their creativity – they might never try anything new again. Yes, this is a conundrum that is only solved by a rigorous culture of plan-do-check-act without which you can be performing kaizen “experiments” until the cows come home, and still drift down to exactly where you don’t want to be – with people committed to their own ideas on top of it.

Years ago, senseis used to look at kaizen efforts with a sensei-like frown and ask the hard questions:

Such questions perfectly reflect the thinking behing the Lean Transformation Framework. Never easy, but so much more deeper thinking!