At his talk at the Lean Transformation Summit earlier this year, and at conferences since then, including Industry Week and Shingo, Lantech CEO Jim Lancaster shared these words, expressing a Groundhog Day-like despair at having to solve the same problems on a daily basis (“Didn’t we do this yesterday?”). As he voiced his anguish, I looked out and saw a good 600 of the 660 listeners looking down at their feet in a shared response, his comment the awakening whap of a “Zen stick” (as Dan Prock would say) inspiring each listener to reflect, “Yes, that’s me!” and ask, “If he can break the cycle, why can’t I?”

Working with his coach Bob Morgan (a real-life version of the character in The Gold Mine), Lancaster finally found a way out of his team leader Groundhog Day by bringing a structured daily management routine into his company. He describes this learning process in his new book, The Work of Management, in which he reveals how the people of Lantech finally broke the vicious cycle of rework in favor of a virtuous “daily path to sustainable improvement.”

Lantech, along with companies like Wiremold and Genie, was one of the famous lean manufacturing success stories of the early 1990s, fame that led to books, articles, and a steady stream of visitors wishing to witness first-hand the methods that had led to the company’s acclaimed success. And, make no mistake, those successes were real. Lantech learned at the hands of the best “lean sensei” of the time, applying many of the tools of standardized work, kaizen, built-in-quality, and the rest, leading to remarkable improvements across the operational board.

But, as the company continued along its path, CEO Jim Lancaster found that the tools that the company had worked so hard to put in place weren’t enough. Something was lacking. We often call it “sustainability.”

When it comes to organizations or work of any kind, there is no steady state. But, we can, with deliberate effort, achieve levels of “stability” from which we can aspire to higher levels of performance with greater degrees of consistency. Work teams can work to maintain the standards or expected levels of performance, by intervening methodically to prevent them from, as Lancaster likes to call it, “deterioration.” This is Lantech’s lean management system, anchored by its practices of daily management for stability.

The real work of management entails routines that bring an end to the cycle of repeatedly solving the same problems over and over, enabling managers to build improvements on top of stability. In Art Smalley’s “Four Types of Problems” framework, Lantech has wrestled to the ground those nagging “something gone wrong” problems – no more Groundhog Day as a team leader solving the same problems over and over!

Like all powerful lean practices, applying this successfully requires a mindful balance of the social and technical aspects of any work system, and calls for a leader willing to revisit every belief at the core of their daily work. This book shares how one CEO was able to develop what we can call Leader Standard Work, or a management kata, or – as Lancaster refers to it – simply a standard management routine.

Lancaster makes no claims that the management system at Lantech is perfect – it’s a system that is still evolving as company managers learn, check, and adjust along the way. As such, it’s a great example for us to learn from, not merely something to copy, as we reflect on our own situations. 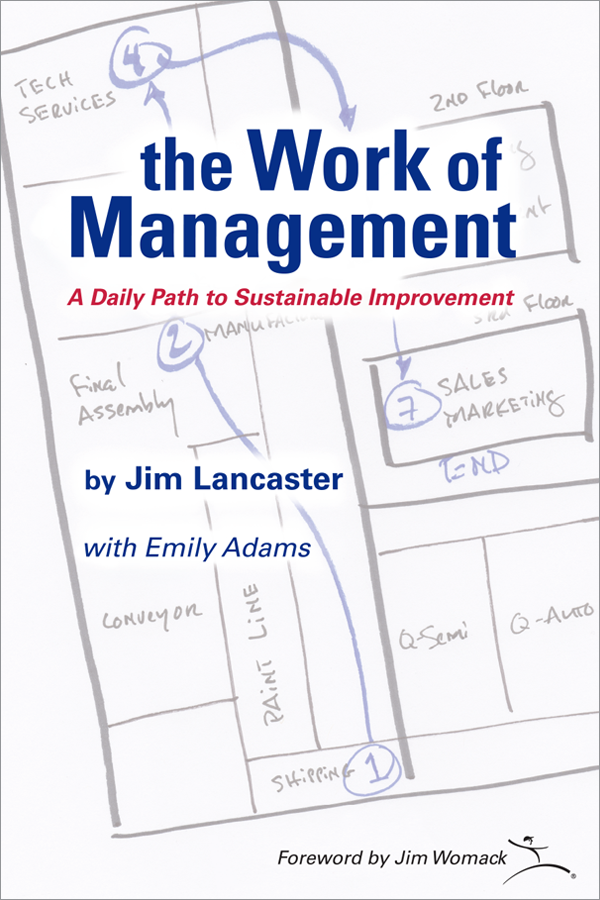 The Work of Management