The Lean Post / Articles / Does a lean transformation boost a company’s stock price?

You’ve worked with a lot of different companies in the public and private sectors. How have the stock prices of the public companies done?

Honestly, I don’t know – I don’t track this very closely. But I can tell there is a marked difference between privately owned companies and publicly traded companies. In my experience – and I have no way to know how general this is – in private companies lean is usually driven by the CEO who is also the owner, or a large shareholder, and who considers the company, well, his company and sees success in sales and profit figures. In publicly traded companies, lean is pushed by a COO who takes care of operational matters whilst the CEO is essentially focused on dealing with Wall Street where success is measured by the share price. I only know one CEO of a publicly traded company who is also a lean leader and he is simply amazing. He jokes that he works with the plants during the day and then for the Street at night. I don’t know when he sleeps – if he ever does.

As a result, there are three broad differences I can see in private versus public companies: the longevity of the lean effort, the tactical focus, and depth of lean thinking in terms of product improvement.

Public companies tend to be large industrial concerns, where executives rarely stay in a job more than three or four years before either being moved to another job within the group or on to another company altogether. The focus of a lean-oriented COO therefore tends to be a program to implement the main lean tools and gather the low hanging fruit. At large organizations this typically means a determined 5S plan (each area builds their own 5S plan and the COO follows this closely on the gemba), setting up a pull system, and a focus on customer complaints. This will double turns and improve the margin very visibly. In large organizations, this already demands a lot of hard work and clear vision, but it doesn’t fundamentally change anything about products or technical processes – it just clears away a few obvious misconceptions and management mistakes.

These kind of lean programs pay very visibly in terms of rapid improvement of numbers, but these results are also quite fragile. When the COO moves on to the next job his successor is unlikely to continue the effort (and to be fair, has a harder task because the low hanging fruit have been gathered). He or she manages the division in a mainstream way and in six months to a year, the operations have reverted to where they were before the lean initiative.

In privately owned companies, the CEO/owner tends to move into deeper competitive problems right away, but on the other hand not be so experienced at deploying the lean tools wall to wall. The lean effort is far more exploratory as the gemba walks focus more on understanding the business’ deep issues than simply apply this or that tool. Tool implementation is therefore more hodgepodge fashion, but problem finding of product and process issues starts right from the start. Surprisingly, this approach also delivers quite visible short-term results as low hanging fruit are also identified and solved, but it lacks the neatness of corporate-style tool-driven programs.

In private companies, in the first two years, two interesting things happen: first the balance of power within the company changes as the CEO starts working more closely with the managers that “get” what he’s trying to do (and some of the most resistant leave – not necessarily pushed out, but simply because they don’t want to work this way) and a few difficult product/process issues emerge, where typically the company doesn’t have the internal skills to face them (if not, it’d have done it before) which leads to investing in developing new capabilities.

Compared to the COO of a public company, the CEO of a privately owned company has both a longer tenure and a deeper interest in honing his competitive edge (as opposed to delivering low hanging fruit to the Street) so the focus is from the start far more on lean product and process development. On the other hand, smaller private companies are less used to corporate programs, so lean spreads by spill-over rather than by roll-out and looks less showy.

Nonetheless, lean gets really interesting in the third or fourth year, once the low hanging fruit has been gathered, the window is clean, and the real technical problems can now be faced. This is closer to the kind of lean we can see at Toyota with less of a focus on tools and a lot more head-scratching on understanding which product features deliver customer satisfaction (both in terms of performance and quality) and which aspects of the process make these features work or not.

The second very visible difference between public and private companies is the tactical focus of the former. The success of public companies is measured in their share price. That is quite visible from within, as managers themselves often follow the share price. I’ve even seen some companies with flatscreen monitors displaying the share price. Share price is largely the reflection of how Wall Street reacts to news about the company, such as whether it respects its forecasts or when events, good or bad, happen, often by accident. Consequently, the lean program is subjected to all the pressures of making the quarterly numbers look good. Every quarter. Typically we see:

And so on. These managerial tricks are typically driven by the finance function and the CEO and the COO can’t fight it and will have to adapt. As you can imagine, this doesn’t really help with basic stability of lean systems, but it’s hard to fight city hall on this.

Private companies don’t have to deal with these issues – other than some board member pressing for strategies to maximize share value in their eyes (I see it happen, but that’s pressure the CEO usually knows how to resist). On the other hand, the private companies I know are much smaller and usually sell to public companies, so they have to deal with the effects of these shenanigans transmitted through purchasing, procurement and investment decisions, which creates a non-stop stream of business crises for suppliers. The challenge of a lean CEO in a private company is how to turn the endless flow of nonsense decisions coming from his large customers into teachable moments to continue to bolster the lean work.

The Best of Both

Overall, the main bias I see in public companies (by all means, not always) is one towards greater managerial process control in order to make departments react to short-term pressures and, at the same time, not much of an interest in product improvement or development. Lean is used to improve the company value in:

The advantage of public companies is greater clout to get things done once it’s been decided and top management is aligned. The disadvantage is a narrow focus on spot results as opposed to outcomes. Products are often treated as commodities; R&D budgets are often cut, changes to products are imposed regardless of capability, and it’s very, very hard to argue for reinvesting cash savings in training people and hiring experts. Their kind of lean is mostly about establishing standards and making people follow these standards.

Private companies, on the other hand, tend to be led by CEOs from the business who easily see the potential of lean to strengthen relationships with customers by improving product design through technical process improvement. Lean is more about kaizen and continuously exploring and experimenting with new ways with the product in mind. On the down side, they lack the macho culture of “get it done or else” of public companies, and there is a lot of energy wasted from a lack of rigor in the use of the lean tools, and too much experimenting that is never repeated and so doesn’t lead to actual new knowledge.

I guess the ideal would be the product passion of the CEO of a private company blended with the execution discipline of the COO of a public company, but so far all I’ve seen is a space of in-betweens. I’ve ranked the programs I know firsthand with more than three years longevity on the two dimensions of “product passion” and “execution discipline” and this is what the trade-off curve looks like: 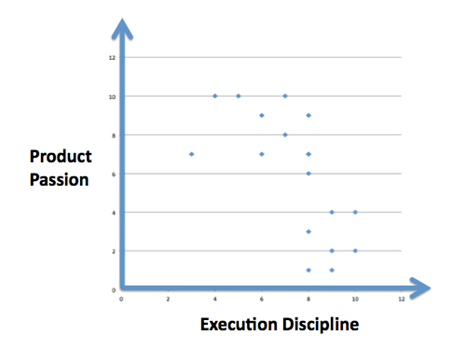 With, typically, public companies on the right hand lower quadrant and private companies on the upper left hand side. The real surprise in this graph is to find hospitals as the most balanced positioned in the middle ground.

I don’t know how to answer your question directly as I don’t track the stock of companies I know first-hand, but, thinking about it, I can personally see some systematic biases. Lean does help in both cases, supporting leaders in what they try to do and how they determine success, but in rather different ways. I don’t know how generally my personal experience applies but this is a great place to start a conversation – I’d be very curious to hear of any one else’s take on this topic?

Ask Art: What is the Best Lean Leadership Development Program?