The Lean Post / Articles / From Troubleshooting a Leaky Toilet Flapper to Innovating the Internet, a Comprehensive Problem-Solving Framework

Arriving at his hotel well after midnight, author and business consultant Art Smalley just wanted to get some sleep before his keynote presentation later that day. But Smalley, whose latest book on lean management is “Four Types of Problems,“ first had to solve a problem.

“The flush valve flapper in my hotel room toilet wasn’t sealing and the doggone water kept running,” Smalley told the audience during his keynote at the recent Northeast Lean Conference in Hartford, CT. “There was no shut-off valve, so I fiddled with the flapper trying unsuccessfully to get the water to stop. I’m tired. I can’t sleep. I’m going nuts. What do I do?”

He briefly considered calling the front desk to request that maintenance fix the toilet or that he be given a new room. Neither was a good solution because he would either have to re-pack to change rooms or wait for maintenance, costing him time and precious sleep either way.

Recognizing the running toilet as a Type 1 problem, Smalley responded by troubleshooting. “I got dental floss from my suitcase and tied up the floating ball inside the tank to fool it into thinking the tank was full,” he said. Problem solved, temporarily at least, he laughed. In the morning, he reported the problem to the front desk for proper repair.

The Problem with Problem Solving

Smalley used the anecdote to explain to the crowd that troubleshooting — what he classifies as a Type 1 problem within his 4 Types Framework, is sometimes necessary in life. Type 1 problems have a time component that requires rapid response and short-term corrective actions. A flat tire on the highway is a simple everyday instance. Another example is a fire department extinguishing a house fire before looking for the cause.

The framework helps managers and teams avoid two critical pitfalls with problem solving that are becoming more common as companies try to create continuous improvement cultures based on developing people’s problem-solving skills. Smalley has observed that they mechanically reach for the same familiar problem-solving methodology no matter what the issue is, or they drown in dozens of methodologies, uncertain which to use.

“I see companies falling into both traps, unfortunately,” he said.

Instead of dismissing troubleshooting as “band-aiding” a problem, Smalley urged lean thinkers to appreciate its inherent speed and flexibility in containing process or customer problems.

He noted that the famous Toyota andon system handles 10,000 simple calls for troubleshooting help daily. Most involve resetting infrequent fault conditions in equipment, quick coaching an employee on standardized work, or other minor adjustments that are resolved in a minute or less. The shortcoming is that troubleshooting doesn’t always get to the root cause of a problem.

Determining a root cause is the domain of Type 2 or gap-from-standard problem solving, typically through a structured process such as A3 reports or other problem- solving routines like 8D or six sigma.

“The key here is that people recognize there’s a gap from a standard in the problem definition,” Smalley explained. “The problem can’t be ignored but it can’t be solved by troubleshooting; something deeper and more deliberative must occur.” Type 2 uses convergent thinking and critical thinking to identify cause-and-effect relationships. He organizes the root-cause analysis approaches into three groupings of logic families: qualitative (5 Why, fish bone diagramming, etc.), one variable at a time (control charts, etc.), or multiple variables at a time (design of experiments, etc.).

No Problem? Create One

In contrast, Type 3 problem solving raises standards or conditions to a new, higher level. It’s popularly known as continuous improvement or by the Japanese term kaizen. The organization is, in effect, creating a problem where none existed to create a new standard.

“In this third type, technically we are at a very stable and consistent level of operation so there is no problem, per se,” Smalley said. He gave the example of a company that is shipping 100% on-time. There isn’t a problem, but it can still shorten lead-time through the system to the customer.

Type 3 also is called target-state problem solving or “created gap” at Toyota, noted Smalley, who was one of the first Americans to work for Toyota in Japan, learning the principles of its vaunted Toyota Production System (TPS) and problem-solving methods at the Kamigo engine plant, where TPS architect Taiichi Ohno was the founding plant manager.

Type 3 requires more divergent thinking and creativity compared to the first two types. Toyota used the phrase “creativity over capital” to stress this approach is about methods, not new equipment, Smalley noted.

Type 4 problem solving “is bigger, more open-ended, and future-state oriented than the others,” he explained. It’s commonly called innovation, clean-slate, or open-ended problem solving, spanning a longer time frame and involving bigger changes to products, processes, or systems. Breakthroughs such as penicillin, radar, or the internet are examples of Type 4.

In order to fully utilize resources and show respect for people, Smalley recommended using all four types of problem solving, not just one. In baseball, he pointed out that home runs are nice, but you can also score a lot of runs with walks, singles, doubles, and triples.

“Types 1, 2, and 3 keep a company in the game to survive, but if you don’t have a Type 4 ability to deliver new products, processes, and growth, the company may not survive, he said.” 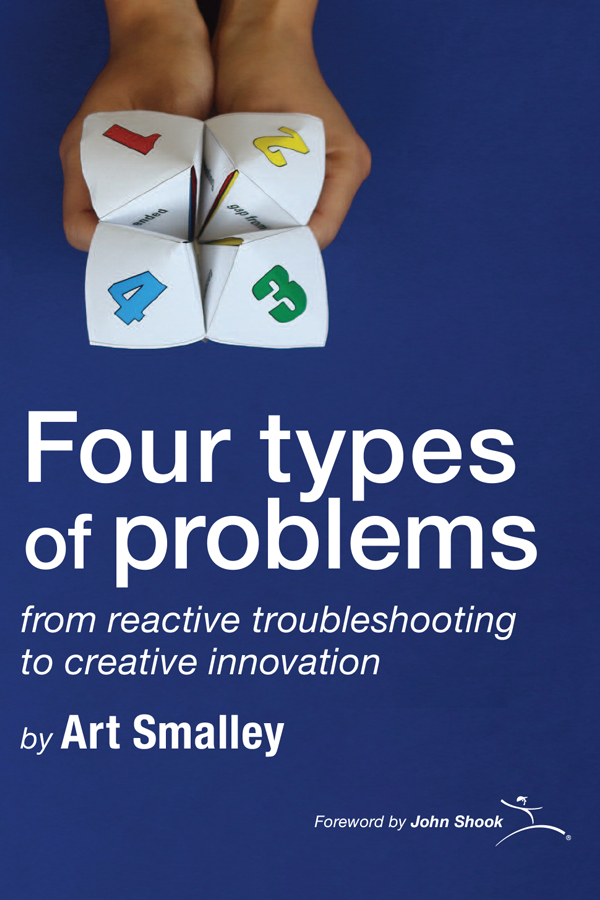