The Lean Post / Articles / It’s the Productivity, Not the People

I thought I had missed the boat, so to speak, by not going fishing in Alaska after college. I had always wanted to give it a try, but it is a young man’s game and I had been a lean practitioner in both production and healthcare for nearly a decade. When I finally got my chance to fish, to my surprise, the experience resulted in me getting referred to a Bering Sea fishing company that had been plagued with poor production since converting from pollock fishing to trawling nearly five years earlier.

After getting over my seasickness and getting up to speed on my “other duties as assigned,” I was presented with a great opportunity to work with a newly promoted factory supervisor, a first mate who would eventually become the leading lean thinker on board, and a captain who supported increased involvement of the vessel leadership in the factory. Since many of the crewmembers were skeptical about our approach and had previously worked on a poorly run Japanese fishing vessel, we were careful not to use the words “lean” or “Toyota.” 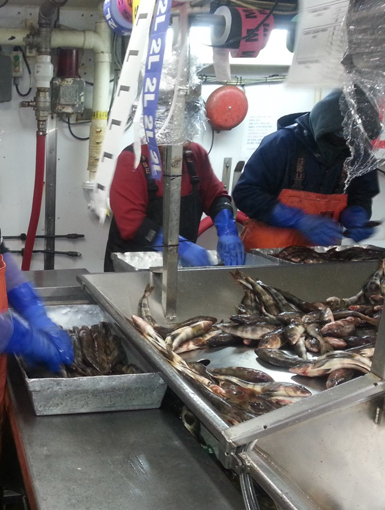 To paint a simplified picture of the production process: a net with 30 to 40 tons of fish is hauled onto the deck and funneled down into the “live tank” at the start of the factory. Various stations sort the catch by species and size, remove the heads and guts, and arrange 20 kilograms of product in metal pans. The pans are then frozen over the course of several hours before being packaged and stored in the hold. Once 600 tons of finished product are on board, it is time to offload at Dutch Harbor and return to sea.

The factory supervisors had been complaining that the machines were too old, the number of crew insufficient, and the size of the fish too small to meet the 90 tons of finished product per day production target. One of the first questions we asked the new supervisor was “How do you know how many people you need?” After discovering that the number of people needed was calculated based on very old projections, we conducted time studies to see whether these projections had proven accurate.

Even prior to initiating focused improvement efforts, the act of conducting the time studies helped the supervisors learn how to level their production flow. Have you ever watched 5 year-olds play soccer, where the entire group chases the ball and the positions might as well not even be assigned? It is surprising how often factories are run in a similar fashion! This factory was no exception. Most of the crew would run the Head and Gut, or H&G, machines until a massive pile of work built up at “panning,” the next step in the process. Every ten or fifteen minutes, the “H&G” machines were shut down while the crew migrated to the panning stations. Ten or fifteen minutes later, they migrated back.

The supervisors realized that with the staff shuttling between stations four times an hour, it was difficult for them to determine the pace each station needed to run in order to meet demand (we did not call it “takt time”). They also calculated that each migration took about a minute, which led us to ask how much production would be gained simply by placing the correct number of people at the correct work stations. After recovering from the shock that the practice allowed the 24-hours-a-day operation to lose approximately an hour and a half of production, using the cycle time calculations, they placed the number of people needed at each step in the process to meet takt and virtually eliminated the need to “move people to the work.”

There was another interesting benefit after factory leadership learned how to calculate takt and cycle times: it was the first time in five years they informed the head office in Seattle they had enough people! Furthermore, in addition to gaining an hour and a half of production by placing workers in the right locations, the oldest, most problematic H&G machine was now rarely used, and the less optimal overflow panning stations were similarly avoided. The result? Unexpected efficiency gains, all before we had begun engaging in systematic improvement efforts.

How does this slow introduction of lean tools compare to some of your journeys? Have you had more success with big kickoffs? I am interested to hear how others found success in introducing TPS into a culture after being told “It won’t work here.”

Since being introduced to lean over a decade ago, Craig Stritar has been working in industries ranging from healthcare to production and distribution; at one point even leaving the safety of land to introduce “lean at sea” on an Alaskan factory trawler. Like many other practitioners, for the past several years, Craig has focused almost exclusively on organizational cultural transformation through daily learning cycles (Toyota Kata and TWI). He is presently the Director of Operations Improvement at Meritus Health in western Maryland.