Peter is a 63 year-old man who operates the punch press at his company. At the end of the day, he drags a 50-pound garbage can through the building and out to the dumpster, a distance of about 75 yards.

His colleague, José, is about twenty years younger. Peter and José have been working together for years. Whenever possible, José tries to take out the trash because he doesn’t want Peter to hurt his back—but work being what it is, that doesn’t always happen. 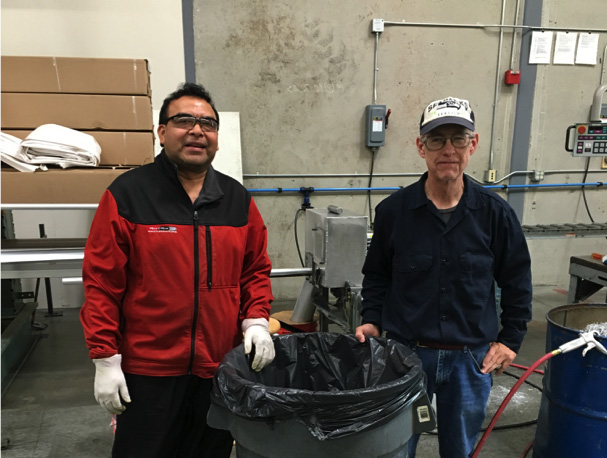 I’m shepherding this company along its lean journey, and we’ve started by asking people to simply fix what bugs them. We’re not making people sit through lots of classes, we’re not doing 5S, we’re not trying to “move the needle” on the business—we’re just trying to get people to see that the way things were yesterday isn’t the way they have to be today. We want people to know that they have the power to make things better and easier for themselves. We often forget that’s the real first step in establishing a culture of kaizen—just knowing that you’re allowed to improve things.

Peter and José are men of few words. Neither said a word during the kickoff meeting, nor at any of the training sessions. I figured that they were resistant to change, or that all those years of punching the clock sapped them of any desire to do anything other than the bare requirements of their jobs. I assumed that they weren’t going to be active participants in the lean transformation.

So I was surprised when I saw an idea card on the improvement board from José. He wanted to put wheels on the garbage can in the machine shop. When I asked José about his suggestion, he said simply, “I’m worried about Peter. He’s 63, and I don’t want him to hurt his back dragging the trash to the dumpster.”

Lean leaders, and lean consultants (like me), often talk about the organizational benefits of kaizen: lower costs, bigger profits, shorter lead times, higher quality, etc. But the truth is, those benefits are pretty far removed from the daily lives—and wallets—of the people working in the company. What we don’t talk about quite as much is the human reason that kaizen is important. When we do kaizen, we make work easier for ourselves and for others. We use our creativity to help others. And as social creatures, that’s a lot more salient and inspiring than an increase in the company’s earnings per share. There’s a reason that Shigeo Shingo said that the four goals of improvement—easier, better, faster, cheaper—are listed in the order of priority.

The wheels that José put on the garbage can will have absolutely zero effect on the company’s financial performance. But it’s a first step on the road towards building a culture of kaizen. And even more importantly, it’s a way of showing that he cares.

Earlier in his career, Daniel Markovitz held management positions in product marketing at MarkBuilt Construction, Sierra Designs, Adidas, CNET and Asics Tiger. He also has experience as an entrepreneur, having founded his own skateboarding footwear company. He left the business when he realized that he’d need tattoos and body pierces in really painful locations to fit into the industry. Dan helps individuals and teams improve performance by applying lean concepts to knowledge work through his company TimeBack Management. His new book, A Factory of One, was published by Productivity Press in December 2011. Dan has also published articles in the Harvard Business Review blog, Quality Progress, Industry Week magazine, Reliable Plant magazine, and Management Services Journal, among other magazines. He is a faculty member at the Lean Enterprise Institute and teaches frequently at the Stanford University Continuing Studies Program. He also leads a class on A3 thinking at the Ohio State University’s Fisher School of Business. Dan holds a BA from Wesleyan University and an MBA from the Stanford University Graduate School of Business.