2008 marks the 100th anniversary of the introduction of the Model T Ford. This truly is “the machine that changed the world”, even if the title of a 1990 book might suggest otherwise! Nearly 16 million copies were built over 19 years of production as the world was motorized.

The Model T in many ways marks the beginning of the lean era. So I recently decided I should go to Detroit and learn to drive a Model T. I was pretty sure that I could do it – my father learned to drive on a Model T in 1918 when he was only ten years old. But I’m still thankful to Don LaCombe and all of the folks at The Henry Ford Museum and Greenfield Village — which maintains a small fleet of Model T’s — for taking on my education. With their help I think I passed. 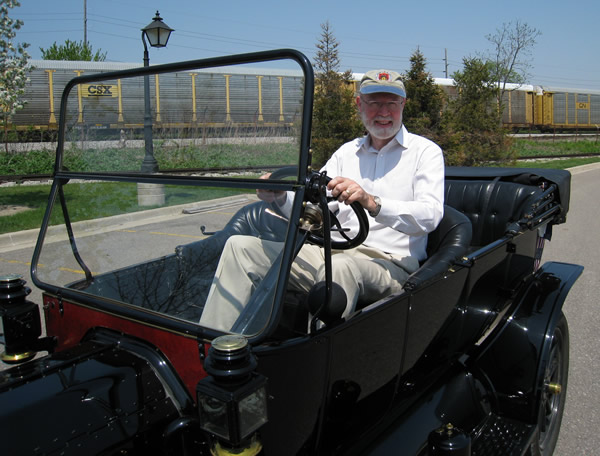 Let me say right away that it’s a nice car: High and roomy like an SUV, great off-road performance in the mud, 20 miles per gallon on 60 octane gas (which would be a lot cheaper if you could find any today), great visibility (although windows and a top would be nice on some days), and easy to drive after only one lesson. (Starting the motor by turning the crank proved to be another matter.) The Model T was an extraordinarily sophisticated technical achievement in 1908 and I often say – to the irritation of my friends in Detroit – that there hasn’t been a truly new idea in the auto industry since Ford’s car introduced reliable personal transportation for everyone at an affordable price.

What is significant for lean thinkers is that many of the product development methods we still struggle to implement today were pioneered by Henry Ford and his engineers as they designed the Model T in 1908. In particular, a design team huddled in one room with the Chief Engineer (a real obeya room!), working to a tight timetable (three months!), to design a highly modular vehicle that was easy to assemble, and one with easy access to every part for maintenance.

Equally important, many of the methods employed in lean production were pioneered between the launch of the Model T in 1908 and the completion of Ford’s Highland Park factory in Detroit in 1914. Ford’s team achieved consistently interchangeable parts (for the first time in volume production), single-piece flow in fabrication by locating many technologies in process sequence, standard work and precisely repeatable cycle times, a primitive pull system for parts supply, and a remarkably horizontal, value-stream focus for the entire production process that minimized total lead time. The innovation most visible to the public – the moving final assembly line – was actually introduced last – in the fall of 1913 – and was only possible because of the previously pioneered innovations. Thus the Model T helped start us all on a long, lean journey.

But why has the journey been so long? How can it take a century to universally embrace some very simple concepts? Why has Ford’s own company struggled to apply the full logic of the ideas first approximated in 1908? And how can we go faster?

I’ve been thinking about these questions for a long time and I don’t have all the answers. But I do have a few observations:

Determine the right destination before you start the journey: As the length of the journey to a completed lean enterprise sinks in, I often hear the expression “it’s the journey, not the destination.” And it makes me grumpy every time I hear it. If we really have no expectation on our watch of creating mature lean enterprise, but instead just want the pleasure of applying lean techniques to random processes, then let’s take the next exit and do something else.

In fact the reason the journey takes so long for many organizations is that they have no clear agreement on just what the right destination is. And in particular they make no connection between meeting the business needs of the organization – the true purpose of any process improvement — and the right sequence of steps to take.

For example, I recently attended the beginning of a kaizen week in a large corporation. I played the role of an anthropologist by watching quietly from the rear. A team of earnest process improvers dove into applying a whole portfolio of lean tools to a process without any discussion of the needed payoff for the customer or the business. I don’t doubt that they will be on their journey for a long time!

The key trick, as I now understand, is to pick an initial destination — an improvement in the performance of key processes that will permit the organization to prosper by addressing the customer’s needs. Once that destination is reached, it’s time pick another, further along the path toward perfection, that materially benefits the organization. And so on.

This also suggests something about the very nature of “perfection”: Since the purpose of any process keeps changing as customer and organizational needs keep changing, perfection is a moving rather than a stationary target.

Management is more important than tools: Ford pioneered a concept for low-cost personal mobility and a series of lean design and production tools to make this concept practical. His problem was that he never created a management system that could sustain his methods. After his departure, a formal manage-by-results system was installed to replace the informal management-by-process approach of Ford’s early days. And the company is only now returning to its roots, trying again to embrace process-focused management.

I see the same pattern in many organizations today. Lot’s of good lean techniques tied to a mass-production management system, without any awareness that you can’t have sustainable lean processes without lean management.

Good things do take time: When I first started visiting companies trying to make a lean leap in the 1980s, it seemed obvious to me that a transformation could be completed very quickly. In retrospect, what’s more obvious is that I could reach this breezy conclusion because I wasn’t the one on the gemba doing the heavy lifting! I now understand that my happy estimate that a lean transformation could be completed in five years was far from the mark. The challenge is to make steady progress with clear interim objectives (successive destinations) that actually can be achieved, building momentum for further progress. Thus a better mantra is “it is the journey, but to the right destinations.”

We really are making progress: I’m now old enough and have been observing the progress of lean thinking long enough that patterns are clear to me that many younger travelers with less experience may miss.

For example, I became interested in the Danaher Corporation as that firm started to embrace lean thinking twenty years ago. The path hasn’t been along a straight line during this entire period and observers of single points in time might easily have drawn the wrong conclusion. But the company has made continuing progress, driven by a very rigorous policy deployment process to decide on solid business grounds what the next destination should be. It is not coincidental that Danaher has been the most consistently successful American industrial company of the past 30 years.

To take another example, I recently visited the Boeing Commercial Airplane Company to check up on the progress of lean production for the 737 series, a family of airplanes assembled in the same room in Renton, Washington, for the past 41 years. When I first visited this room in the early 1990s, the airplanes were assembled at stationary positions, parts shortages were the norm, and the total assembly time was more than 30 days. Now a moving assembly line takes planes from start to finish in only 8 days. That’s continuing progress — despite several severe downdrafts along the route — that provides great hope for the future.

Thus I see a pattern of organizations initially dabbling with lean tools – probably in the form of a “program”. They gain some results, followed by backsliding, followed by a realization that management comes first and tools come second. This leads to a new round of progress and arrival at an interim destination. Then a new management team picks up the challenge, perhaps after a pause or even a relapse, and the organization sets off toward the next destination. It’s not pretty to watch and it’s not “efficient” in terms of making the most progress in the least amount of time. But it is progress. So let’s say a word of thanks to the humble Model T, on its centennial, for helping start us up this path.

P.S. For anyone with an interest in the Model T and its contribution to civilization, let me recommend The Model T: A Centennial History by Robert Casey, the Transportation Curator at the Henry Ford Museum in Dearborn, Michigan. The book comprehensively describes the car, its design process, its production system, and its social consequences. It will be published by the Johns Hopkins University Press on June 13.

Widely considered the father of the lean movement, Womack has been talking and publishing about creating value through continuous innovation around deep customer understanding for many years. In the late eighties, he and Dan Jones led MIT’s International Motor Vehicle Research Program (IMVP), which introduced the term “lean” to describe…