With the current economic turmoil impacting companies of every size, organizations must begin to change how they conduct business and even reconsider what products and services they deliver. Business leaders will need to adjust not only what their companies make but also many other fundamental strategies like:

Now more than ever, we need a mechanism, a management system that allows the organization to quickly and effectively adjust its priorities while engaging the team. As we all sit isolated, it is a time to make sure people feel respected and engaged in the business and to draw their insights forward.

My experience tells me that hoshin kanri can be that mechanism.

Those of us who were in the workforce in 2008 worried what would happen to the world when the financial system collapsed. Yes, 2020 seems like a bigger problem, for sure.

I worked at Toyota North America at the time, and we were ready. We had built stronger teamwork and alignment across our operations through several “cycles,” significantly strengthening our hoshin kanri process. Our improvement didn’t mean things went smoothly. Toyota experienced three significant challenges in quick succession: the Great Recession (2008), a quality crisis (2009), and the Sendai tsunami in Japan (2011) that fractured our supply chain.

Throughout those upheavals, Toyota North America doubled down on its strong system of hoshin kanri. When our 2009-10 hoshin focused on Quality and Safety, it sent a clear message to everyone in the company. Toyota worked to regain customers’ trust by increasing its focus on quality. To many, Toyota’s quality crisis seems like a distant memory because it recovered so quickly. Toyota also refocused on supporting its Team Members through the crises. We felt reassured that the company was committed to us because its hoshin emphasized Safety, everyone’s top objective — plus the company didn’t lay anyone off.

Additionally, the consistent use of the hoshin kanri system served Toyota sales well through those potentially devastating events. Toyota sales from 2009 to 2011, immediately after the recession and during the quality crisis and tsunami, dipped only slightly. By 2012, sales reached higher levels, according to research published by the Center for Automotive Research (CAR).

Toyota’s ability to pivot effectively in 2008-09 can be credited to its system-wide adoption of hoshin kanri across North American Manufacturing (NAM) operations starting in 2001. That year, Toyota North America’s challenges resulted from sudden growth that was not supported by an organizational structure that was aligned to a common set of goals. Let me share a bit about this story that I was fortunate to be a part of.

I spent 23 years (1988 to 2011) working in Toyota, both in Japan and the U.S. For seven of those years from 2001 to 2008, I worked at Toyota’s North American Operations Headquarters as the Assistant General Manager of Corporate Strategy. From about 1998 and through 2008, Toyota experienced unprecedented growth:

This growth also required the addition of nearly 20,000 new associates who had to learn and work according to the Toyota Way.

All this success came a bit of a price for Toyota. Toyota had established its North American manufacturing headquarters (Toyota Manufacturing North America or TMMNA) in 1996 to consolidate functions such as Purchasing and Production Engineering. However, it had kept its legacy decision-making structure — where plants reported to their mother plants in Japan. This setup robbed Toyota’s new headquarters of much of its decision-making authority and created an unnecessary sense of rivalry between and stifled teamwork among production plants in North America. Also, because North American leaders weren’t accustomed to being in charge, the plants didn’t look to leadership from TMMNA; they turned to their mother plants in Japan. Additionally, sometimes leaders in Japan did the wrong thing by stepping in and usurping authority from those in TMMNA, which resulted in duplicated effort and undue bureaucracy. 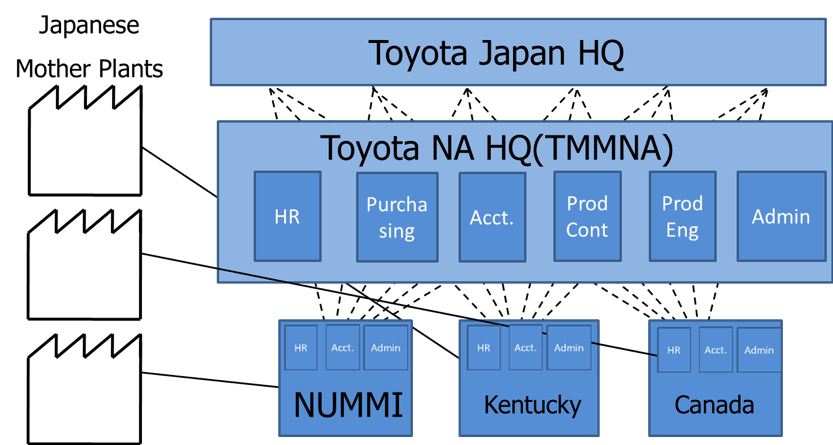 People often look at Toyota as this perfect company, but the situation I stepped into in 2001 when I entered Corporate Strategy was less than ideal.

Fortunately, I had some strong leaders around me like Mr. Niimi, who was CEO, and Mr. Miyauchi, who was head of Corporate Strategy. We all realized that what was truly needed was to fully embrace hoshin kanri as a tool to align our production leadership as a team and build our capability to adjust to this new reality of unprecedented growth.

Toyota is a company that believes innovation is born from need.Taiichi Ohno, the father of the Toyota Production System, says. “I strongly believe that ‘necessity is the mother of invention.’ Even today, improvements at Toyota are made based on need. The key to progress in production improvement, I feel, is letting the plant people feel the need.”

How Hoshin Kanri Helped Us “Feel the Need” for Change

Toyota didn’t invent hoshin kanri; it came out of the quality movement in the 1960s. In 2001, Toyota fully utilized hoshin kanri in Japan but was still learning how to use it in its overseas operations. Our challenge was to figure out how the system could help us transform our business quickly from one of a “subsidiary” function, reporting to our Japanese headquarters, into one of a self-reliant, team-oriented organization that operated more independently from Japan but as a single unit in North America. 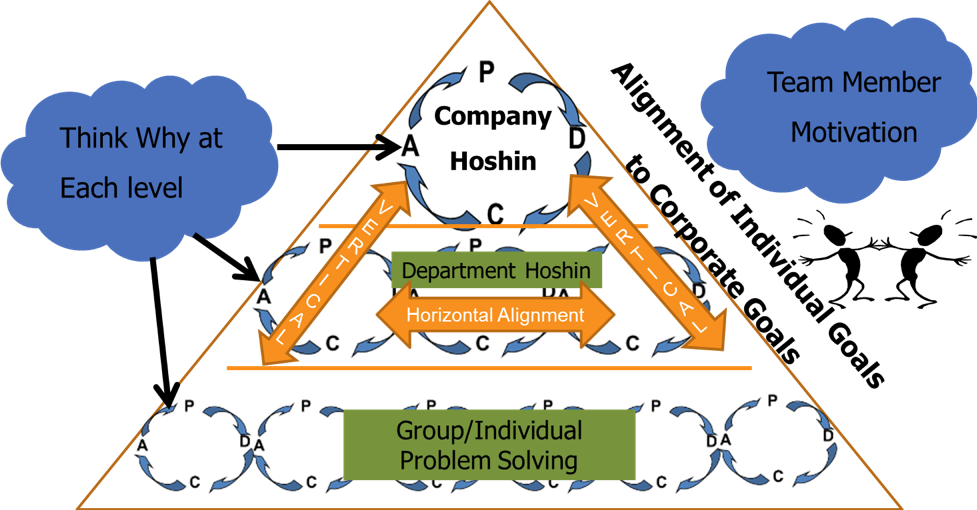 Hoshin kanri is a systemic approach for defining a strategy and, more importantly, a management system that engages all people to support that strategy while building horizontal and vertical alignment. This illustration represents the hoshin kanri framework similar to one we used at Toyota North America, showing our purpose to:

James Womack wrote an excellent Lean Post called The Cascade of Hoshin that speaks to this topic well.

As the first step in building alignment and teamwork, we brought together our North American executive team to establish a 2010 North American Manufacturing (NAM) vision based on Toyota’s global vision. It looked like this: 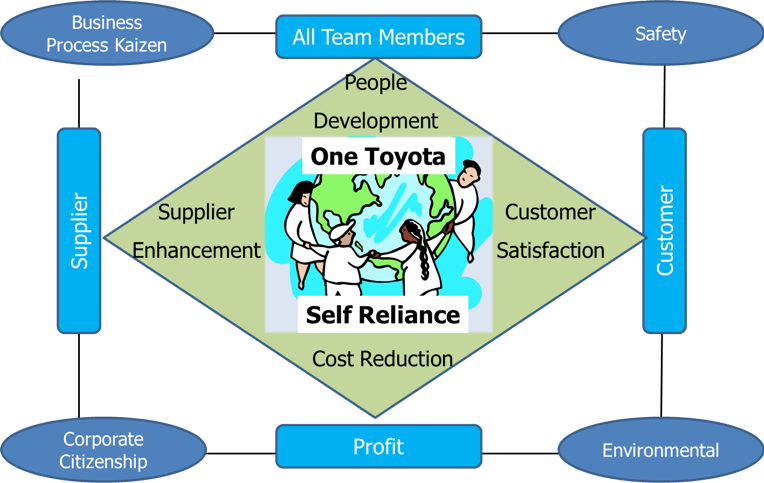 Finally, we built a rigorous management system that:

Not What We Did But How We Did It

We accomplished all this in about six months, thanks to a new, self-reliant management system that created a PDCA structure within Toyota North American manufacturing. This new structure set the stage for several other critical changes we made over the next several years:

Not everything changed in six months. But the structure we put in place in the first six months and executed on from 2003 to 2007 helped us weather the upcoming storms.

How Can Hoshin Kanri Help You?

Depending on your location and industry, you are experiencing the Covid-19 pandemic in different ways. You may be busier than ever, or you may be figuring out how to help your business survive.

Based on my experience, hoshin kanri can help you greatly. So, what do you do?

Join us for a live online course to sharpen your leadership skills and discover a proven method for successfully executing your strategy.