How many times have you sat in a meeting to discuss solving a pressing, urgent or serious problem – and yet a full hour later found that you’d gotten nowhere? Or worse, you find yourself in an even bigger hole than you started with? Not to mention feeling more frustrated leaving the meeting than you did entering it.

Does that sound familiar? Ouch.

I have seen this many, many times during my career, to the point where it almost became a norm. But ultimately I was able to reach a point at which I instinctively got into the habit, condition, and behavior of always using a proven tool and technique to align the team – and from there strive towards forging an incremental plan to solve and address the problem at hand. That tool I found success in was none other than the humble A3.

My team at the time needed to transition from a ‘talking shop’ (“Why not?” “Why can’t we…?”) meeting culture to a ‘can-do’ breakthrough-mentality meeting culture. I wanted to be able to organize the meeting teams around A3s and drive the input to discuss and populate facts, verify data, investigate and pursue actions with meaning following some healthy debate.

So for each meeting I would bring a blank A3, a sharp pencil and an eraser. I worked with my team to frame the problem, identify causes, test hypotheses and work towards a solution incrementally, often not knowing or seeing the end state – only the next logical step. Taking no more than an hour per meeting session with the entire group to work towards the immediate next step each week, it became my the focus to drive this cadence.

People’s span of attention can often be short and unorganized, so I find that fixed, repetitive sessions with a consistent format help you to get people aligned, committed and focused on working the problem through to the end. They’ll know what to expect and see each week and eventually come to realize they are part of the team solving this problem, and that their solutions and input hold value.

This might sound too simple, but it’s about being tenacious enough to do it consistently, without being derailed. Split your hour into incremental elements as detailed and described in my ‘simple’ sketch and accompanying animation outlining this A3 meeting process. Be strict on time and don’t overrun (you could burn folks out as these sessions can be quite intense), but hold the team accountable to deliver their weekly actions and be concise about what you include on the paper. You never want to bog down your management by putting micro-content in each box. You, as the owner of the A3, can speak to the small details – you need management to support your proposed solution now and a concise A3 will tell them your team’s compelling story. 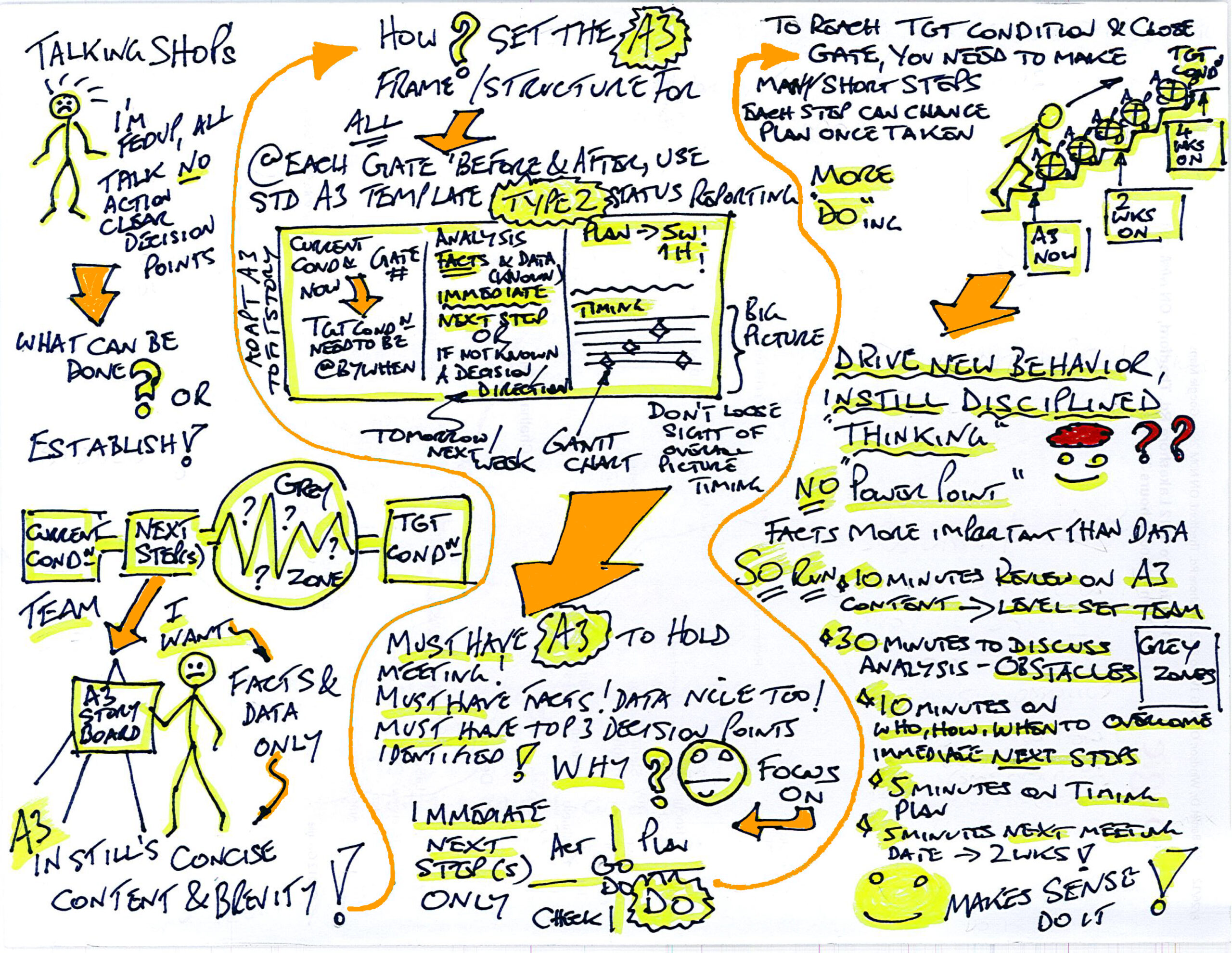 Born and raised in the United Kingdom, Andrew Quibell entered the automotive industry in the mid 1980’s as a trainee quality engineer. He advanced through the ranks into quality management and worked in several established tier-1 companies in the UK before joining the Textron division Kautex in 2002. Quibell entered Textron’s Lean Black Belt program in 2006, eventually becoming a leading lean practitioner in the business, working primarily in high volume manufacturing. His roles at Kautex included VP CI Global and Director, Quality – Global.

Prior to leaving the automotive sector, Quibell sat on Textron’s Quality & Continuous Improvement Council while also working as a regional advisor within Toyota’s tier-1 supplier base organization BAMA. Currently Quibell holds status as a Chartered Member of the UK CQI, a Senior Member of the ASQ, an Incorporated Engineer within ICME, and is registered as a principal auditor in QMS with IRCA.

In January 2016 Quibell left Kautex and moved into the printing industry, joining CIMPRESS – a leader in mass customization of printed products – as their Global Head of Quality Assurance.  Presently Andrew lives with his wife and daughter in the Windsor / Greater Detroit area.