The Lean Post / Articles / Tee Up Your Continuous Improvement

ProMed Molded Products began its lean journey seven years ago and have since had great success on all key metrics. Using lean thinking, our revenue per employee increased by 250%, velocity went from weeks to days, on time delivery rose from 80% to 99%, and our customer acceptance rate went from 92% to over 99%.

Despite these early improvements, however, we noticed there was still a lack of complete unity within the organization. So we were on the lookout for new ways to re-energize the lean learning process for people and make further inroads into parts of the organization where prior success was limited. We figured, while we’re at it, why not have some fun doing it? Through a networking opportunity in early 2012, ProMed observed a company using a game concept for driving lean initiatives. Soon thereafter, in August 2012, we modified this concept and introduced ProMed’s “Continuous Improvement (CI) Game”. Here’s how it works:

ProMed’s lean game is based on golf, and everyone in the company is assigned to a team. Each team creates a team identity (Ex. Caddy Shack, Wabashers) and picks a team facilitator. Each team has their personalized CI board, which makes all of their work visual in addition to making it easy to see where team activity is for each month. At the end of each month, we have a brief company meeting to acknowledge all teams on their success for the month and provide special recognition to teams achieving a hole-in-one (best possible score in golf). Champions of the month spin a wheel to see which reward the team receives, which includes things like a barbecue lunch or even a small cash payout. The energy at these monthly meetings was incredible.

Still, reactions were mixed. The comments ranged from “Isn’t this everyone’s job anyway?” to “This is the dumbest idea I’ve ever heard,” to “When is our next team meeting?!” and everything in between.

With persistence, attitudes quickly changed though and even the biggest critics started to have fun. Then the improvement ideas started to roll in. “I’ve been involved with lean process improvements for a very long time, but I’ve never seen anything so quickly and completely embraced by the entire organization,” said one top executive. “At least once a week we hear statements like ‘I wouldn’t have gotten that done if our team didn’t need another CI to get a hole-in-one’ or ‘I finished that because my CI card was displayed on our team board.'”

The Results of ProMed’s Lean Game

What has this game meant to ProMed since its inception? In 11 months we have completed 839 CI’s, averaging 77 per month. With the completion of our 11th hole in June 2013, we’ve recorded 52 holes-in-one, which is 43% of the completed holes achieved the best possible score.

And, last but not least, an unexpected benefit of the game and game boards is one noticed by our customers, potential customers, and even our auditors. The discussion of the game and the visual evidence of its success during our tours have been viewed so positively and sparks many good discussions. One auditor commented, “This is a great representation of your organization’s commitment to continuous improvement, which is actually something I am looking for during an audit.”

We all live in a “cost/benefit” world so to summarize ProMed’s results for the past 11 months: 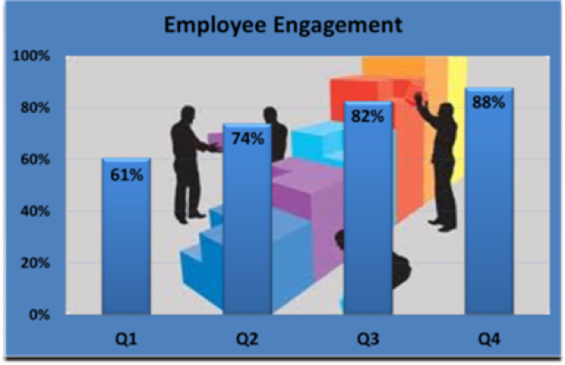 Within an FDA regulated industry, like medical device and pharmaceutical manufacturing, it can be difficult to make changes quickly, which may discourage some companies from adopting this game concept, but it’s worth trying and seeing what you find. “We are not able to make significant changes without customer approval, but we are able to change many of the non-product related aspects of what we do, which have resulted in significant cost savings for ProMed and for our customers,” Bryan Zart, Director of Operations stated.

ProMed is proof that continuous improvement can happen in a heavily regulated arena. We’ve found that proper planning and education are critical to the success of any lean program.

Bob Buckley, Vice President of Manufacturing with the San Antonio Lighthouse for the Blind, recently visited ProMed to see our game in action. He was so impressed with what he saw that he says he will take it back with him to increase employee involvement and reduce costs. The San Antonio Lighthouse for the Blind is a private, non-profit organization, serving people who are blind or visually impaired. Buckley said, “This is precisely the tactical edge that I’ve been looking for to harness the aggregate thought power of the Lighthouse Team. I suspect the savings will come naturally, but my initial excitement is the fun the team will have engaging this process.” He’s most excited about improving employee morale.

What’s next for ProMed? Our teams have met and have come up with a concept for their next CI game, with the goal of continuing to keep the entire organization engaged to its maximum level. One of the most exciting things about this game concept is that it offers American companies an opportunity to regain our competitive advantage. We all know that when we put our multi-cultural, collective heads together we are unbeatable, and ProMed is looking forward to sharing this with our fellow manufacturers.