The Lean Post / Articles / The Lean Management System: The Key to Sustainability and CI. An Interview with Joe Murli

How would you describe the Lean Management System (LMS)?

We call it the LMS for a couple of reasons, the primary reason being that over time in our experience and research, we realized that there needs to be six elements in place in order to create an organization that can not only sustain the improvements from their lean transformation but continuously improve as well. The core of lean is about small teams of people throughout the entire organization coming together each day and trying to figure out, “How can we do today better than yesterday?” And we realized that in order for that ecosystem to work, we need to have in place:

So the synergy amongst those six elements is what creates a lean ecosystem.

How did the LMS first come into being? Was it originally a product of the Murli Group?

Actually it starts with the work David Mann did at Steelcase. He was facing the same experiences there as I was at Pratt & Whitney and was the first to write about the management system surrounding lean. We both agree that our teachers at the time, while great at process improvement, didn’t teach the management system surrounding that improvement. The problem David was solving was sustainability. Beyond that I became intrigued over how to create a culture of broad-based collaborative continual improvement. I remember working at United Technologies in the 1980s, where we were persistently conducting large-scale and expensive kaizen events and then finding out that over a short period of time the teams just relapsed right back into their old ways. To say the least it was discouraging. What we have now is a culmination of research that I personally conducted starting way back in 1990, plus the collective experience of our entire team as we refined our approach over the years. I had the opportunity when establishing a joint venture business in Chengdu, China to start from scratch in a greenfield operation and put some of these ideas into practice. That’s how the Lean Management System started up – as a response to a question regarding what it would take to not just sustain but continually improve lean gains.

Hmm, six elements. Do you ever see organizations stop after achieving just a few of those elements and think they’ve done enough?

Oh yes. I mean, each of the elements will provide some benefits on their own. However, unless you have all six elements in place you will not ever achieve a culture of sustainability and continuous improvement. You might have “bursts” of it, especially in certain departments that are led by early lean adopters, but if you want truly pervasive and continuous improvements in all corners of your operation, you need to have all six pieces in place.

What part of the LMS do you find people are most intrigued by?

The People Value Stream, which is part of the people systems element of the LMS. It’s an element of changing people’s behaviors that few people in the lean community have ever thought about before. Leaders will build and coach and gain problem-solving muscle, but if they don’t consider the People Value Stream and don’t think about how they hire, reward, recognize, train, onboard, organize, and design systems around these people, you will not have team-based problem solving in your organization, but a bunch of individual contributors instead. You can tell your workers you want team-based, collaborative problem-solving, but with individual contributors you will end up rewarding firefighters and eventually that culture will win out.

Can you give an example of a company that has successfully used the LMS?

Sure, there are a lot of great examples. Let’s take General Electric Corporation. GE has undergone a massive global transformation in pulling shared services out of its divisions, bringing them up to a corporate level, and consolidating them in a few “poles” around the world. And in doing so, they have been developing lean management systems within these poles. They’ve been able to demonstrate that by doing this, they’ve actually improved levels of these services that were formerly executed at the division level – at reduced cost. All thanks to consolidating services under the principles of the LMS. A great industrial example is Moog Aircraft Group which has done a phenomenal job of capturing the benefits of a LMS ecosystem, creating a lean culture change while achieving the business improvements they need to compete. The Arizona Department of Environmental Quality is doing great work in LMS as well in the difficult public sector. The principles of the LMS are universal, as is evidenced by these examples in office, industrial, and government success stories.

At the end of the day we have to remember that lean is about creating an organization within which everyone everyday comes together in small teams and asks themselves three questions.

This is what separates lean from every other process improvement methodology. It’s an all-in, collaborative, and team-based problem solving model. The LMS is the ecosystem within which this process of continual improvement thrives. 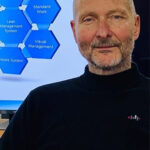 Joe has developed the knowledge of lean concepts and principles over the past 18 years while he held senior leadership positions in domestic and international settings. Through extensive coaching by retired executives from Toyota Motor Company in the early 90’s, Joe developed an aptitude for maximizing product velocity and managing…