I was fortunate to go to Japan in late 80s to study under a master sensei, Yoshiki Iwata from Toyota Gosei. 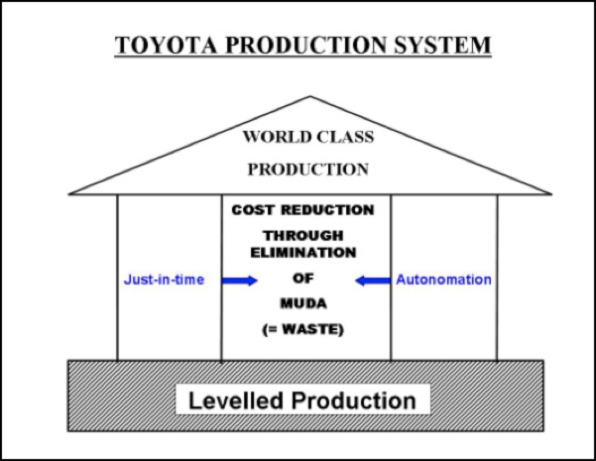 Toyota Gosei, a supplier of rubber components, was one of the first supplier companies to be taught the Toyota Production System by Toyota. Iwata drew for me this diagram of the TPS “house” which was originally drawn by Fujio Cho of Toyota.

The initial steps are designed to create stability, which greatly supports achieving sustained continuous improvement leading to better performance. Once better performance is realized, it’s possible to increase flexibility and responsiveness to demand. This specific sequence of steps is vital. You have to create stability first to eliminate the firefighting that’s so endemic in companies. Then you can progressively match output more closely to actual demand.

This diagram shows us another important point about TPS. To many people the prime focus of Lean is waste elimination. Yet, you’ll notice eliminating waste is in the middle of the diagram. Why do many people and organizations focus on the waste elimination aspect of Lean while ignoring levelled production? Most people don’t understand how Toyota progressively implemented the steps of levelling.

The term “levelled production” implies working with and producing the same amount consistently. How can this be achieved when demand isn’t stable? Well, it is indeed a conundrum.

It is confusing to people. Aspiring lean practitioners have a much easier time understanding the role of eliminating waste in improving work flow and cost reduction. Every value stream map will show them there are plenty of sources of waste to work on. So most people see this as the prime focus of lean, not levelled production.

The aim of the initial three steps of levelling is to produce products in a fixed schedule that is rigorously followed. Same products, same volume, on the same equipment, at the same time and… in the same sequence, every cycle. Step one: in a twice a month cycle. Step two: in a weekly cycle. Step three: daily cycles.

This seems impossible and ridiculous to most people, but only because it’s so counterintuitive. People think more changeovers and shorter runs will not make them more efficient – far from it. This is one reason levelled production goes missing from so many lean transformation attempts. It just flies in the face of conventional wisdom and habits.

The key objective of these first three steps is to create stability because stability is the foundation that makes it easier to carry out continuous improvement and root cause problem solving. Then we invest in improvements to achieve faster and faster cycles. Progressively faster cycles means production gets closer and closer to actual demand. Step four and five focus on producing exactly to actual demand. First, in very small fixed quantities, then just one item at a time (this is known as one piece flow). This is the ultimate objective of levelled production.

The progressive steps of levelling are described in more detail in the 2014 Shingo Publication Award winning book I co-authored with Rick Sather, VP Customer Supply Chain Kimberly-Clark USA, Lean RFS: Putting The Pieces Together. In his foreword to the book, Professor Dan Jones says: “This book is the missing link in many Lean journeys.”

I had an exchange of emails with John Shook on the subject of levelled production or heijunka. Here’s what he said:

“Many meanings are contained in the term heijunka. Unfortunately, translation often forces the translator to focus on just one aspect. You will hear Toyota sometimes refer to heijunka as the ‘objective’ of system improvement, showing it at the culmination of a series of steps and evolution.  Other times you will hear Toyota say heijunka is a ‘pre-requisite’ for attaining Lean that must be incorporated at the beginning. In fact, a ‘first stage’ heijunka is something we sometimes call ‘pattern production.’ A pattern of running each part number repetitively, perhaps using an 80/20 rule to differentiate high from low runners, is established. It is remarkable  that so few industries, companies, and people have arrived at this understanding of heijunka.”

Ian Fraser Glenday started his lean journey as a micro-biologist running a fermentation plant producing enzymes, where he first began developing Lean/RFS concepts and principles for application in process industries. After time out to gain an MBA from Bradford Business School he joined Reckitt & Colman. He led an MRPII project to class “A” status in their pharmaceutical division. He then moved to the house-hold and toiletries division where he was responsible for initiating and implementing a pan-European supply chain strategy based on the lean concept of “every product every interval”. He then became Head of Policy Deployment at Colman’s of Norwich where substantial increases in sales per employee, market share and profit margins were achieved by applying Lean Thinking across the whole company.

More recently Ian has been working with companies as an independent Lean coach and sensei. His approach to applying lean in many types of industries, including chemicals, paints, pharmaceuticals, grocery, food and drinks, is refreshingly different, instructive and always entertaining.

Ian has written two books on Lean: “Breaking through to flow” in 2009 and in 2013 “Lean/RFS: putting the pieces together”. Both books have won the prestigious Shingo publication Award.