The Lean Post / Articles / Why do lean management experts differ on how to apply lean principles?

I’ve worked with several managers who worked at Toyota or Toyota suppliers who were considered experts in the company’s management and production systems. Each seemed to have a different approach to applying lean principles. What’s going on? Why aren’t they all on the same page?

Fun question – hard to answer. Shall we agree that life is complex, and we never have the full picture? Shall we also agree that if we ask people to do stuff without them understanding why, they’ll probably not do it in a committed or smart way? The Toyota veterans I’ve come across seem to consider that their job is not to tell you what to do to get you out of this or that mess or help you improve but to get you to understand better what is happening to you so that you figure your way out. And to do so, yes, sometimes, they tell you to do something — the next step.

I’ve had the same experience you describe with Toyota veterans on the shop floor. They are quite happy to discuss the next step in a very concrete way. They will have different next steps in mind, and then when you start arguing or discussing higher level principles — you’re on your own. I don’t think they believe you’re wrong, per se. I think they believe high-level discussion, which we in the West need to figure out what we’re doing, is above everyone’s head and a personal matter, not something to get involved with.

My gemba experience has been that we have very concrete, practical discussions about very large principles without ever discussing at the principle level but always paying more attention at the observation level. It’s confusing.

If we take a step back, in knowledge sciences, we know that the best way to approach unknown problems is to throw several mental frames, or outlooks or theories at it and see what sticks: 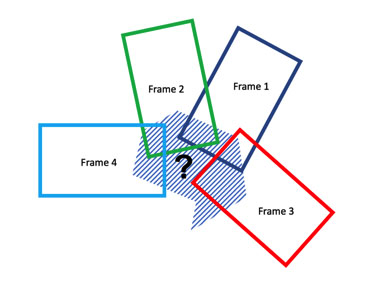 Reality is messy and complex, so by making different hypotheses from different theories, we get a better chance of grasping what is going on.

The second thing we know is that exploration is a matter of trying things and seeing what works and what doesn’t, discarding wrong hypotheses, and progressively getting closer to something that makes sense.

For instance, at the last lean conference I was at, a production manager was explaining they had a laser cutting problem on cloth, creating burns and rejects from too much laser refraction. Technicians were constantly fiddling with the laser itself until someone pointed out that the conveyor carrying the product to be cut got blocked and the flow of material to be cut was uneven. The flow of material was uneven because particles of melted material fell into its operation and affected the slates – which were never cleaned because it didn’t appear in the maintenance protocols.

In this case, technicians were endlessly fiddling with the laser, when the problem was a maintenance issue (and, as it turned out, not enough maintenance resources in general) – typically a cause distant in time and place from the symptom. In this case, the key to figuring it out was flow — the flow of material -– but they could have gotten there from another starting point, such as a manpower, machine, material, method analysis, or a TPM study of the conveyor and so on. Or they could have stopped operations at every burn. 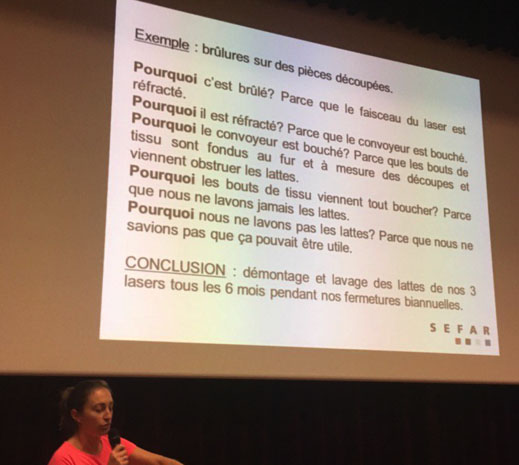 The beauty of the Toyota Production System (TPS) is that it is a frame of frames – these frames constitute the well-known TPS system: 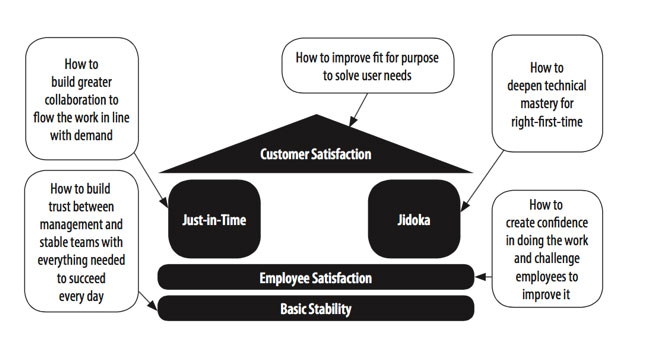 Each of these frames will get you a starting point into your problem. But a starting point is only that, a starting point. From this point, you need to practice the repetitive plan-do-check-act (PDCA) cycles that are the scientific way of asking “why?” until you grasp the root cause, the error in your calculations, that accounts for the wrong behavior which generates the problem in the end: 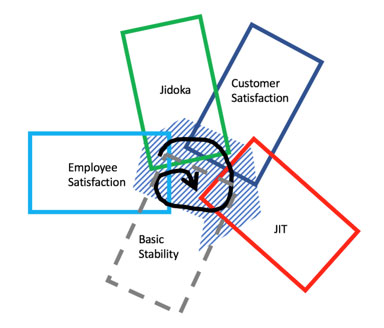 Which is why TPS guys will typically give you a different starting point according to their experience, who their own teacher in TPS is, what they think is best for you, and the simple fallible biases in their own observations. The very point of using the TPS as a discovery framework is that you don’t have to be omniscient – from a starting point and going step by step, you will eventually get closer to the root cause, and more importantly, learn as you do so (an alternative, for instance, is design of experiments, which gets you to the solution but never an understanding of why this is a solution).

One key initiation ritual is your lean journey is the “battle of the senseis” – being on the shop floor with two senseis you equally respect who start arguing about what they see. The only thing they seem to agree on is that you are an idiot. It’s easy to think “why can’t they all be on the same page?” until you realize your own gross misconception – they are not arguing, they are working.

Experienced people are wise enough to know just how complex, messy, and endlessly surprising reality is (the solution is often simple and obvious, but only in hindsight) and they are deliberately confronting their understanding of the situation to try to get quickly to a third place – closer to what goes on. They don’t think that they are not on the same page. They both believe they are practicing TPS, which has as a goal “think deeply.” The aim of the discussion is not to provide a specific solution, but a common understanding of the problem – from which a solution will come quite naturally.

Having said that, I feel your pain. We look up at more experienced people in our field, hoping that we can steal their magic insights, put these in our little black book of tricks and so “build our knowledge.” This naïve understanding of what knowledge is slows us down more than anything else. Knowledge is not about applying recipes, but transferring understanding. What more experienced people really teach us is how to be more flexible in our own thinking and more acute in our observations, using principles as guidelines to point towards where to look, but not as rules to replace deeper reflection.

Principles give you a starting point for observation and a direction to start digging. For instance, the flow principle shifted the production manager’s eyes from the laser to the conveyor. But stopping at every defect could have done the same. Or any other of the lean principles. Sensei give you a starting point and a starting direction to observe, discuss, try – but then you have to scratch your head and jump in and keep at it until you make more sense of what’s going on. That is the point of what they tell you.