A Journey of a Thousand Miles Starts With a Single Step. ~ Lao Tsu

Today’s coronavirus pandemic feels like a familiar echo to me. Through SARS and H1N1, and prior to that, I was extensively involved with the Names Project—the AIDS Memorial Quilt. The perspective that I’ve gotten from all of these, and which I carry forward right now in my Lean practice, is that you have to actually care about what is going on in order to affect change. That’s true in normal times, when you’re at the office or on the shop floor. It is true now, and it was true then.

Because once you do care, you will find that your job description quickly becomes written for you.

Caring about others, caring about quality, caring about professionalism. When you care, continuous improvement and action come naturally.  The problem is, in my opinion, most companies don’t value caring, change agents, or the introduction of new ideas.

At Turner Construction, CEO Peter Davoren says quite often that he would like Turner people to exhibit “active caring”. This sounds vague, but there is a distinct meaning. It is actionable.

It all boils down to agency and engagement. As an organization, Turner has multiple ways in which Lean ideas are being rolled out—a very strong, active, Lean effort. Those ideas are important, but what lays below them could be the answer to a familiar Lean lament, “Why don’t our Lean ideas stick?”

At Turner, they have something that they work on alongside Lean, which they call “The Right Environment”.  This is a precursor to continuous improvement that makes sure people not only have agency, but they have a social system that respects them and expects them, as professionals, to act on that agency.

The Right Environment lives in every construction trailer at Turner, but in very different ways.  It is not a best practice, but a good practice. Flexible and tailored to the people on that particular project.  Some fail at it, some do it half-heartedly, and some embrace it.

But how do they do it?  At Turner, they simply ask their professionals a few key questions: “Do you, as professionals, have working conditions that foster professionalism?”  “What do you want, and what do you need in order to get your job done?” “What can we do to make things better?”

And the sites that do it right turn the results of those questions into a system.

I’ve seen evidence of this practice at a one billion dollar construction project in New York City. At this site Turner has created a beautiful right environment in a trailer, where I believe Lean has found ways to thrive. Before the project began, people at Turner created better relationships with their stakeholders (owners, designers, trades, etc).  Initial planning for the project was transparent and collaborative. From the beginning, everyone knew there would be challenges and those challenges would be handled with professional care.

The team huddles daily, as subteams and as a whole.  Before the huddle, they do stretch-and-flex, a practice that came from Turner’s safety initiatives.  Stretch and flex is basically a routine set of calisthenics. On other sites, I’ve watched people grumble and grudgingly work their way to the stretch-and-flex point and wiggle around until they are allowed to go back to work.

In this trailer, their right environment has a strong personality. Each morning, a different team member leads, with loud music that often has a story.  (“What do you mean you don’t know who Chuck Berry is?!”) It sounds hokey, and impossible, but this trailer has people rushing to get to work for stretch-and-flex.  Imagine, they are anxious to get to what others consider to be a chore.

When those people do their huddle and then get to work, the trailer is buzzing…all day long. It isn’t Lean that’s doing that. It’s not the huddle. It’s not their Personal Kanbans. It’s excitement that they get to work with people they respect, who respect them back, and who they know they can count on.

Just to refresh here…to start this, what they did was ask what people needed and made sure they had it.

The first step in systems thinking is to create an environment in which a system can operate.

Building Upon a Foundation

Whether you call it right environment, or active caring, or respect for people; this refers to tangible daily practices that must be continuously re-instantiated. The team in our well-run project above is very aware that their working environment is enjoyable and that they have a responsibility to maintain that environment.  This involves small daily improvements, it involves actively caring about colleagues and partners, it involves being keenly interested in the quality and the safety of the job.

So What Do We Do Now, Like Right Now…

In epidemiology, when we’re dealing with a situation like we are today, there are two things that we need to do.  We need to 1) stabilize the problem, and then 2) work systematically for solutions to not only this problem, but any root causes we discover along the way.

When I was in the middle of the AIDS Pandemic, there was daily learning.  Daily learning doesn’t mean that there was “value added progress” every day. We had something better than that: every day the impacted communities learned to be better communities. It meant that every day people learned what they could and could not personally do to slow (and ideally stop) the spread and care for the sick.

More importantly, it means we felt like progress was made (heated blood recirculation, vitamin therapies, cancer medications, etc. etc.) even when those learnings turned out to be dead-ends. It meant valuing learning and experimentation.  It meant valuing conversations. It meant recognizing that any endeavor is not the output of production, but the learning that went into that production.

As Lean practitioners, we need to recognize that Lean isn’t what’s going to make Turner bounce back from this as a company, it is their culture. It is their right environment.

And what we should do right now, like right now, is see the wisdom in their foundation.

Saint Joseph’s hospital sits in downtown Vancouver; and every day at 7PM when the shift change happens every person in the nearby housing towers comes out on their deck and applaud. Their cheers can be heard for miles..

Imagine, you have just spent a very long work day, in highly uncertain conditions, literally risking your life when you flip a switch or pick up a piece of equipment … or breathe.  And you leave work, tired and drowning in other people’s suffering, and the entire city recognizes that.

It’s bigger than us.

And that’s the stuff that we as Lean practitioners, have to start figuring out how to do. Not contrived nor pre-packaged, but real stuff that says, “We’re all professionals. We are all in a situation together, going from complete chaos to complete predictability. How do we treat each other as professionals, in order to get real work done?”

Recycle Your Boxes of Change

I would caution would-be change agents from helping others by showing up and saying: “I have brought you a Box of Change™ from Change Central. Change is now about to happen to you, and when it is done, you will be changed and you will be so happy.” Because to do so risks inflicting more harm to an already damaged space.

The opposite approach would be to go in and you ask people: “What hurts?” After which you let them figure out ways to fix what hurts. And, have the guts not to apply some of the tools that you are already familiar with.

So, get this, I’ll describe the most Lean thing I’ve ever seen. Capital K Kaizen. Kaikaku masquerading as Kaizen from people who don’t know what Kaizen is. It was an effortless game-changer.

The construction industry is always looking for ways to improve safety. It is a dangerous field to work in. I’ve been on sites where it has been 20 below and then a few months later 130 degrees.  In one setting it’s hard to feel your fingers in the other it’s hard to keep a grip on the hammer.

In both, you’d rather be at the bar.

The workers in our now-lauded Turner trailer didn’t stop with respect for themselves. They extended it to the jobsite, creating a space for the trades that are often working in some pretty harsh conditions.

Modest and perhaps confusing to most of us pampered workers, the team wanted to share their right environment.

An oasis in the desert.

Above all you can see the desire of the people in the trailer to extend the gifts that they had given themselves by setting up a right environment. This tells me that if you give somebody not just permission to pay attention and be nice, but you actually give them a system that expects that, then that becomes part of their job. After that, no one ever needs accountability, because the system itself has now fostered professional responsibility. It’s absolutely beautiful.

This system provides what is pretty close to immediate feedback. It supports the shared expectation that everyone’s job is to make sure that the building is built safely, on time, on budget, in a humane way. And the shared work approach continually monitors the key challenge of: how can I personally make today better than yesterday? 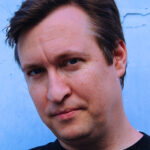 A pioneer in applying Lean and Kanban to knowledge work, Jim is the creator of Personal Kanban and co-author of Personal Kanban: Mapping Work | Navigating Life, winner of the Shingo Research and Publication Award. His other books include Why Plans Fail, Why Limit WIP, and Beyond Agile. He is the CEO of Modus…