Thanks to those of you who joined last week’s webinar. We had some great questions, only a few of which we dealt with during the limited webinar time. One specific request I’ve received is that I spend more time introducing the new LEI book Kaizen Express. If Kaizen Express is intended as an aid in the “forward to fundamentals” movement, just what kinds of things does it hold in store?

Kaizen Express is retro. I described it last week as “a throwback to an earlier era of lean discovery.” It has short chapters, each introducing a major lean process with a quick overview to place the concept in context, a concise summary of the process/tool/technique itself, concluding with a simple dialogue of how it might come up in practice on the plant floor.

That Japanese publication of Kaizen Express, now in its second edition, was intended primarily as an aid to Japanese readers and to non-Japanese working at Japanese-affiliated factories around the globe. As English is the official language of most multinational companies, our hope was that Japanese and non-Japanese could use Kaizen Express to learn TPS together. That’s why Kaizen Express is a primer—covering the basics of TPS—but also comprehensive, covering most of the topics a production team might need to learn in its first year or two of implementing TPS.

It came as a pleasant surprise, after the publication of the Japanese edition, to receive requests for more “global” versions of Kaizen Express. Evidently, there isn’t really a similar global, comprehensive, primer for TPS—in any language. The first request came not from the USA but from Taiwan, where our good friend and deeply experienced TPS practitioner Joe Lee of Toyota Kuozui Taiwan has concurrently developed a version of Kaizen Express for readers of traditional Chinese in cooperation with the Corporate Synergy Development Center in Taipei. That version is English and Chinese. Since the design of Express is “modular” in nature, we expect future versions of Express in different language combinations, such as Japanese-Spanish or English-Italian.

I have received a lot of questions about my hope for a “best of both worlds” approach to emerge—an approach that combines the best of Japanese and non-Japanese methods of developing people and even lean transformation. There are clearly plusses and minuses of both approaches.

Kaizen Express introduces TPS and kaizen in somewhat of a typically “Japanese” way. It uses many visuals, with illustrations on each page. It offers pragmatic, action oriented things you can try right away. If you’ve ever studied karate, aikido, or most any Japanese or East Asian art form, you will see similarity immediately. “Learn the thinking through practicing the patterns.” That way the practices become habits and instincts. It’s reminiscent of these amazing words of Taiichi Ohno from Birth of Lean:

“Whether or not people recognize problems and go to work solving them is a matter of instinct. Once you’ve developed that instinct, you notice all sorts of things.”

Pretty interesting, isn’t it? “Instinct” as a skill to develop. It’s that kind of thinking that underlies the “philosophy” or approach of the materials in Kaizen Express.

Let me illustrate how the book seeks to introduce TPS in a method that is consistent with key lean principles. One of my favorite teaching materials from Kaizen Express addresses the topic of your beliefs about efficiency. This isn’t new, but two important reasons to draw attention to it are: (1) it’s another extremely important yet forgotten or ignored concept, and (2) for the first time, you can see several important related concepts on the same page. Presenting them together provides a more complete view of the broader topic of “efficiency,” a subject to which Toyota people have always given great thought. 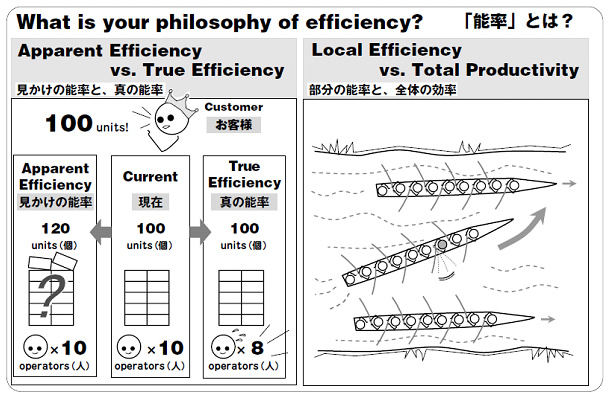 On the left-hand side, you can see two “philosophies of efficiency” that are essentially the same mathematically. Most people work on the one that Toyota labels “apparent efficiency.” During times of growth, it is natural for managers to seek efficiency that way. After all, they need to grow to keep up with demand.

But, just as times of affluence can hide tremendous waste, so too can chasing apparent efficiency hide the incapability of achieving “true efficiency.” That means matching output to customer demand (to do more would be overproduction) but doing so with ever decreasing use of resources.

If you have the organizational and operational capability of achieving the second type—true efficiency, or the same output with fewer resource requirements—then you can also easily attain the other type—greater output with the same resources.

That’s one of the first and most fundamental of TPS lessons, yet I rarely see “lean” companies attaining, pursuing, or even discussing it.

On the right-hand side is a graphic I must have shown hundreds of times. I can’t imagine a simpler, clearer illustration of the distinction between individual efficiency (local optimization) versus system efficiency (system optimization). This one is conceptually easy for engineers, appealing for anyone, yet extraordinarily difficult to attain. In fact, it may be that its relative attainment is the source of Toyota’s greatest strength.

I hope that readers find Kaizen Express helpful. This resource is the expression of an approach to kaizen that is at once a return to basics while at the same time emphasizing the centrality of individual and team learning. Kaizen Express is founded in the belief that the thinking of TPS can only be achieved through doing, embodying the quote I repeat over and over:

One last note: Kaizen Express lead author Toshiko Narusawa doesn’t really like me to introduce her as I did during the webinar, as the ”top woman TPS sensei in Japan” but it must be true. Most operations in Japan remain male-dominated, but I am hopeful that the number of women with deep TPS implementation and coaching experience will grow.
John