As the continuing lean transformation at Phase 2 Medical Manufacturing, Inc., freed up capacity, the volume of work from customer Medtronic tripled with minimal growth in operating costs, just as planned. But as overall sales continued to grow, the company faced the costly prospect of having to expand the on-site warehouse.

“People struggle with the role of ERP in lean because ERP wants to run the shop floor over the pull system,” said Phase 2 President Adam Prime. “Finding the balance of the two is difficult.” For example, a major conflict is ERP’s traditional dependence on ship dates to drive production, while lean management uses pull systems to produce and replenish products in small lots based on actual consumption.

An ongoing lean management effort  had transformed Phase 2’s clean room production lines from kitted batch production to leveled one-piece flow in cells, fed  by a two-bin point-of-use pull system. A material handler picked up empty inventory bins and brought new parts to the line hourly from a redesigned warehouse, where min-max levels of parts on flow racks had been calculated in a PFEP spreadsheet.

“Now we wanted to take that same philosophy and expand it  to the supply base,” Prime said. The overall goal was to obviate the need for a new or larger warehouse by increasing the velocity of parts through the existing facility. The supply chain team had to extend the existing pull system out to suppliers while integrating separate kanban arrangements for individual inventory items into one unified pull system that was easy to maintain and monitor.

To start, Phase 2 asked suppliers of high-volume parts to join the pull system, which would use kanban cards circulating between the company and suppliers to place frequent orders based on leveled demand, not ERP forecasts. The ERP system’s MRP function would continue to generate orders for low-volume, rarely used parts. The pull system between the warehouse and production lines didn’t change.

Phase 2 approached suppliers as partners, according to Prime. “We weren’t trying to get something for nothing. We were trying to make the system easier for everybody, and we were  willing to own the liability for the finished goods sitting at their facility. That’s only fair.”

A big challenge and a big reason why kanban often fails is because the underlying PFEP database is not updated.  “Companies will put together a PFEP for a point in time when starting a pull system,” said Dave Errico, lean deployment program manager at Medtronic, who helped Phase 2 plan and launch its lean management system. “But few companies maintain it very well. Business conditions change, but it’s not updated. It really has to be owned by the supply chain element of the organization.”

That means regularly reviewing and updating – at least quarterly — all variables in the PFEP database. Typically, a PFEP holds data about where every part comes from, where it goes in the warehouse, and how it is used. For example, a PFEP database contains such categories as part description, point-of-use location, standard container quantity, order frequency, carrier, container type, length, width, weight, daily usage, supplier name, supplier city, supplier state, delivery frequency, transit time, and other data.

Phase 2’s supply chain team also would have to update the database when demand, lead time, storage locations, etc., changed. With no off-the-shelf software exactly suited to automate the updating and other functions, Phase 2 faced a lot of manual work to keep the data fresh for thousands of parts.

Working with Qlik dynamic reporting software, the Phase 2 development team created a new PFEP database that would support the new pull system while being tightly integrated into the traditional ERP software. The PFEP would no longer be a separate database but rather a front end to the ERP system in order to use the system’s data to automatically performs the updating calculations.

This PFEP page, broken into two lines, shows information entered in categories in the smallest elements possible. If the company had used a single entry to identify container size – e.g., 12 inches wide by 6 inches high by 10 inches long – it would have been impossible to sort just by height, critical information for designing storage locations. The company created a separate category for each dimension (width, height, and length). Similarly, if the city, and state of  suppliers had been entered on one line it would have been impossible to sort by city or state  to organize future  milk run deliveries from suppliers. (Copyright, Making Materials Flow, Lean Enterprise Institute, 2003. All rights reserved.)

The supply chain team populated the ERP with PFEP data. “It was quite a project,” Prime said. “We didn’t use ERP as originally intended or designed, but we didn’t shut it off either.”

Work began in September of 2014; the system went live in March 2015. Key features of the hybrid system included a built-in PFEP dashboard that is tied to variables in the ERP system.  As such, the system allowed supply chain staff to easily view and access the proposed kanban system for any part in the ERP system, as well as its expected output (inventory turns, incoming inspection costs, carrying costs, frequency of receipts, etc.). Toggles on input variables (safety stock, addition of days between receipts, etc.) allowed the users to run “what if” scenarios to optimize the system performance.  Tying the PFEP to the ERP also enables the system to update kanban recommendations as variables change and to notify supply chain staff in real time about potential problems. Say demand as entered in the ERP doubles for a component. The PFEP system identifies the change, assesses the capability of the existing kanban system and sends a warning to the responsible buyer to check inventory levels because a variable has changed. 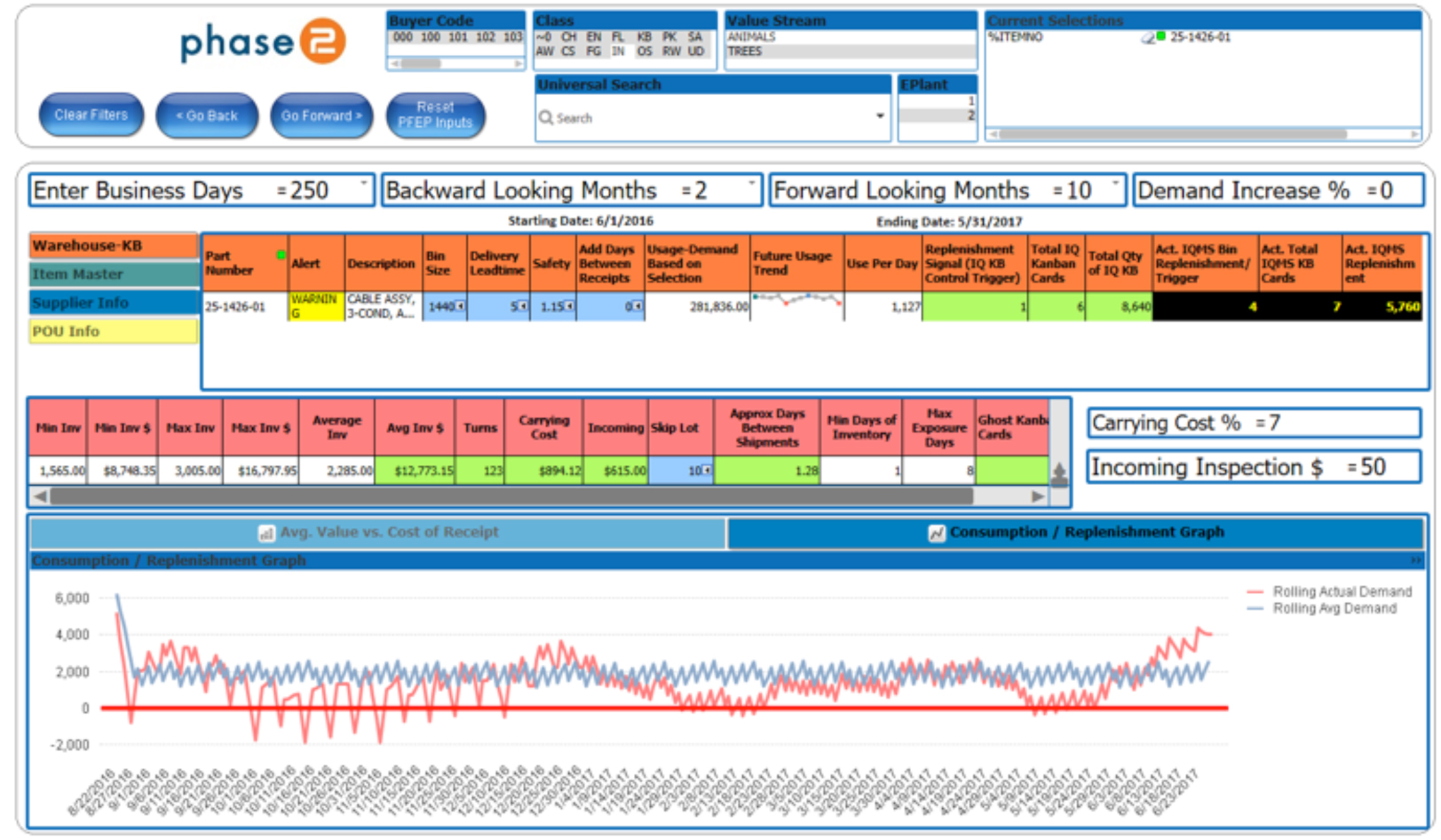 A dashboard shows data from the PFEP at the top and, below, plots rolling demand against rolling actual demand. Source: Phase 2.

Normally, when a container in the warehouse is consumed, a supply chain associate scans it into the ERP system. At a set trigger point, the ERP system will write a line item to a purchase order and notify the responsible buyer, who, as part of his or her daily standardized work, reviews it before sending it to a supplier. But, if for some reason, a card is triggered on the floor but not in the ERP system, a buyer won’t get a signal to buy more, potentially causing a stock-out.

To make sure that doesn’t happen the dashboard displays key data showing what the ERP/kanban system thinks is the warehouse. Every day before a morning team huddle, a supply chain associate prints out copies of the dashboard for posting at the ends of aisles in a section of the warehouse. Later that day, as part of a kamishabai, another associate checks what is actually on the racks against the dashboard printout. Every 30 days all warehouse locations are checked. Low-risk abnormalities are identified on a countermeasure sheet and reviewed weekly.  High-risk abnormalities are immediately brought to the attention of the buyer.

So far, the system has been “quite effective” for our warehouse, suppliers and buyers, Prime said. After initial resistance, more and more suppliers are joining the expanded pull system, although there still are a couple holdouts, he said In fact, some suppliers are extending the system to their suppliers.

“When I talk to the buyers, they’re very happy with the systems,” Prime said. “They have more time to accommodate growth and to develop stronger relationships with suppliers. We haven’t run out of any kanban parts. We have run out of solder that was on MRP.”

Best of all, there are no plans for expanding the warehouse. The new pull system has reduced required inventory space by a third and Phase 2 is  well on its  way to increasing  inventory turns by a third.