The Lean Post / Articles / Standardized Work is a Goal To Work Toward, Not a Tool to Implement

Standardized work is foundational to the Toyota Production System, yet remains one of the most misunderstood principles to outsiders. It is crucial to understand the true purpose of this foundational practice. Standardized work in the context of the Toyota Way refers to the most efficient and effective combination of people, material, and equipment to perform the work that is presently possible. “Presently possible” means it is today’s best-known way, which can be improved.

Like so many organizational practices, Toyota has turned the practice of standardized work on its head. In the early days, armies of Tayloristic industrial engineers roamed the Standardized work refers to the most efficient and effective combination of people, material, and equipment to perform the work that is presently possible.factory, timing workers and imposing on them “the one best way,” which led to performance standards they were judged against. It was coercive, and workers and unions fought against it or used it to place a cap on the work pace. Toyota turned standardized work on its head and made it a tool for work groups to control and improve their work. In Paul Adler’s terms, it became part of “enabling bureaucracy” rather than “coercive bureaucracy.” Rather than forcing rigid standards that can make jobs routine and degrading, at Toyota, standardized work is the basis for empowering workers, sharing ideas for improvement, and driving innovation in the workplace.

The critical task for standardized work is to find that balance between providing employees with rigid procedures to follow and providing the freedom to innovate and be creative in consistently meeting challenging targets for cost, quality, and delivery. The key to achieving this balance lies in the way people write standards, as well as who contributes to them.

First, the standardized work must be specific enough to be a useful guide, yet general enough to allow for some flexibility. Repetitive manual work can be standardized to a high degree by detailing sequences of steps and times. On the other hand, it would not make sense in engineering to specify a step-by-step way of performing the work. There are general plans with milestones, and then technical information about the product that appears in engineering checklists. For example, knowing how the curvature of the hood of a car will relate to the air/wind resistance of that body part is more useful than dictating a specific parameter for the curve of all hoods. In product development, this is often represented as trade-off curves.

In her book Steady Work, author Karen Gaudet shared that she learned about standardized work at Starbucks, giving a very different picture from the Tayloristic view of people as erratically functioning robots:

“Humans just are not hardwired for repetition, it seems. And in service industries, quality human contact is central to the work. Human contact and standardization can seem like oil and water. But here is the truly important discovery from our observations: when task standardization is adopted and steady work cadences are achieved, people are freer to do the satisfying work of making human connections. When work tasks are both repeatable and rote, managers, executives, and frontline baristas all have more space in their lives to chat a little, to ask questions, and to listen to others.”

I think the problem with how many organizations use standardization results from our old nemesis, the mechanistic perspective. When the organization is viewed as a machine, then standardized work is a tool that is intended to make it a better machine. The figure below presents a common graphic in lean training that shows standards as backstops. You figure out the best-known way to do the job, write out the worksheet, teach it, and then shove the standardized work in place to prevent the process from slipping back. This approach ignores the fact that it is the person who can slip back, not the process. People have a way of doing the work they are comfortable with, and developing any new habit takes repetition—and practice. 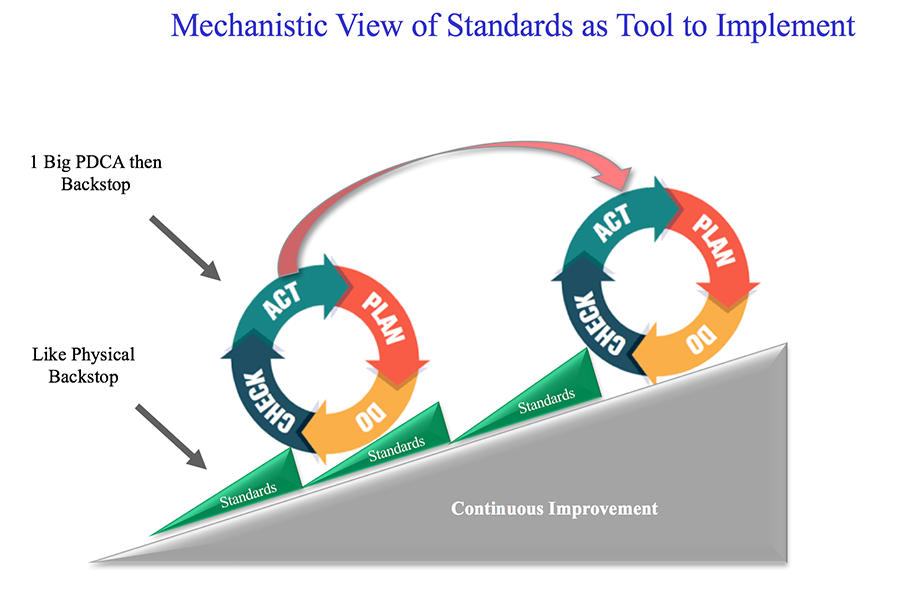 The following figure presents a more dynamic, fluid view of standardized work that recognizes the time and effort required for humans to learn a new way of doing things. In this case, I used the model of improvement developed by Mike Rother that is part of Toyota Kata. Kata are ways of doing things in the martial arts that you have to practice repeatedly with a coach to develop the skill and reduce variation. Kata also form the basis for job instruction training, practicing small pieces of the job repeatedly with a coach. The ideal state is to have standardized work that is practiced consistently by people, coupled with step-by-step improvement through rapid PDCA cycles. The next level of performance can be thought of as a “target condition” that people need to strive for. You do this by experimenting with different methods for doing the work, and then when a performance threshold is achieved, you document the process and teach it as the best-known way at that time. You turn the standardized work document into consistent behavior through job instruction training, which develops the new habits through repetition. Then the work group starts on the next lap with the next target condition (level of performance), experimenting and finding a better way. In this way standardized work and continuous improvement become two sides of the same coin. 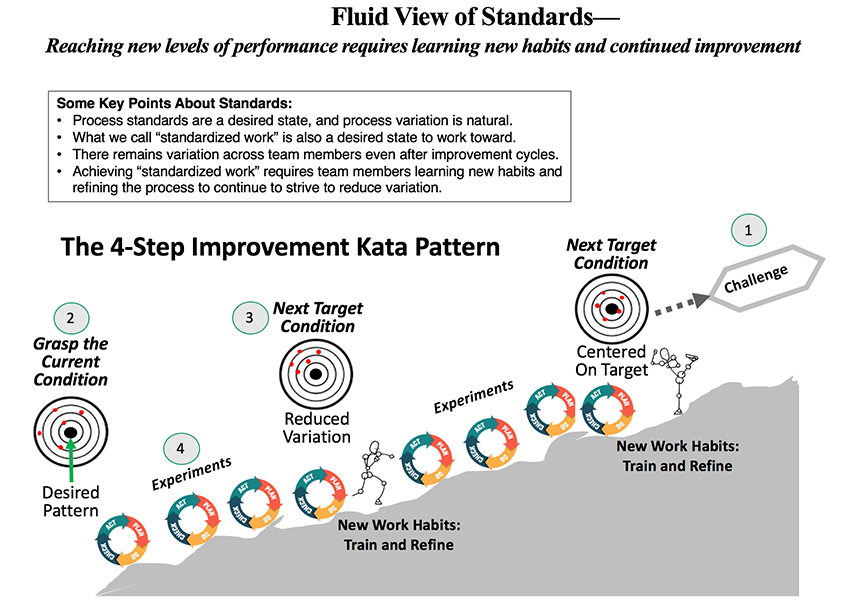 Standardized work can be an ugly thing in the hands of control-oriented bureaucrats and a beautiful thing when it enables creativity and continuous improvement. Enabling bureaucracy takes more effort, but it is worth it.

(This article is adapted from Jeff’s recently published The Toyota Way 2nd Edition: 14 Management Principles from the World’s Greatest Manufacturer.)

Dr. Jeffrey K. Liker is Professor of Industrial and Operations Engineering at the University of Michigan, owner of Liker Lean Advisors, LLC,  Partner in The Toyota Way Academy, and Partner in Lean Leadership Institute. Dr. Liker has authored or co-authored over 75 articles and book chapters and eleven books.

He is author of the international best-seller, The Toyota Way: 14 Management Principles from the World’s Greatest Manufacturer, McGraw-Hill, 2004 which speaks to the underlying philosophy and principles that drive Toyota’s quality and efficiency-obsessed culture. The companion (with David Meier) The Toyota Way Fieldbook, McGraw Hill, 2005 details how companies can learn from the Toyota Way principles. His book with Jim Morgan, The Toyota Product Development System, Productivity Press, 2006, is the first that details the product development side of Toyota. Additional books in The Toyota Way Series are (with David Meier), Toyota Talent: Developing exceptional people the Toyota Way (May, 2007), (with Michael Hoseus) Toyota Culture: The Heart and Soul of the Toyota Way (January, 2008), (with Gary Convis) The Toyota Way to Lean Leadership (2012), (with James Franz) The Toyota Way to Continuous Improvement (2012), (with Tim Ogden) Toyota Under Fire  (2012), and (with George Trachilis) Developing Lean Leaders The Toyota Way  (2014). His articles and books have won eleven Shingo Prizes for Research Excellence and The Toyota Way also won the 2005 Institute of Industrial Engineers Book of the Year Award and 2007 Sloan Industry Studies Book of the Year.