As 2019 begins, don’t feel bad if your New Year’s resolutions have already gotten off track or if that has happened in the past. Various studies suggest that 80 to 90 percent of resolutions fail. Whether our resolutions are about doing more of something, like reading, or doing less of something, like eating brownies, we often get tripped up because our change is too large — it might be framed as all or nothing. Lessons from psychology and workplace continuous improvement approaches show that “baby steps” is a more effective approach to making our resolutions take hold and stick.

The Kaizen approach emphasizes small, incremental improvements that are driven by the people who do the work. Unfortunately, organizations often discount the value of small ideas. By definition, they do not have the large ROI or impressive benefits that come from big, complex projects. But, Professors Alan Robinson and Dean Schroeder have shown, through their research, that 80% of the overall improvement potential in an organization comes from these smaller improvements (see their excellent book The Idea-Driven Organization and listen to my podcast with Robinson for more).

The three Indianapolis hospitals in the Franciscan St. Francis Health system implement thousands of “kaizen” improvements each year, generating an accumulated multi-million dollar impact (along with other benefits related to patient experience, employee satisfaction, and more). One classic kaizen lesson that’s taught at Franciscan is the idea of “baby steps.” If somebody has a big idea, we can reduce the risk (and increase our chances of success) by starting with baby steps instead of taking a huge leap.

For example, a nurse at a hospital I worked with had an idea about buying a caddy that would attach to a bed rail to hold a patient’s glasses and other personal items. This was intended to solve an important problem — items falling out of reach and sometimes getting broken. The nurse’s initial proposal was to purchase a particular caddy for each of the hospital’s 300 beds. A proposal like this was a modest expenditure for the hospital, but it was one that would be easy to reject for a number of reasons. To prove out the idea, the nurse accepted my suggestion to start with one caddy, which could be ordered by his manager without bureaucratic delay. If the caddy turned out to have problems, it would be a less-expensive “failure” that would just lead to the organization trying a different (and perhaps less-costly) solution.

Back to the personal realm, we might have resolutions like, “Stop eating sweets” or “Read a book every week.” These are well-intended and positive changes, but our brain can get in the way of progress. Robert Maurer, Ph.D. is a psychologist at UCLA who has studied people and their fear of change. You can listen to my podcast with Maurer and check out his book The Spirit of Kaizen, which happens to be one of the few American books that Toyota sells at their visitor center in Japan.

Dr. Maurer points out that people get scared by big changes, even positive ones — it’s human nature. It’s literally caused by our amygdala, sometimes referred to as our “reptile brain.” Instead of spouting platitudes about not being afraid of change, a more effective approach is to recognize and accept that the “fight or flight” reflex kicks in when we are presented with large changes.

We might quickly convince ourselves that we’ll never give up sweets altogether, and we certainly won’t have time to read a book every week, so why bother trying? Our resolution might get quickly derailed before we really get started. Dr. Maurer has researched and written extensively about the workplace kaizen philosophy and how it can be applied, with great success, to personal change. One lesson is that the only way to avoid triggering the amygdala is to make change small enough that it’s not scary.

For example, I took a suggestion directly from one of Maurer’s books. I’m often presented with the opportunity to eat cookies or brownies at meetings or conferences, a treat that I enjoy… but also regret. The baby steps kaizen approach eschews going “cold turkey” on the baked sweets. The first step is to tear off a bite, throw it away, and enjoy the brownie. You’re only depriving yourself a little bit. You can incrementally work up to avoiding larger chunks of the brownie, to the point of having just one bite and getting your satisfaction from that. This approach is a slower, yet surer pathway to saying “no” to the brownie altogether, although I readily admit to being the king of cutting a dessert in half if there’s a knife or tongs available.

You could also get your book reading resolution back on track (or started) with the kaizen approach. If reading an entire book is too daunting of a goal, set a baby steps goal of “I’ll read five minutes before bed.” When we experience even a little bit of success, it provides positive reinforcement that allows us to continue. We can then increase the amount we read by a few minutes each day, which might allow us to reach that goal of a book per week (or we might dial back to a more reasonable goal, which is better than giving up altogether).

So, as you think about your 2019 resolutions, ask yourself if you’re making the change too big and, therefore, too scary. Instead of feeling dejected, take the kaizen advice of making the change small. By embracing baby steps, we can actually accomplish much more (or eat far fewer brownies). 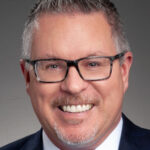 Mark Graban is an internationally-recognized consultant, author, professional speaker, podcaster, and entrepreneur. He builds upon a deep education in engineering and management with practical experience working with executives and frontline employees in multiple industries to synthesize and practice methods including Lean management, continuous improvement, statistical methods, and people-centered leadership approaches.…