Battle Creek, MI, where Toyota’s largest supplier Denso is located, was just added to my list of places to “go see” when the pandemic subsides. Why? Because I read about their use of Artificial Intelligence (AI) and the Internet of Things (IoT) in creating standardized work. Jeffrey Liker reports on this example of Industry 4.0 in his upcoming revised edition of The Toyota Way (due out October 2020), an excerpt of which was published recently on the Lean Post.

Like many of you, I fancy clever new technologies, and would like to check out Denso’s gizmos. Liker says, “When combined with highly developed people motivated toward goals of serving customer and helping the company, [technology] can multiply kaizen—faster and better.” Cool! AI/IoT can get data that’d be very difficult, if not impossible, to get manually and “see” patterns and trends that were invisible before.

Raja Shembekar, vice president of Denso’s North American Production Innovation Center, elaborates: “The technology provides data that allows the associate and the team leaders at the gemba to provide a far higher level of decision making. In the past, they would just fill out the paperwork…” Record scratch! Just fill out the paperwork? He goes on to lament how inefficient things used to be, saying, “…by the time they did all that they had either no time or energy to really comprehend the data. … We can’t afford to have PDCA that takes three weeks anymore. We want a PDCA done before the end of that shift.”

Shembekar’s desire to shorten the lead-time to improvement is perfectly understandable. Who doesn’t want to get better faster? But his comments about efficiency and just filling out the paperwork makes me wonder about the first ingredient in Liker’s recipe – highly developed people. How does that happen if not on the job, painstakingly, while creating standardized work the old-fashioned, yet tried and true, way?

Let’s consider the, ahem, process of filling out a Process Study Sheet (PSS). 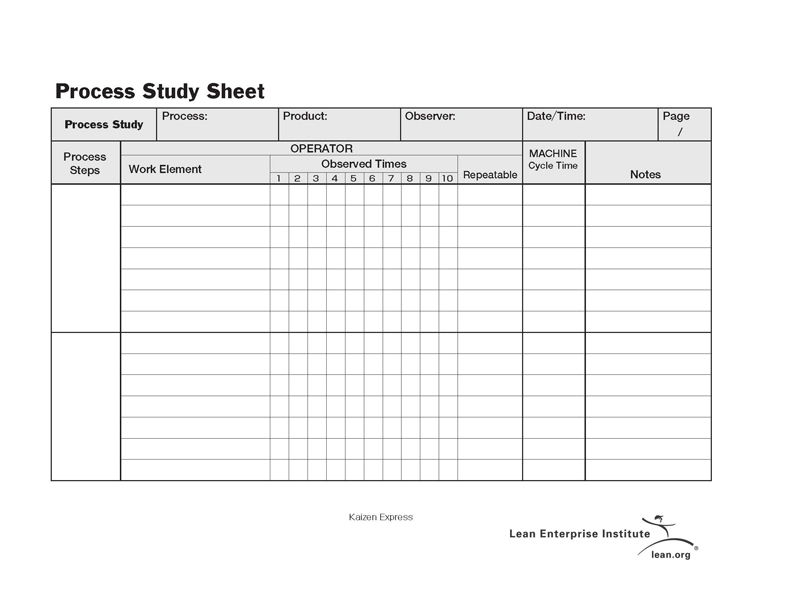 After the top of the PSS is filled out with some basic facts, we begin by identifying the process steps and work elements, listing them in sequence. To do this accurately requires us to observe the work directly. Sounds simple enough. But to see what’s really happening, there must be mutual trust. And as I’ve written about before, establishing that ain’t easy. Not only is trust needed to see reality, without it, will the worker be comfortable enough to change how they’re working?

The next challenge (and self-development opportunity), can also be found while identifying the work elements and their sequence. For fun, the next time you can sit safely in a coffee shop for a while, watch a barista preparing a handful of drinks and try writing down the work elements. What you’re likely to see is the work done differently every time, even by the same person. And this is work that is relatively simple. To really challenge yourself, try doing this for multiple baristas. You’ll see all kinds of variation! So, part of filling out the paperwork is reaching agreement with the barista(s) on one repeatable way of working. “But I’m not a robot!” she may protest. “But we need a baseline for improvement,” you’ll offer in rebuttal. Sounds uncomfortable, right? Sounds like learning.

Once trust and cooperation are established, it’s time to time. But be careful, pulling out that stopwatch will test the budding relationship you’re nurturing. The PSS suggests we should time the process ten times. There’s nothing magical about the number ten, but doing so repeatedly will reveal things that are hidden at first.

For example, and returning to the barista handcrafting espresso drinks, you might see a wide range of times for the “aerate milk” work element. Sometimes it only takes a second. While other times it takes ten! Upon asking the barista about this fluctuation, you might discover she doesn’t have a standard technique. Being the affogato aficionado you are, you know this is a red flag for quality.

So now, immediately, efficiently, you’re on the path to improvement, investigating why. A corrective action can be put in place such as sharing with her the work standard (easy, if one exists) and/or creating a work standard (not so easy, especially given it’ll be for the entire team, and company for that matter) and/or teaching her how to follow it (which also ain’t easy.) All this while digging for the root cause so the problem, i.e. fluctuation and the customer waits it causes, can be resolved once and for all. All this while learning. Developing.

Effectiveness Over Efficiency, of Existential Importance

I could go on. From experience, you probably could too. The point here is that while AI/IoT can add to your data set, it can’t “see” everything. Moreover, it doesn’t challenge you to build trusting, cooperative relationships that are essential for change to really happen…and stick. As a potential result, while the AI/IoT machine is doing its thing, you aren’t learning and developing both the technical and social capabilities that lean thinking and practice are predicated upon. In that sense, the most valuable aspect of LT&P is tossed aside like an obsolete technology. A tragic outcome, whether intended or not.

I want to be clear. I’m not saying this is what’s happening at Denso. How could I? Besides Liker’s report, I have no idea what’s going on there. I hope to someday by visiting their gemba. But, I do believe it could be happening there, or anywhere else for that matter, where tools for efficiency – AI, IoT, or even an old school solution like Excel – are being used to avoid perceived inefficiencies.

McKinsey & Company, in a recently-published article titled “Closing the skills gap in retail with people analytics,” claims 52% of all activities in retail can be automated with existing technology. Some “high-value roles” that will remain “include team leaders, customer-facing sales associates, and experts who float across departments to disseminate knowledge and coach employees on new tools or approaches.” It goes on to say retail companies are deciding which capabilities to build, buy, or borrow. Okay. But for the first option – to build – the question is, how? One answer, I’d argue, is to have folks start filling out the paperwork for standardized work. It’ll be challenging. Absolutely. And isn’t that the point?

Joshua Howell is president and executive team leader at the Lean Enterprise Institute (LEI). For over a decade, he has supported individuals and organizations with lean transformations for improved business performance. As a coach, he helps people become lean thinkers and practitioners through experiential learning, believing such an approach can…