The Lean Post / Articles / Why do you keep referring to Toyota; does it still matter?

I’m very interested in lean, but fail to see why you guys keep referring to Toyota. What does a Toyota plant look like and why should it still matter?

Fair point. I can’t speak for other lean writers, but personally, I keep referring to Toyota because I firmly believe they invented a new management paradigm and they keep being an inspiration to me.

What does a Toyota plant look like? Here’s a YouTube video of the Tsutsumi plant in Japan, producing the Prius.

I agree all car plants look the same, particularly if you’re not familiar with car assembly – the question is indeed: “What is so interesting about this?”

Here, for instance, is a Chevrolet assembly plant, and if you put both videos side by side, your first reaction is likely to be “same difference” – what’s the big deal?

Now, let’s put on some lean glasses and look for “one-second waste.” Why one second?

The first thing to notice in the Toyota plants (though many other automotive plants do so now as well) is that although it looks like “mass production,” each car is unique, like people queuing at a bakery. Each car has a kanban card attached to it, with its identity and specs, in terms of options and so forth – which determines the work content to be done on the car.

What are we looking at? We’re looking at how fluid operator movements are because people are confident in:

Old time lean; we learn to look at 1/ feet movement, 2/ hand movement, 3/ eye movements, and we look for struggle or waiting – any break in the fluidity and flow of the movement. We look for:

Struggle: Every time the operator places a part or uses a tool to place a part, does he or she struggle? Does it go right in, or, for instance, when they use a screw gun, do they have to hold the screw in place and look carefully if the screw goes in right. You’ll notice three things in the Toyota plant:

Such fluidity is achieved through 1/ training (and training and training) until the basics of each operation become second nature (which involves a lot of showing people what to look for and where to look) and 2/ kaizen, in a general sense. It’s not obvious at first glance, but this is not just operator kaizen, there is a lot of manufacturing engineering and even product engineering input in order to simplify steps this way.

How do you get there? First, andon to visualize problems as they occur; all the grains of sand reality throws at you to make you struggle. As you see on the line, there is a rope all along that team members pull when they have a doubt and need a second opinion. Throughout the video, we hear the music of andons being pulled.

Then, Yamazumi. Here are three rare photos I have, dating back to the NUMMI days (yes, I know, 30 years ago now) that describe the process of coordinators looking at each station in great detail.

There is no way around it. The fluidity we see on the line is the result of andon (flagging every problem), yamazumi (looking for one-second waste) and kaizen (creative ideas and trying stuff).

Sequence: The second thing to see on the Toyota line is the “ballet” effect, how coordinated team members are when two work on a task. They seem to find themselves at the right time at the right place every time and never have to wait for one another. Beyond being confident in each task to achieve this, team members have to also be completely confident in what step to take next, in the sequence of tasks needed to perform the job.

Similarly, to eliminating struggle, this means delving in the details, with standardized work this time – clarifying time after time the exact sequence of steps to get the job right, as you would in sports.

Here’s another example from the NUMMI days: 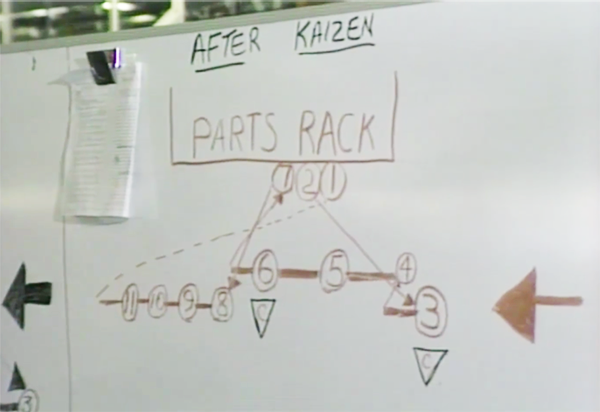 This means hours of working together to iron out detail after detail of what goes where: feet, hands, eyes.

Through kaizen – how would you improve this?

The third fascinating part in the Tsutsumi video is support. If you look at the tools themselves, they’re at hand, they follow the team members, they finish the job when human eyes are no longer required and they return to their at-hand position. 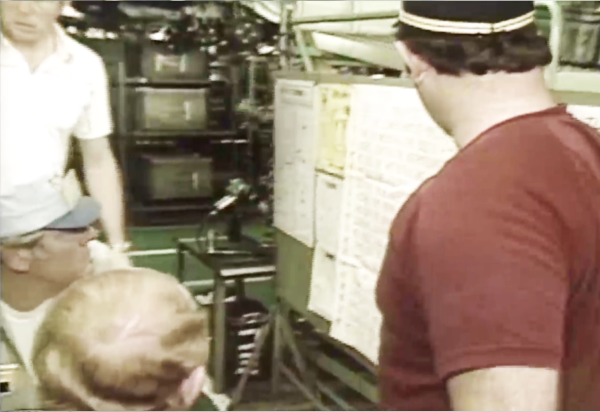 This is an illustration of the “separate human work from machine work” jidoka principle, and here again the smoothness and seamlessness in the way tools integrate in the work cycle is striking, and not through heavy automation either, but smart use of “karakuri” principles, simple, low-energy devices from, no surprise, more kaizen.

On the whole, it’s clear the pace is much faster and work denser in the Toyota line … so what’s in it for the team members? To explore this, it’s important to ask ourselves how to evaluate work, which is physical, certainly, but psychological as well. In psychological terms, humans feel good in a situation if they feel, essentially:

I personally feel that visiting Toyota plants to this day is important because it refocuses me on the basics: can I see one-second waste? This is easy to see in normal plants, but in a Toyota plant, much more subtle. Can I see variety? It’s also easy to think all cars are the same, just as we often believe all customers are alike, but of course, they’re not – a Toyota plant is a constant reminder of producing one-by-one. Can I see the engineering trick? Yes, kaizen is the key to fluidity, but in many cases, there’s an engineering input, either at product or manufacturing engineering level that makes it possible, from either Toyota or suppliers. It’s a constant challenge to look beyond the team-level kaizen for the engineering tricks of the trade.

To be blunt, I don’t believe that Toyota techniques can be copied outside of the specifics of the automotive industry. I do believe they’re an incredible source of inspiration when we try to think them through in software, healthcare, service or any other situation. Visiting Toyota lines remains both refreshing and challenging because while we struggle to understand, they keep moving ahead, giving us every more puzzles to figure out.

As well as always returning to the basics.

According to Prof. Takeuchi Nonaka, Toyota sees itself as a “green tomato,” (at 5:35 on video) — always growing, never ripe. I love this image because, as a writer, I know that a sense of incompleteness is what keeps people hooked on the plot. In might be just me, but visiting Toyota factories give me this sense of incompletion, of dissatisfaction – there must be a better way and hope because we can see people still looking for better ways without second thoughts. To answer your question, Toyota remains, after all these years, both challenge and inspiration.