The Lean Post / Articles / Why Doesn’t Lean Have a Seat at the Table?

Lean Production, as an approach to managing complex operations, was introduced more than 30 years ago. Yet, despite decades of Lean thinking and practice, the utter dominance of its industry by Toyota (the inspiration for lean), and the well-documented gains by those enterprises that have practiced lean in a high fidelity fashion, Lean is often viewed as a shop-floor skilled trade, to be assigned to subject matter experts in staff (not line) roles; and conducted through programs and initiatives rather than as fundamental to the means and methods of the firm.

A key reason is that Lean in particular, and other methods of achieving outstanding operations more generally, are primarily taught as the practice of tools and techniques—and not as a complete, coherent system of thinking that addresses the strategic concerns of senior leadership.

Think, for example, about how “C-level” topics are taught and practiced. Finance, for instance, is grounded in theory: basic thinking about how, say, to value transactions. Getting paid sooner rather than later is better; having the right (option) to delay decisions is better; and diversifying versus concentrating risk is better. From three simple principles, a wealth of models can be constructed, scenarios can be considered, and decisions grounded in sound theory can be made. Similarly, strategy is also taught and practiced on the basis of theory, about how to create and capture value. In Michael Porter’s competitive advantage parlance, we want to construct barriers that prevent customers and suppliers from defecting, thereby strengthening their dependency on us and our ability to extract value from the situation. We also want to construct barriers to prevent intruders, thereby protecting us from vulnerabilities that would diminish our ability to create and capture value. Out of those simple ideas, strategists can construct and consider myriad possibilities.

Yet, that same ‘basic thinking,’ cause and effect based approach is not how Lean, Six Sigma, or the more recent Agile are taught and practiced.  More commonly, operations-oriented thinking is presented as collections of tools—value stream maps, pull systems, standard work, poke yoke, 4-, 5-, or 6-S for lean—without an explanation or understanding of how why or when their use is appropriate. What happens? In too many cases, Lean (or Six Sigma) gets practiced in a cultish fashion—devotees measuring fidelity through ritualistic use of tools. Or, it gets practiced in an analogous fashion—this situation looks like high volume repeatable manufacturing, so Lean applies. This situation does not look like high volume repeatable manufacturing, so Lean does not.

That’s unfortunate, because as created and practiced at Toyota at the highest levels, TPS is an expression of sound theory about how to manage the complex and dynamic systems through which value is created and delivered.

The premise is that when we gather people to work across myriad disciplines towards common purpose, what they’re doing, why they’re doing it, and how they’re doing it will be subject to countless errors, misunderstandings, mistakes, and difficulties. Therefore, if we want a system to perform, then it must constantly be generating feedback to draw our attention to what is going wrong, so we can contain the problem and immediately swarm it to understand its causes and to develop corrective actions.

How do we build such feedback into systems? First, we make a strong declaration of what we believe will actually work. So, we build heijunka boxes (as one example) as a way to give expression to the customer demands we are expected to satisfy; we construct value stream maps for sequential operations as our “best guess” of what has to get done, in what order, by whom to succeed in meeting that demand; we declare how work will be triggered and released (in a pull system), and we create standard work to increase the chance that the people responsible for individual work components will succeed.

In Toyota’s often copied temple, all this “declaration” loads on the Just in Time pillar.

There’s more, however. Given that we are going to be wrong about something, we need to find out early often, so we can both contain the problem before it metastasizes and as a trigger to swarm the problem, understand its causes, to construct corrective actions. In Toyota’s parlance, that is the jidoka pillar, more generalized as being sure there are tests built into work to call out problems early and often. Poke yoke, andon, and the like all grow out of that belief that since surprises always occur, we need to see those so they can be quickly solved. 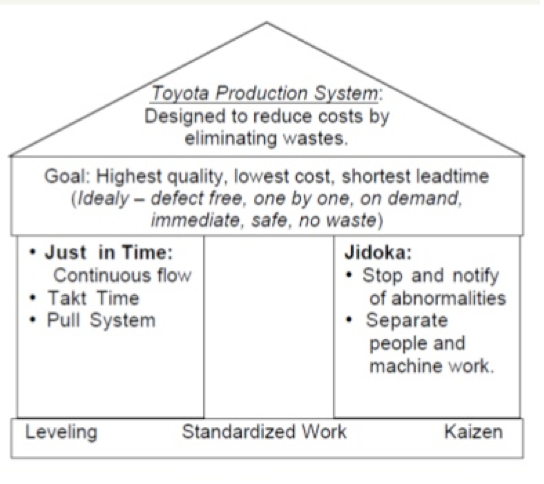 So, where does that leave us? Well, we probably want to avoid talking about Lean in ritualistic terms, we want to avoid advocating for Lean just because Toyota does it, and we want to avoid defining Lean by tools and particular practices alone. After all, a skilled electrician rarely joins the Board for high-level conversations.

Rather, we should anchor on the fact that enterprises exist to create and deliver value to someone appreciative. Doing so demands having knowledge about what to do and how to do it. All of that is built up by saying what we think we know (eg standard work), finding out what we don’t know (jidoka, poke yoke), and improving what we think and what we do (kaizen). Keeping this manta simple—success depends on relentlessly building capability, and capability is built by the clarity of feedback and the discipline of response—gives us the chance from spreading Lean from being viewed as (sometimes somewhere) useful shop floor tools to a more general pervasive way of thinking about how we conduct our business.