We led a successful process improvement project last year that looking back now, we realize could easily not have gone well. To some extent our success was a matter of luck. We could have done all of the right things and still failed. We had three different organizations involved with three different sets of goals/values, there was the potential for friction between the groups (caused by the old process), and since we volunteered our time to help another organization – there was always the chance of being perceived as outsiders coming in to “fix things,” instead of working with people.

Last year, our company (a large manufacturing organization) was asked by the Newport News City Council to run a process improvement (kaizen) event for the Newport News Police Department. Given our experience conducting kaizen events, they wanted us to help them improve their booking process. Their real goal was to free up police officer time so they could get police officers back on the street more quickly, in order to respond to community emergencies in a more timely manner. As part of our “Community Relations” efforts at my company, we (Erin Magee-Hall and Robert Downing) volunteered to lead their team in a process improvement event for just this purpose.

During our initial meeting with Chief Myers (Newport News Police Department), we realized that any changes to the booking process would impact the Sheriff’s Department and the Office of the Magistrate. We suggested that Chief Myers, Chief Magistrate Olliver, and Sheriff Morgan jointly act as sponsors the event. Chief Myers agreed with the approach. We then met with all three sponsors to discuss what typically happens during a process improvement workshop like this (including pre-work and follow-up activities), and discussed what support we hoped sponsors would provide for the team’s process improvement efforts. We received assurances of their support, including their willingness to adopt the recommendations of workshop participants.

Next, we began planning with all three organizations for a four-day Value Stream Mapping event to be held the following month. Prior to the event, we went to the “gemba” (the arrest/booking area in this case) to better understand the current state. We interviewed jail personnel and observed the entire process from booking to release. We visited the Magistrates’ area to review arraignment processes. We examined the flow of the process including the physical set-up of the magistrates’ office area and the police entry area into booking and even parking.

At the start of the kaizen event itself we shared with with the team some basic introductions about what would all be doing together, and gave a brief overview of lean thinking and philosophy. Then we asked team members to tell us about their frustrations with the current booking process, which together we captured on 80+ post-it notes on the current state map. Participants then examined the current process and developed recommendations for improvement toward a future state. Based on the team’s recommendations, a pilot project for the new arrestee intake process was conducted at the jail the following week. The old process took approximately 1 hour. The first officer through the new process returned to his precinct and reported that the new intake process took 11 minutes. No one believed him – they thought he was joking – he wasn’t.

Changes that were made included: moving some of the booking process responsibilities from the police officers to the deputies, having an assigned sheriff position created to help with arrestees, bringing the initial medical assessment step of the process up so earlier so this is immediately available, improving flow (parking and entrance into the facility), and more clearly defining requirements for when hospital treatment is needed prior to booking.

When these recommendations were reported to the Police Department’s senior staff, we were told that there were “gasps” in the room. The new process far exceeded everyone’s expectations. The initial changes resulted in a better process for everyone and over 3,000 hours of annual savings in police officer time (this is the equivalent of 1 ½ extra police officers on the street). Finally, the team established an Intake Advisory Team (IAT) to help implement recommendations and continue reducing processing times.

One month later, we delivered a formal report-out of the team’s recommendations to the Police Chief, the Sheriff’s department, and the Office of the Magistrate. Both the Sheriff’s deputies and Magistrates stated that the new process was better. One of the magistrates stated that the new process was “100 times better” and that “we should have been doing this all along.” All of the team’s recommendations were adopted, and this event was seen as a success. The time savings were significant and team members were championing the changes going forward. Further, we recognized by the Newport News Sheriff’s Department – at their 9th Annual Promotion and Awards Ceremony, where the entire process improvement team received the Group Achievement Award.

In the end, here is what I think contributed to our success:

It was all about creating trusting, collaborative relationships.

In retrospect, we hope that this project and our partnership with the Newport News Police Department contributed to building a stronger community. And, at a personal level, it was particularly satisfying to help improve the work lives of the police officers, the sheriff’s deputies, and the magistrates. Additionally, this event further demonstrated that lean principles can be successfully applied in non-traditional (non-manufacturing) organizations. 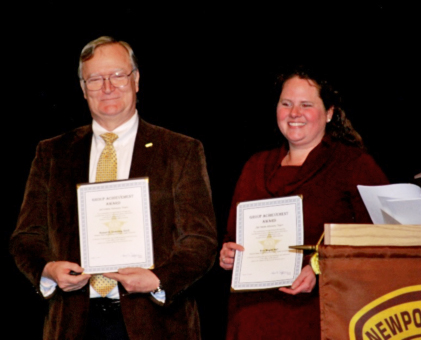 About Robert Downing and Erin Magee-Hall

Dr. Robert Downing has more than 25 years of experience in OD, and Human Resources and Process Improvement (where he facilitated more than 100 process improvement events).

He is a frequent presenter at state, regional and national conferences, and has more than 40 publications (Harvard Business Working Knowledge, Personnel Administration, The Journal of Career Planning and Employment, HR Magazine, Chief Learning Officer, and Labor Law Journal).

Erin Magee-Hall is Lean certified and has a Project Management Certification from the Old Dominion University.  She has twice been a presenter at international AME Lean conferences (Greening Lean Processes). She has been a guiding force for company-wide 5S+ projects. Erin has a bachelor’s degree in Environmental Studies and a Master in Business Administration.

Erin has more than 10 years of experience in Environmental Engineering, OD, and team/group facilitation.