I keep hearing that a tool approach to lean is wrong, but tools deliver results – how can that be wrong?

There’s nothing wrong with tools – the debate is how the tools are used. This debate ranges from humble 5S to lofty hoshin kanri. The deeper question is your theory about “results.” Are you:

I was last week on the gemba in a traditional service company that is working hard at embracing digital change. The leaders debated the hoshin plan about digitalization, one of the smartest young executives of the company demonstrated the first version of a smartphone app, all well – and impressive for such a traditional company. They’re moving along, and they’re doing so by encouraging new talent and new thinking.

Then we walked down to the warehouse… which was a complete mess. Well, mess is not the right term. It would have looked good on photos as it was tidy, but when you looked in details, heavy dangerous parts were stored high up, boxes were mixed up, there was no visual sense of lead-time. It was just tidy.

The age-old debate in that place is that the logistics manager understands 5S as a way to keep his warehouse ordered – and senior management stays out of it. So, he tells his guys what to put where and chases after them regularly with clean up time-outs and so on. But of course, in the day-to-day of work since the team doesn’t understand the purpose of the 5S, unused parts accumulate in corners, old stuff stacks up and so on.

The logistics manager has his quick visible results – but they’re never sustainable and, truth be told, after the initial gain have been achieved (the very first 5S drive did reduce surfaces spectacularly), there hasn’t been much performance improvement.

This is a strategic issue because as part of the hoshin plan, this company intends to become the “Amazon” of spare parts in the industry. The goal is that competitors should order their own parts with them because it is easier so that they become the first search point for the entire industry. This is a clever strategy… which requires Amazon level warehousing – without amazon level access to capital and investment.

5S is not a tool to have a cleaner shop floor. It’s a tool to develop practical decision making in all employees every day:

5S can, therefore, be used either as a way to beat people into having a tidy-ish workplace by forcing them to sort, straighten, shine, and so on. Or it can be used as a self-study and self-development tool to get people to observe their own working practice (why, exactly, do I keep two piles of papers on my desk?) and act by making small – but nevertheless difficult – choices daily. And, in doing so, understand more deeply how they work and how they could work better.

I love studying lean, I truly do, because when done right it is the only management method I know that allows for true self-development. Back in the early XIXth century when industry was discovering Taylor’s methods of setting processes by engineers for operators to follow to the letter without thinking or asking questions, Sakichi Toyoda was reading Samuel Smiles’ Self-Help book (literally, the first book of the self-help literature) that praised initiative and showed how gifted individuals lifted themselves from their conditions by pulling themselves up by their own bootstraps by … learning (Toyoda’s copy is still on display at the Toyota museum).

Yes, the tools are powerful. They can be used for compliance, and indeed have quick, visible results that will never be sustainable or offer a way to go beyond the low-hanging fruit (try to get out of that dead-end though, when you’ve gone down that route!). Or they can be used to develop initiative and judgment so that people, understanding deeper aspects of their work, learn to bring smarts and care to everything else they do in the job – from welcoming a customer, to tackling a tricky task, to surrounding themselves with the right co-workers and so on.

Without the tools, such as 5S, kanban or kaizen, there can be no self-study or learning. But applying the tools as “best practices” to be forced on people doesn’t do much either beyond early apparent results (which is all many managers ask for, sadly). However, using the tools to develop initiative daily and encourage self-development, increases the flow of ideas and delivers an endless stream of continuous practical improvement that builds up into competitive performance. As Ohno is quoted saying: “Once you discover the bountiful results of kaizen improvements, you will continue forever in the spirit of kaizen.” But to understand kaizen with a small “k” you also need to grasp kaizen with a capital K: progress through process improvement, through people self-improvement. 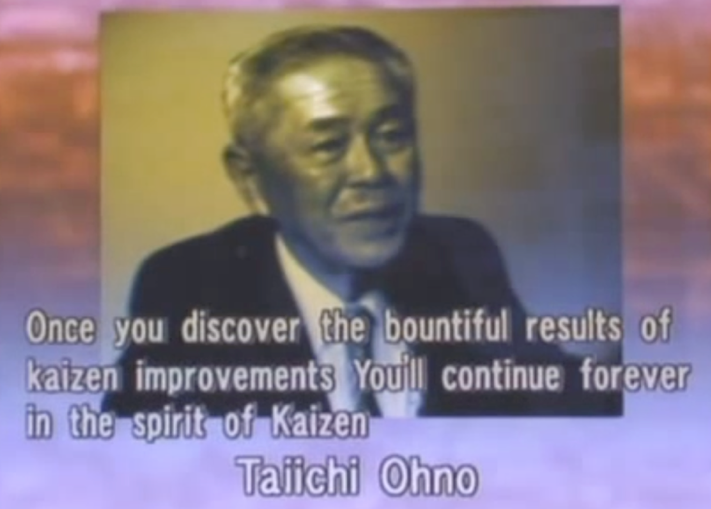