The Lean Post / Articles / How the A3 Process Developed to Help Build Better Managers, Part Two

As promised yesterday, Yoshino has uncovered some important artifacts, including the A3 crafted by Kan-Pro architect Mikio Sugiura when he was reflecting on the results of the landmark initiative. With the launch of Katie Anderson’s new book Learning to Lead, Leading to Learn: Lessons from Isao Yoshino, now is a good time to dive more deeply into the topic of A3 and, more specifically, into the training program called “Kan-Pro”.

Today we will explore that A3 capturing the summary and reflections of Mr. Sugiura as well as some of our own reflections exactly 40 years later. 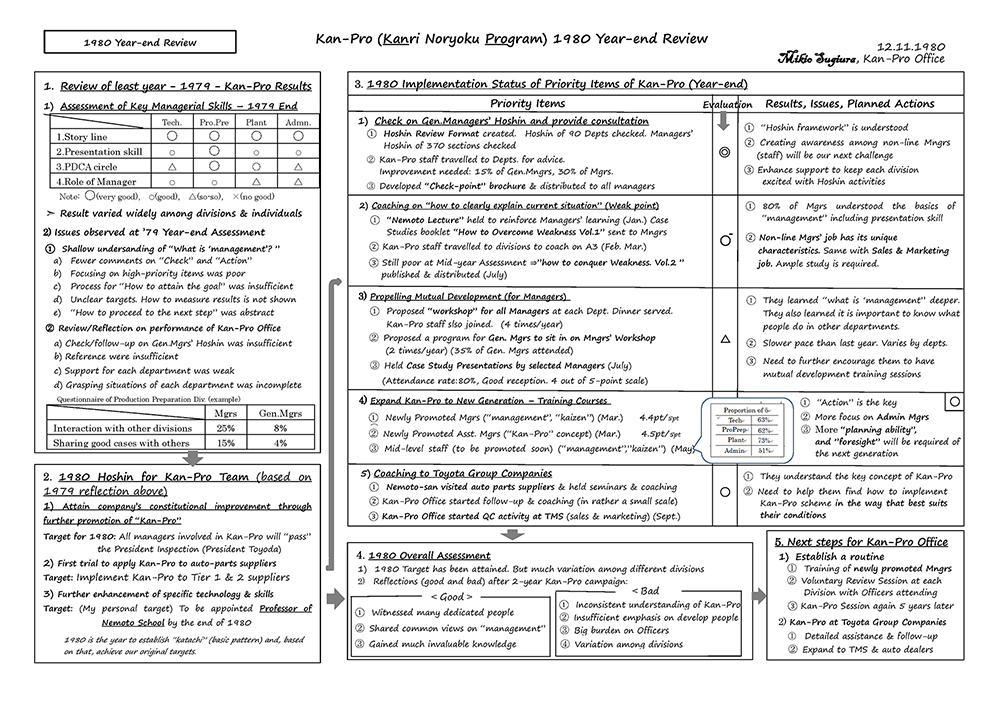 Note that this A3 is the year-end Hoshin A3 for Kan-Pro, the major activity for the year of the group Mr. Sugiura was managing, a unique department in Toyota called the “Corporate Planning Office.” This group was roughly analogous in the knowledge (office) work environment to the more famous OMC (Operations Management Consulting – responsible for advancing TPS throughout the company’s extended manufacturing organization, including suppliers) office within the company’s critical Production Control Department.

While the 1970s were an incredibly successful decade for Toyota, in hindsight it is clear to us that management struggled mightily to keep up with the breakneck growth that the company was experiencing. Many of the operating systems we are familiar with today were either born or became mature during this period. As managers struggled merely to keep their heads above water, senior management led by Eiji Toyoda noticed a decline in enthusiasm for the TQC processes that were established in the 1960s and worried especially that, with the growth in number of employees, managers were not adequately tending to the nurturing of the younger generation. Mr. Nemoto, who had led the 1960s TQM initiative, assigned Mr. Sugiura to do something about it. Kan-Pro was the result.

We’d like to highlight a few points contained in the A3:

One of the hallmarks of a successfully executed A3 process is that it is a collaborative activity (“it takes 2 to A3”), a learning process for everyone involved. For learner and teacher, senpai and kohai, sensei and deshi. The A3 paper is simply a convenience, a job aid to facilitate structured discovery. In this case, too, the 1000 trainees learned, but so did Mr. Sugiura, Isao, and the company.

The company learned, as acknowledged openly by the senior managers.

Isao himself learned tremendously through reading and analyzing 1000 A3s. As Isao noted in our 2016 Lean Post, “Strikingly, I discovered that managers whose A3s were excellent were also excellent managers at work.” Through Kan-Pro, the A3 process was more than a mere mechanical problem analysis tool –it evolved to become a fully socio-technical process.

John experienced this directly five years later, not only from direct coaching from Isao and others, but from taking the exact managerial training courses that incorporated learnings from Kan-Pro and referenced in Mr. Sugiura’s A3. And over the succeeding decades, countless individuals in thousands of companies have learned from the process as well.

The overall program was never repeated, but key aspects of it were incorporated into the company’s manager training programs, and annual corporate-wide hoshin planning kanri process.

As we concluded in our posts of 2016, it is important to remember that what is important is the development of people, not specific artifacts such as training programs or A3 processes. It is critical to address critical questions. Are all the members of our organizations being given the opportunity to develop to the fullest of their potential? Are capabilities needed for the organization to survive and thrive being developed? In short, we want to constantly confirm and address the ever-changing managerial needs of our enterprises.

We think any organization is well advised to periodically assess and take measures to actively develop its managers. Kan-Pro represents Toyota’s effort in this regard as its go-go decade of the 1970s came to a close. With the turbulence impacting your organization today, how are your managers faring? Are they equipped as they need to be? How about considering something similar to Kan-Pro in your organization today?

Learn more about the process of developing better managers by joining us at the LEI Lean Virtual Learning Experience. Also, join the free webinar by Mark Reich on August 20 discussing why you should link your hoshin kanri and A3 management processes.

Isao Yoshino is a Lecturer at Nagoya Gakuin University of Japan. Prior to joining academia, he spent 40 years at Toyota working in a number of managerial roles in a variety of departments. Most notably, he was one of the main driving forces behind Toyota’s little-known Kanri Nouryoku program, a development activity for knowledge-work managers that would instill the A3 as the go-to problem-solving process at Toyota.